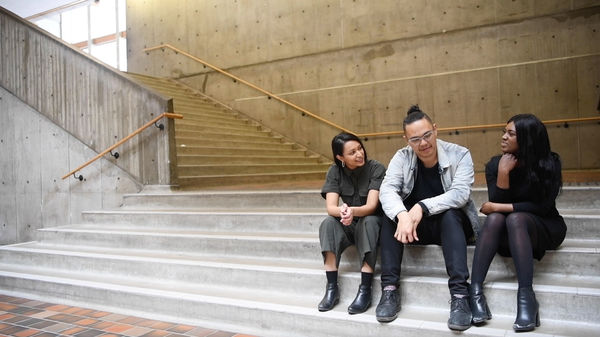 To busy writers, penning poems on the back of receipts, scribbling into notebooks on Line 3 — this is for you.

I rarely find time to sit down and write anymore. Instead, I create fragments wherever I go: writing the opening lines of a story on the train to work, thinking of a theme to center a poem around while eating lunch, trying to snatch a good metaphor before it floats away as I rinse the shampoo out of my hair.

A few of my writer friends have migrated southwest into the city, living, writing, and dreaming in Toronto. But for us who remain here in Scarborough - many of us still in our family homes - our life is often spent in transit, both figuratively and literally. Some of these friends are much better at carving out dedicated writing time but for those like me, we’re writing in the fleeting moments wherever we can find them.

This isn’t significantly different for how we wrote as students though. We all had part time jobs, were part of too many clubs, and juggling courses. I still remember taking the chlorine reading at the pool, eyes levelled with the meniscus, but mind already churning the story I was submitting for class.

Scarborough writers are busy writers, resourceful and persistent, finding time in those in between spaces. 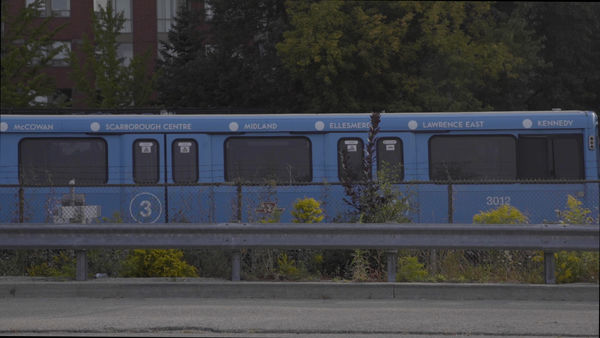 To writers who deny that they’re writers — this is for you.

I have a poetry collection coming out this autumn, yet I still hesitate to introduce myself as a poet. There is something heavy about that title makes me dread holding it. Perhaps it’s that it opens me up to scrutiny in a new way. I’d end up having those conversations about how I never studied poetry in my creative writing classes or how I was rejected from every MFA program I applied to. There is a fear, despite knowing that poets come from many pathways, that I’ll be considered a fraud.

When I was in university, we studied writers like Geoffrey Chaucer, Raymond Carver, and George Orwell. This is how I imagined real writers - huddled over vellum with their ink-dipped quill or perched on the edge of their desk, clattering on typewriter keys. I thought of Jack Kerouac’s adventurous road trips, winding trails taking him elsewhere.

Any time I’m plagued with self-doubt, I’m lucky to have the support of my friends. On more than one occasion, Leanne Toshiko Simpson has recounted all of my accomplishments. But more than that, she reminds me that the only qualification for being a writer is that you write. That every time I write a new poem or draft a short story - regardless of where it takes place or what I’m writing about - I’m a writer. That the only prerequisite to this is stringing words to words. 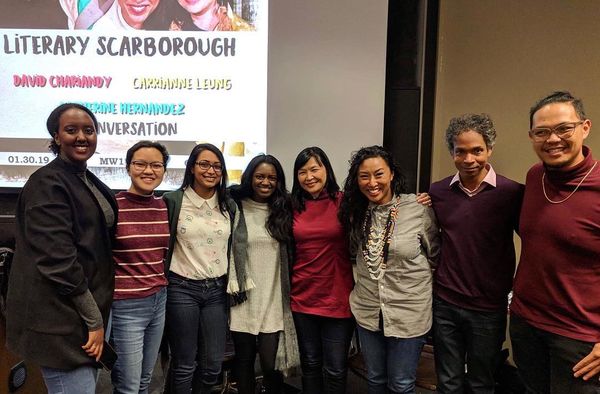 To the writers who paved the way — this is for you.

There was a time that I thought that Scarborough felt too small to write about. That setting a story here would feel insignificant. Up until recently, Scarborough was underfunded and overlooked for its cultural and artistic contributions. It’s clear that these kinds of narratives were the ones that took precedent in my mind.

And then came Scarborough and Brother and That Time I Loved You. Their success and their stories reminded me that this was a place of rich complexity. That this place, as many have described it before, was a microcosm of the world.

In Carrianne Leung’s column “Scarborough: A Setting,” she states:

Maxine Hong Kingston’s quote from Woman Warrior: “I learned to make my mind large, as the universe is large, so that there is room for paradoxes.”

In Scarborough, I made my mind large.

It was these books by Catherine Hernandez, David Chariandy, and Carrianne Leung that made me remember that Scarborough was the reason that I too made my mind large. That in this place, these paradoxes and contradictions, joys and sorrows, existed side by side.

Before any of these books came out, there was RISE. I think it’s fitting that Scarborough first found its footing in an open mic. Organized by poet Randell Adjei, RISE meets weekly at Burrows Hall. Musicians and poets and dancers all find themselves in this safe community space, sharing their work. Every time I went, I felt this same complexity and richness that I later felt from these novels. An energy that would radiate throughout my body. An energy that made me feel brave.

For the Scarborough writers who came before — I am so grateful. This new generation of writers that has sprung up in the past few years would not exist without you. 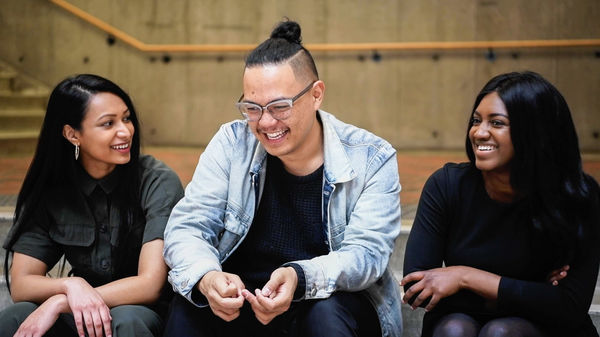 To writers who laugh until tears well in their eyes and their bellies ache — this is for you.

Scarborough is a funny place. It is sometimes hard to think of it that way because of how the media covers our home, making it into a space of violence or simplifying it to food mecca. But nestled within those industrial buildings, those family-run restaurants, and those strip malls are pure comedy.

Catherine Hernandez’s book Scarborough can be a heavy read. I think that, similar to Téa Mutonji’s book Shut Up You’re Pretty, most people like to lean into the tragedy of the book because it’s easy and forthcoming. The weight of it is apparent. You don’t have to work hard to see these moments of misfortune. But much like the suburb that the book is named after, the humour is apparent to anyone who has lived here. It lives in the subtext, in the delivery.

There is a scene that Catherine Hernandez read to a room at the University of Toronto Scarborough. In it, young Sylvie accompanies Mr. George to the dollar store where an altercation occurs. And while many people could read this scene as heavy with the chaos of the fight, that night the room was doubled over in laughter. It was the all too familiar details that got us: the white lady in the muumuu and the man in the UFC bandana and leather jacket. The customers, indifferent and impatient, still lined up waiting to make their purchase. The manager with a man bun, emerging from a hot boxed office. As said at the end of the chapter, “Just another day in Scarborough.”

A few years ago, my friends Diriye and Adrian tried to do a linguistic analysis of when to use the suffix -az/-azz, a part of Scarborough slang. What ensued was a set of over seven Instagram stories depicting the rules of when you could and could not add it to the end of a word. They were a mix of photos and videos, all with intentional overemphasis of each word. As I laughed at Adrian vocally illustrating that “destinationazz” was too many syllables, I couldn’t help but think that this was specifically Scarborough comedy. That many people on his Instagram were probably looking at this series confused and yet here I was, wiping tears from my eyes.

Scarborough writers - keep laughing at our niche jokes. It’s comedy for us and by us. 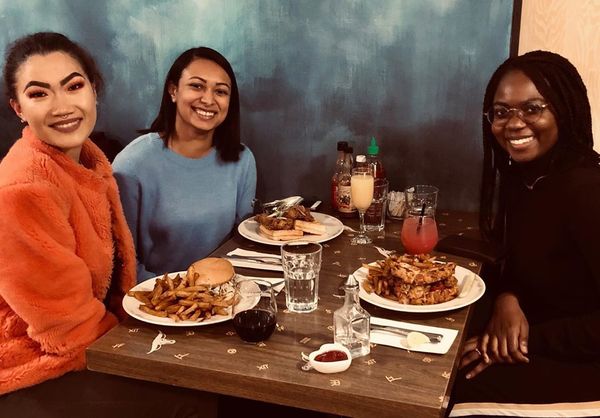 To Scarborough adjacents, with their resonance and warmth — this is for you.

When I visited Vancouver for the first time, I felt an instant kinship that I can’t explain. I stayed with Shazia Hafiz Ramji, and we were like two sides of the same coin. Both a little quiet, a little pensive, with an ease that made us comfortable around each other. There were many moments like that during my trip - whether it was Yilin Wang and I bonding about martial arts over noodles or Amanda Reaume yelling “get in loser, we’re going to a poetry reading.”

I got that same feeling in the back of a fancy Toronto restaurant when I met Jenny Heijun Wills. Téa had invited me as her plus one to the dinner ahead of the Writers’ Trust Gala, and I found myself awkward as ever. At the back of the bar, we found ourselves bonding over feeling out of place. Much like in Vancouver, there was an ease that we slipped into, as if we had known each other for years. I felt this again when I visited Winnipeg later that year - the kindness from both Jenny and another writer I had met at Banff, Chimwemwe Undi.

The literary scene can feel alienating and exclusive. So when I feel this warmth and synchronicity, I feel safe. It feels as though I am out with my fellow writers from Scarborough. I like to think that this kindness and willingness to support each other is the future.

Scarborough exists elsewhere throughout the world. When I was in Vancouver, many told me that David Chariandy’s novel Brother reminded them of the Downtown Eastside. In Toronto, Noor Khan and Sean Leon’s project PostScript drew a parallel between Scarborough and Parkdale. Anywhere there is a suburb that is overlooked, you’ll find artists blooming and thriving despite it all.

To Scarborough adjacents, those who just get it: you’re always welcome here. 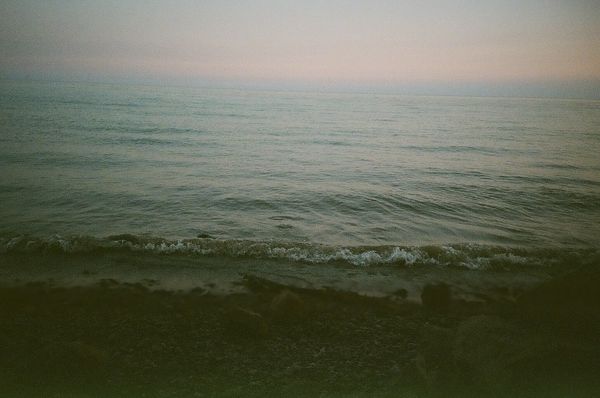 To my Scarborough writers with “all that desperate brilliance” — most of all, this is for you.

In David Chariandy’s essay “As Man,” he writes to his mentor Austin Clarke. He recounts looking at Clarke’s bookshelf, describing the collection as, “All of the luminaries, all of that desperate brilliance.”

That description lit something within me. I thought of Adrian’s technical precision, sharper than any blade. How Oubah’s poems left me deep in my own thoughts. Of Chelsea building new worlds, patching together universes. Of Téa, looking at the same story from different parts of the room. And Leanne, a willingness to be so raw and so vulnerable. Urgently brilliant work.

They say that Scarborough is having a moment, but we know better than that. We know what it’s like to be quietly hustling for years. We know how fleeting the recognition can be, and how to support each other as it comes and goes.

At the end of the piece, Chariandy states, “I saw among the spines your own books, Austin. For when you had the strength, you’d placed them where they belonged.”

For my Scarborough writers: when you don’t have the strength, I’ll do it for you.

I’ll line up all of our spines together on these shelves — “All of the luminaries, all of that desperate brilliance.” 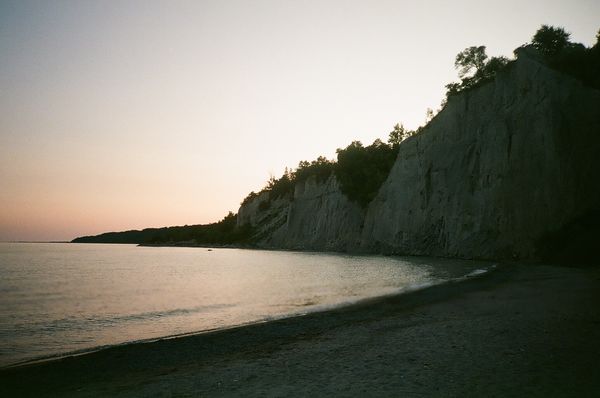