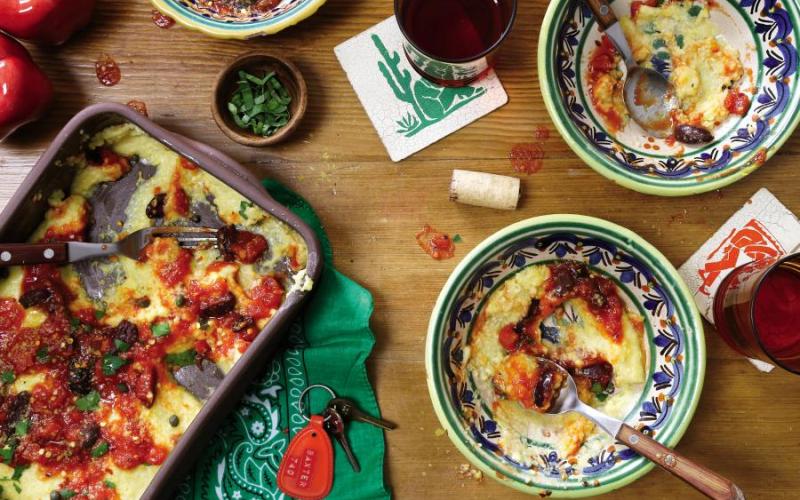 I just got a latte at Starbucks. My drink took a long time. While I waited I eavesdropped on a good chunk of a date, between a man and a woman, taking place at a table near the pick-up station. I believe it was a first date because the conversation was aggressively exploratory and awkwardly philosophical: How many siblings do you have? What are your desert island books? What in your opinion separates us from the animals?

With this last question, the woman argued it was food, specifically meals, that separate us from the animals. Animals, she posited, eat only for sustainability. (I think she meant sustenance.) Humans, meanwhile, make themselves all kinds of meals, with herbs and spices and many components that don’t contribute to the healthiness of the food, but do make the food more interesting. She thought of her dog, eating the same food every day for years. Just the vitamins, the goods. Doesn’t he get tired of it? She certainly would. The dog was named Murray. I wanted to know what kind of dog Murray was, but the man didn’t ask that question, or any other question. The woman was doing all the asking, and providing the only lengthy answers. She went on to say that it was well past Murray’s dinner time, and that Murray was probably wondering where she was, and that this had been really fun. Then they put their coats on. Then I got my latte.

I imagine architects would argue that what separates us from animals is buildings, and capitalists would cite wealth, and astronauts space travel, and historians memory. Once, when asked this question a long time ago, on an awkward first date of my own, I vouched for poetry. Language isn’t ours to claim: bees dance and dolphins click and birds coo, thereby saying something. But they aren’t saying poems. By dancing, the bee tells her roommates, “The flowers are over there,” but she does not bother to make the message more interesting. She does not infuse the information with commentary on the oppressive social system of which she is a member, nor with reflections on her childhood, or her love life. Just the facts, the goods. A poet is a human who goes further than this. She, the poet, has a day job and almost nobody’s attention, but she’s out there, going further, separating us from the animals. This was an iffy reply to provide and there was no second date.

People find poetry difficult one day. They don’t find it difficult at first – they write poems in elementary school, often ones that rhyme and suck. And then they stop writing poems, and reading poems. Poetry becomes some distant thing, though I think it’s the human, not the poetry, that has taken all those steps away. The goods of poetry are lost on most adults, who, when facing a poem, are known to go, “I don’t get it.” I’ve never understood this. The poem is right there. The words are there, and combined, they make the poem. By reading it, you’ve gotten it; it’s yours.

About a decade ago I was making poems out of those little magnetic words that riddle the fridges of English majors. My roommate kept interrupting my writing to open the fridge and fetch ingredients. She made steak and potatoes and capers for the both of us, because I had helped her edit an essay. Dinner was delicious. I asked how she made it so tasty. She said she just followed the recipe.

In that same kitchen, a couple months later, I started the first of the three kitchen fires I have been responsible for. I wanted to make sushi because I found sushi really tasty. I had bought the bamboo rolling thing and the seaweed icing things. I set water to boil then threw the rice in the pot. I figured it was like pasta: you boil it then drain it. I went upstairs to look it up on my desktop computer and make sure. Before googling “making rice,” I surfed around on dark-ages-era Facebook (no newsfeed, not yet). I headed back down to the kitchen to find that the rice pot was emitting a thick cylinder of smoke that collected at the ceiling, like an upside-down flood. The smoke seeped into the hallway and dining room via the tops of the doorways. The contents of the pot looked like pitch black houseflies all melted together. The fire alarm proved to be decorative. My three roommates came home one by one and independently asked what was up with the burnt popcorn smell, which persisted the following morning.

Two years later, in a different apartment, after watching Ratatouille in theatres, I decided to make ratatouille for my roommates. At some point I put an oven mitt on a still-hot element and made my second kitchen fire that way. I grabbed the fiery mitt and ran down the hall to the balcony, maybe to put it in the snow. As I ran I guess I changed my mind and ran the other way, to the bathroom sink. Once the tap water doused everything I was able to determine that my skin was burned a little, wrist to elbow.

And then the third fire was with frozen fish, about three years ago. I put them on a baking tray, straight from the freezer, and turned the oven to 475 degrees Celsius, misunderstanding the package’s instructions. My roommate suggested that I thaw them first. I shrugged, and I actually said out loud, “What’s the worst that could happen?”

There is a book I own that I only read while standing up. I read it in pieces – page 36, then page 10, then page 140 – and never cover-to-cover. I read some pages frequently, and other pages I always skip. I would not take it, nor any books of its genre, on an airplane, or to the beach. I would not read it in the shade of a tree. While writing this essay, I left this book on my living room couch; coming home, my partner asked what it doing was there.

It’s a cookbook, the first book of its kind that’s truly mine. It’s called Thug Kitchen. Maybe you’ve seen it or bought it. It’s full of swear words. “Fold in the olives and let that shit cook together over medium-low heat,” it instructs the reader, who is making polenta puttanesca; “Serve right away and top with some parsley or basil and whateverthefuck else you want.” Its recipes are vegan, although it doesn’t use that word. Itcontains personal language, but it’s mostly in the second person; you, the reader, are ordered around, and talked out of spending your hard-earned money on fast food. Thug Kitchen is meant for those who don’t know how to cook. Those who would sooner spend twenty minutes walking to Harvey’s and back than spend twenty minutes making a plate of polenta puttanesca. Those whose skill levels in the kitchen have resulted in numerous fires. This book is meant for me.

Most houses I visit, the cookbooks don’t live with the rest of the books. They live in the kitchen, in their own little dominion. Their pages are warped, from wet hands turning them, or blobs of half-made dressings dripping onto them. They are made of paper and glue and words and pictures, and they are literature, but they don’t register as literature. They are consumed and categorized as some other thing. I remember once talking with a coworker who admitted that she hated to read books, and owned none. Then five minutes later, she realized she had misspoken. “What am I thinking?” she said. “I own shitloads of books. But they’re cookbooks.”

There’s a fascinating contrast between Thug and another recent bestselling vegan cookbook, Oh She Glows. This book, by Ontario blogger Angela Liddon, advocates for veganism just like Thug does, but with a softer and closer-by voice: “When I made the switch to a whole foods vegan diet five years ago, I witnessed a powerful transformation in myself. After a decade of struggling with an eating disorder and subsisting on low-calorie, processed ‘diet’ foods, I knew I needed to change my life, and my health, for the better.” Here, personal language is employed at length as well, but it’s the first person, not the second. Liddon is decidedly present, and decidedly human. But the two books, Thug and Glows, can be found in the same section of the bookstore, for their offerings have so much in common. They share a pedigree, a mission. You give them money, and they make your food more interesting.

What is the recipe’s closest relative? What is the cookbook’s? Reading Thug, I think of Toronto poet Daniel Jones’ vulgar collection The Brave Never Write Poetry. Reading Glows, I think of a different Toronto poet, Rupi Kaur. These are two poets who broke into the mainstream (Kaur exponentially more so). Their books can be found on many bookshelves that are otherwise free of poetry.

And there, on my own bookshelf, sits Thug, alone, the widest spine by far in a police line-up of poetry collections no thicker than smartphones.

A book of poems is like a cookbook. There is a kindred soulship there. If you tear out one page of either type of book, the page can still live on its own. You might opt to write a page out in your notebook, or on a card. You might consult the table of contents and flip to the title you find most appealing. The first page you read might be the hundredth page of the book. You can read it in reverse and learn the same lessons as you would learn reading forward. The lessons would arrive piecemeal either way. You can give it your attention thirty seconds at a time, while reading it correctly.

With this in mind, I’ve become receptive to a new genre. Having spent years reading poems (years that might have been better spent learning recipes), I’ve come to understand – to get – cookbooks. Like poetry books, they impart things, but instead of how to feel, they tell you what to eat. The end result of both is a healthier human. I want to be healthy in more ways each year. By pointing this out in a small essay on the Internet, I hope to convince a reader, maybe two, that this could go both ways. A person with cookbooks in her life might do well to jam a poetry collection amongst them. Nourishment is nourishment; to read is to read.