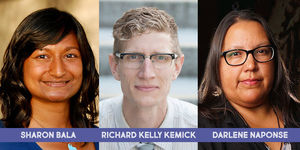 The Writers’ Trust/McClelland & Stewart Journey Prize has an almost uncanny track record of singling out emerging writers who will go on to become the heavy hitters of CanLit. This year, the three shortlisted authors who (if the prize's history is anything to go by) we can expect great things from are: Sharon Bala, Richard Kelly Kemick, and Darlene Naponse.

The $10,000 award is a unique one not only for its success in tapping talented authors early in their careers, but also for its funding model. The prize takes its name from James Michener's novel, Journey, the royalties from which were donated in perpetuity to fund the prize. Each year, an anthology (The Journey Prize Stories) is put together from the prize's longlist. 2017 will mark the 29th time The Journey Prize Stories (McClelland & Stewart) has been published, with this year's collection featuring 12 stories, including the three shortlisted pieces. The anthology will be available for purchase September 26. Both Bala and Kemick each have two stories in the 2017 anthology.

The three finalists were selected by a jury composed of writers Kevin Hardcastle, Grace O’Connell, and Ayelet Tsabari. All submissions are judged blind, without knowledge of the writer or the journal which submitted the story. 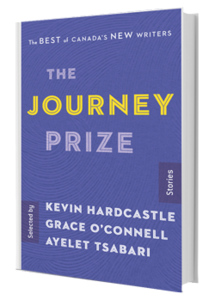 The Journey Prize honours the best short stories published in the previous year in a Canadian literary journal. This year, the winner will be announced on November 14 at the Writers' Trust annual awards event at the CBC Glenn Gould Studio in Toronto (which includes the presentation of several other prestigious awards, including the Rogers Fiction Prize and the Weston Prize for Nonfiction).

Past winners of the Journey Prize include Yann Martel, Alissa York, Saleema Nawaz, and Yasuko Thanh, while past short-listed authors include Heather O'Neill, Rebecca Rosenblum, Lee Henderson, and Charlotte Gill.