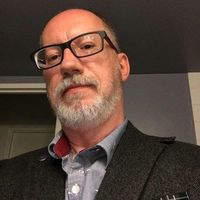 David Demchuk made history when his debut novel The Bone Mother (ChiZine Publications) was included on the 2017 Scotiabank Giller Prize longlist. Not only was it a debut novel from the screenwriter and playwright (notable and exciting, but debuts do occasionally pop up on the Giller list), but The Bone Mother is also a horror novel - the first of its genre to capture a nomination for Canada's heftiest fiction prize.

Demchuk's writing didn't require a prize nod though to be acknowledged as some of Canada's finest and most innovative. The Bone Mother tells the story of three villages on the Ukrainian/Romanian border: an uncanny area where mythical creatures of Eastern Europe find safe harbour. Absorbing, wonderfully scary, and imbued with the pleasurable strangeness of a fairy tale, the book lets the creatures tell their own stories, from the woman/wolf shapeshifter known as a Vovkulaka to the titular Bone Mother, an iron-toothed crone who eats anyone who fails her nearly impossible challenges.

We are thrilled to announce that David will be our March 2018 writer-in-residence here on Open Book! Be sure to head over the WIR page to check out his posts, beginning tomorrow.

Today, you can get to know David here, through our newest interview series, Going Pros and Cons, which asks authors to share their behind the scenes experiences from the professional writing and publishing process.

David tells us about his 35 years of professional writing experience, a memorable reading in a Montreal strip club, and getting good advice from the amazing Derek McCormack.

We couldn't be more excited to have David as part of the Open Book team for this March. Be sure to check out his posts!

I’ve been writing professionally for about 35 years, so I’ve had many triumphs big and small (and quite a few disappointments). However, my first truly big publishing victory would have to be my 2017 Giller Prize nomination for my book The Bone Mother. It was a tremendous honour, and has continued to have a significant impact well after the winner was announced.

I was delighted to read from The Bone Mother as part of the Halloween 2017 edition of Montreal’s LGBTQ reading series The Violet Hour - which takes place monthly at Stock Bar, a gay strip club on Rue Ste-Catherine Est. While it was not my first time on a strip club stage - ! - it was my first time reading on one. The room was fairly full and very receptive, and the crowd included several of my French work colleagues. Plus I was in the company of several other fine writers from across Canada. It was a terrific evening and a great venue!

I’ll tell you what I was told by my friend Derek McCormack when The Bone Mother was accepted by ChiZine Publications: “David, whenever possible, take the edits.” First, by the time you finish your submission draft, you have very likely lost some perspective on your book and may be feeling a little lost. A good editor will help you refocus and see your book through fresh eyes. Second, your editor asks questions, senses problems and raises issues on behalf of the publisher, the distributors and booksellers, and the eventual reader. Your editor is on your team and they have your back. They want to help you make your work the best it can possibly be. Finally, accepting and embracing the majority of the edits helps establish that you are open and willing to engage in the process - so that if you do encounter an edit you need to challenge, you will be seen as a partner in the process and not someone who’s arbitrarily adversarial or overly precious about their work.

Familiarize yourself with potential publishers and their work, and have a clear sense of how yours fits in with their back catalogue, their announced publications and their overall vision as a company. I owned and read many of ChiZine’s books before I ever thought to write something for them, and I felt a strong connection to the work they were producing. When the time came to submit The Bone Mother for consideration, I asked my friend Tony Burgess, who had published with them in the past, if he would be willing to advocate on my behalf, and he generously agreed. I think this gave me and my manuscript a certain amount of credibility, considering I was otherwise a totally unknown quantity submitting from out of left field. I would also suggest going out to festivals, conferences, conventions and workshops, listening to editors and publishers on panels and in presentations, and introducing yourself. Ask what kind of work they’re looking for, and have an elevator pitch prepared in case they’re curious. Don’t be aggressive or overwhelming - but also don’t be shy.

The thing(s) I need at/during/before an event or reading:

To rehearse! I am surprised at the number of writers who arrive at a venue without reading over and marking up the material (in some cases arriving without having chosen what they’ll read). The more familiar I am with my text, the more I’ll be able to engage with my audience, the fewer surprises I’ll face as I turn each page, the better I’ll be able to pace myself, and the fewer mistakes I’ll make.

Music. This is a recent change, and it still surprises me, after decades of needing quiet and stillness and solitude in order to write. I bought a high-end internet radio shortly before I started writing The Bone Mother as a Christmas gift to myself, and found a stream that I particularly enjoyed - a psychedelic chill station in Goa, of all things. A few weeks later, the night I wrote the first piece for the book, I forgot I had the station on and I found I was able to slip into ‘the zone’ much more easily than usual. That stream was the source of my writing music throughout the entire book, and I continue to keep it playing as I write today. (I’m listening to it now as I answer these questions!)

Longlisted for the Scotiabank Giller Prize!

Three neighbouring villages on the Ukrainian/Romanian border are the final refuge for the last of the mythical creatures of Eastern Europe. Now, on the eve of the war that may eradicate their kind—and with the ruthless Night Police descending upon their sanctuary—they tell their stories and confront their destinies.

Eerie and unsettling like the best fairy tales, these incisor-sharp portraits of ghosts, witches, sirens, and seers—and the mortals who live at their side and in their thrall—will chill your marrow and tear at your heart.