The strange, dark, and beautiful world of Audrée Wilhelmy's The Body of the Beasts (House of Anansi Press, translated by Susan Ouriou) is an utterly captivating one. In the novel, the Borya family lives in total isolation until a stranger shows up - wild, covered in scars, and destined to change their family forever.

We're excited to present a short excerpt from The Body of the Beasts today, where we get a glimpse of Mie's otherworldly abilities and her rising discomfort and fascination with her changing body.

Excerpt from The Body of the Beasts by Audrée Wilhelmy, translated by Susan Ouriou 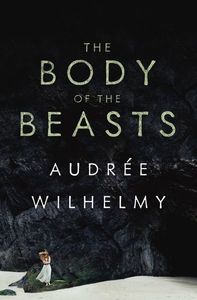 Mie is doing it again. She scrunches up her mind and imagines herself tugging on a string so its matter emerges from her ear and shimmers before her, malleable as a scrap of fabric; she rolls it up tight and slides it into the brain of another, that of a fish soon to perish, an ant, or one of the great stags braying on the edge of the forest.

She is lying on the bed. Her twelve-year-old shape shows beneath the sheet: even covered, she feels exposed. She has no idea how to tame her nakedness, it’s a sort of animal inside which her mind is incapable of penetrating. So she grasps a morsel of her consciousness and thrusts it into the skull of the great blue heron alighting on the window ledge, she clucks her tongue against the roof of her mouth and it takes off, all long legs and greyish-blue feathers, above the coast.

She gains altitude with the bird. She rises above the lighthouse, sees the rocks of the craggy foreshore appearing like an army beneath the waves, the bands of golden sand, the seaweed and crabs teeming underneath, the lagoon; she spots Seth and Abel, minuscule from on high, lining up hare carcasses on a pyre of rocks and branches, and, beside the Old Woman, little Dé turning wet sand into mud pies. Farther along the strand: the dilapidated cabin, its chiming shells, the collection of dried starfish on the steps to the porch, its broken railing. From the sky, Mie can see the thatched roof, mould-blackened and perforated again. Fresh tracks plough the earth — a woman’s steps have traced a straight line between the dunes and the cabin. Her mother hides inside, draws maps and trails on the cabin walls, fragments of forests, towns, countries. She conjures creatures and children. Mie would like to linger nearby but the bird does not stop; it soars to the trees crowning the cliffs, lands on top of a beech, and takes flight again — perhaps it will travel as far as Seiche and feast on deep-sea fish snatched from trawlers — then it flies out of reach, disappears.

The sheet is cold against her hard nipples, her belly, and her pubescent mound. Spiked hairs cling to the fabric. In a flash, Mie’s thoughts return to her own body. She is naked. No other creature is in sight. She is alone.

This excerpt is taken from The Body of the Beasts, copyright © 2019 written by Audrée Wilhelmy, translated by Susan Ouriou. Reproduced with permission from House of Anansi Press, Toronto. www.houseofanansi.com.

Audrée Wilhelmy was born in 1985 in Cap Rouge, Quebec and now lives in Montreal. She is the winner of France’s Sade Award, has been a finalist for the Governor-General’s Literary Award, and was shortlisted for the Prix France-Québec and the Quebec Booksellers Award. The Body of the Beasts is her third novel and the first to be translated into English.

Susan Ouriou is considered to be one of Québec’s finest translators of literary fiction. With Christine Morelli, she has previously translated Fanny Britt’s acclaimed novel Hunting Houses for Arachnide.

The Body of the Beasts

Reminiscent of Gaétan Soucy’s The Little Girl Who Was Too Fond of Matches and William Golding’s Lord of the Flies, Audrée Wilhemy’s The Body of Beasts is a startling, gorgeously written novel that tells the story of the Borya family minding a lighthouse and living in isolation. Their lives are altered when young Osip, peering from the lighthouse gallery he has made his home, sees a woman, Noé, arrives in Sitjaq — her dress scant, her skin curiously scarred, and her manners mysterious and wild.

Noé bears a child, Mie, to Sevastien-Benedikt, the eldest son on whose hunter-gathering the Borya family depends. She lives in a cabin on her own and covers the walls with drawings that allude to her mysterious life. The family’s entrenchment in nature is enthrallingly conveyed in young Mie’s sensuous ability to borrow at will the body of mammals, birds, fish, and insects. Her shape-shifting allows her to know the ways of the natural world, though only to a point. When her own awakening body starts to intrigue her, she asks her uncle Osip to "teach me human sex."