Today as part of our Five Things Literary series, we head west and get a behind the scenes look at the literary life of beautiful Victoria, British Columbia.

In her debut collection, Thin Air of the Knowable (Brick Books), poet Wendy Donawa draws on her experience living on the West Coast, as well as the time she spent in the Caribbean. The collection is alive with road-trip poems, vibrant landscapes, and the energy of movement. She's earned praise from fellow BC poets, including Patrick Lane who praised Thin Air of the Knowable as operating "at the very edge of beauty where a wild delicacy resides".

We're pleased to have Wendy take us into the Victoria literary scene, both in the larger sense and in her personal spaces. She tells us about inspiring landscapes, her own special writing spots, and the many incredible festivals and bookstores supported by this small, unique city.

The Gorge now abuts a busy working harbour, a century-old shipyard, a contaminated soil dump; it winds through gritty industrial areas interspersed with population-dense condo developments, in one of which I live. Pervasive clamour of a city making itself—the shipyards’ clang, torrents of gravel poured onto barges, the Gorge’s several bridges choked with traffic streaming in and out of city centre.  Past and present co-exist; urban rhythms and an Indigenous backstory—I never lose that sensation of living over Victoria’s layered and often troubling history, a mood that often migrates into my poetry.

The Gorge has another, natural, life, edged with paths—you can walk or cycle for miles; link onto trails 30 km. north to the ferry, or 40 km. west into old-growth forests. In warm weather I kayak up the Gorge, a placid haven of sky and water, the industrial world almost invisible, almost inaudible.  The shoreline alters with the tide’s ebb and flow; I pass grand old waterfront homes of 19th century business barons, reborn as B & Bs, dental clinics, seniors’ homes. Sudden swathes of greenery widen into a bird sanctuary. Herons startle from under the trestle bridge and fly low over my kayak; kingfishers stitch blue embroidery through the sunlight. Once I passed a seal on a rock, nursing its pup. It’s all poetry compost.

Both the Gorge’s beauty and its historical ghosts haunt me and find their way into my poems.  I kayak past a small midstream island, once a burial ground with carved memorial figures and burial boxes.  With trade and settlement, travelling trunks were sometimes used as coffins. Wooden cracker boxes for the children.

In spring, clouds of cherry blossoms edge my street. Some are descendants of saplings that were a 1938 gift to the city from its Japanese community-- two years later dispossessed and interned as enemy aliens. So the beauty of the blossoms is bittersweet. Sakura.

2. My Balcony, Its Shakkei

My small condo perches at a 7th floor corner site, its narrow balcony is L-shaped. From one arm of the ell I can look down the Gorge; from the other, south across the Salish Sea to the snowcapped Olympic Mountains, west to the indigo humps of the Sooke Hills.

My desk, a five-foot wooden butcherblock on IKEA trestles, is set against the window. It gives me shakkei, borrowed scenery, an illusion of spatial flow linking interior and exterior worlds, linking mountains, sea, spring cherry blossoms; it makes them mine. Hummingbirds visit, and, on a good day, so does another poem. 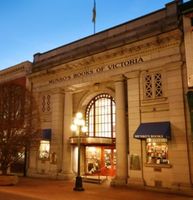 Munro’s Books, co-founded in 1963 by Jim Munro and his then-wife Alice (yes, that Alice), is ranked as 3rd best bookstore in the world by National Geographic. Housed in an impeccably restored 1910 neo-classical bank building, and hung with tapestries by Carole Sabiston (Jim’s second wife), it is surely the temple of bookstores.

An incomparable staff, ‘extended family’ said Jim, when he retired after 50 years, giving the store to four senior employees.

Bolen Books, originally a tiny shop in a mall, is now one of Canada’s largest independent bookstores. Take that, superstore chains! Their strength has always been staff and management who knew what the local community wanted, sponsoring readings, special events, prizes (most recently the Bolen Books Childrens Book Prize). Manager Samantha Bolen, the founder’s daughter, says Victoria bookstores work because “we are one of the most literate cities in Canada… writers who live here are too numerable to count”.

Sadly, both Jim Munro and Meg Bolen passed away recently. Their legacy continues to enrich Victoria: Jim’s, gifted to his employees, and Meg’s, managed by her daughter.

What to say of Russell Books, an Aladdin’s cave of books spread over two floors and two buildings? Up the rickety stairs to a vast Dickensian emporium, used books are stacked in ceiling-high shelves, trestle tables, heaps everywhere, although the staff miraculously knows where everything is. Just say the word and a wiry book-elf will clamber from a ladder and put the required book right in your hand.  Friend of students, the store also buys back used books.

Antiquarian, rare, and out-of-print books are picturesquely housed downstairs where community book launches happen.  Like the other two bookstores, their knowledgeable staff includes emerging and published writers who can speak of all things book.

All three bookstores sponsor readings and launches for local and visiting writers. All are passionate advocates for Canlit, and include prize-winning authors amongst their exceptionally literate employees.  Looking for an out-of–print book you’ve forgotten the name of? These people will find you anything.

It takes a community to raise a poet, as Planet Earth Poetry has been doing for two decades. PEP’s weekly reading series offers both first-timers and seasoned poets a stage and a community of sentient listeners. Featured readers include locals with new books and touring poets on Canada Council gigs who finally reach our damp green coast. The coffee’s great, the wine adequate, and the company stimulating, all of it served with poetry. What better way to spend your Friday evenings?

Libraries, university, poets laureate, art galleries and tea mavens collude! The Malahat Review ends winter with WordsThaw, and nearby book-town Sidney greets spring with its litfest. The local paper’s entertainment section has an Author, Author! column, and popping up like crocus bulbs, a haiku festival is forthcoming. Autumn brings the Victoria Festival of Authors, while the southern Gulf Islands festivalize in all seasons. Virtually every town on Vancouver Island has literary events and festivals--a great excuse for mini road trips.

Wendy Donawa, formerly a museum curator and academic in Barbados, now lives on the West Coast and participates in Victoria’s vibrant poetry scene. Her poems have appeared in anthologies, magazines, and online publications across Canada. She was a finalist in The Malahat Review’s 2013 Open Season Competition, and in 2015 she was runner-up in the inaugural Cedric Literary Awards. She has published three chapbooks, Sliding Towards Equinox (Rubicon Press, 2009), Those Astonishments of Sorrow, of Joy (Leaf Press, 2012) and The Gorge: A Cartography of Sorrows (JackPine Press, 2016). Thin Air of the Knowable is her first collection.

Thin Air of the Knowable

In her first collection, Thin Air of the Knowable, the physical landscapes of Wendy Donawa’s life—West Coast, Caribbean, prairies—ground many of her poems and often reflect the inner geography of her preoccupations. A road-trip poem moves from prairie winter, “an icy scatter of gravel / the moving centre of this unpeopled world,” past a cattle liner on its way to the slaughter house, but it also passes beneath the sky’s “blazing scroll of light,” and magpies “flashing black and teal in the sun.” Landscape also functions metaphorically to suggest how historical settings play out in the exigencies of individual lives.

Other preoccupations include poems that reflect on poesis itself—the strange poem-making compulsion to capture that which is largely inexpressible (hence “the thin air of the knowable”), and the role of dreams, memory, and intuition in shaping a poem’s knowledge.

Donawa is, in many ways, a political poet, yet manages to put flesh and blood into everything she writes. In the end,

Perhaps there is only the demonic journey.
Small beauties by the roadside, and
such love as we can muster.
(from “Pu Ru Paints Zhong Kui the Demon Queller on a Mule”)