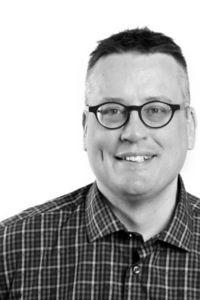 Steve McOrmond's  Reckon (Brick Books) is his first book since the widely-praised The Good News About Armageddon was published in 2010.

Reckon is worth the wait, packed with poems that balance wit and heart, telling stories of longing, defiance, and difference delivered with subtle, wry humour. The collection captures the contemporary world, not shying away from technology and its impact on our emotional and psychological landscapes, as when he writes "The whole world has gone straight to voicemail".

The collection has earned the praise of Kevin Connolly, Ron Sexsmith, and even comedian Patton Oswalt, who tweeted: "Steve McOrmond’s new poem, ‘Pure Outrage,’ is really funny and, if you read it right, kind of scary."

We're thrilled to welcome Steve to Open Book today to tell us about how he first came to poetry as a writer in our Poets in Profile series. He tells us about a gorgeous formative moment one winter day during his childhood in PEI, how his day job has unexpectedly bled into his writing, and his thoughts on the online vs. in-person aspects of the Canadian poetry community.

I had a fairly solitary childhood, growing up in a small farming community in Canada’s smallest province, Prince Edward Island. I was the youngest in the family, and my older brothers and sisters had already moved out of the house so, essentially, I lived as an only child. My parents were older – my father was almost 50 and my mother 45 when I was born. Having raised five children before I arrived (unexpectedly) on scene, they were rather tired of childrearing, as you might expect. I was cared for, but left largely to my own devices.

I had few friends and a lot of unsupervised alone time, but I was never really alone. I read a lot, had imaginary friends and foes, walked in the fields and woods, and had daily encounters with nature. There were cows, horses, skunks, foxes, crows, and barn cats to keep me company. This kind of upbringing gives you inner resources and teaches you how to be alone – solid prerequisites for being a writer. Living among animals is good preparation too: you learn empathy for the other, and that humans aren’t the only game in town.

I remember a winter day in my early teens when school was cancelled due to a blizzard. I was staring out the bedroom window at the neighbour’s house two fields away, its outline coming in and out of view through the blowing snow. I’m framing this as ‘a moment’ but it was really the distillation of a ritual. Anyway, I can vividly recall that black letters began to take shape before my eyes. They were like iron filings that swirled out of nothing and hung, twitching, in the air. They flew, arranging themselves into words, then lines, which stretched out to form a floating bridge across the white fields, which had become a blank page. It was a waking dream. I don’t recall what the words said – it’s possible they were in a dream language I couldn’t read – but I remember thinking, here might be a path out of myself, out of loneliness.

Only one? I have a deep well of envy, but I’ll go with John Ashbery’s long poem “The Skaters.” You can read it, and listen to Ashbery recite it, here, thanks to PennSound.

Intricate, fragmentary, pastoral, it’s a puzzle that the reader has to try to put together on the fly as they skitter and slide across its 739 long lines. But there are pieces missing and it doesn’t all fit together nicely. Completion isn’t the reward. No matter how many times you read it, the poem is always “Like that marvelous thing you haven’t learned yet.” (Ashbery, “The Skaters,” Part IV).

Ashbery called the poem a meditation on the boredom of a lonely childhood, and you do get this sense of a flamboyant imagination engaged in a guerilla war against monotony, trying audacious tactics to outmaneuver the enemy. And because poets can’t help themselves, it’s also a poem about the boredom of poetry itself.

For the past 20 years, I’ve earned my living in high tech. I used to stubbornly try to keep my working and writing lives separate, but I’ll grudgingly admit that work has been an unexpected source of inspiration. For one thing, it’s given me a perspective on how technology shapes our lives, often behind the scenes in subtle ways we aren’t always conscious of. It’s an invisible infrastructure. Working in offices has also led to a fascination with how individuals organize themselves into teams, groups, lunch cliques. This has informed some of the thinking in my poems about conformity, consumer culture, and a kind of new tribalism I fear we are backsliding into.

Sadly, I hold on to them forever. I can’t let them go. I revisit them too often, thinking they can be resurrected, reborn, but this rarely happens.

The Darkening Trapeze by the late Larry Levis. His last elegies are a revelation.

I’m being facetious, of course, but if someone were to view the poetry community in Canada through the toy camera lens of social media, they’d be forgiven for concluding that it is more fractured and divisive than ever. It’s strange, though, because this doesn’t gel with the community I see coming out to poetry readings and literary events. In these venues, people tend to be warm, supportive, open, and attentive. There’s usually a lot of good will in the room that I wish we’d see more often in our online discourse.

Steve McOrmond is the author of three previous collections of poetry, most recently The Good News about Armageddon (Brick Books 2010), which appeared on a number of book critics’ Best of 2010 lists and was shortlisted for the 2011 ReLit Award. His second collection, Primer on the Hereafter (Wolsak and Wynn 2006), was awarded the Atlantic Poetry Prize. His debut collection, Lean Days(Wolsak and Wynn 2004), was shortlisted for the Gerald Lampert Award. Originally from Prince Edward Island, he lives in Toronto. Reckon is his fourth poetry collection.

Reckon, Steve McOrmond’s first book of poems since his acclaimed 2010 collection The Good News about Armageddon, hones in on those fugitive moments when the parts of ourselves that have not been entirely subsumed by consumer capitalism escape their cages and come out to play—a photographer’s lifelong desire to collect snowflakes, an adolescent’s game of show-me-yours, the small, defiant act of letting a cellphone call go to voicemail. “The whole world has gone straight to voicemail,” McOrmond writes a line later.

With one foot in the physical world and one in the virtual, these poems embody the often-tense negotiations between “I” and a collective “we.” Concerned with the sweep of history and the rush of the now, McOrmond demonstrates a knack for bringing the vast and amorphous down to human size, making it personal: “How gone?/ Real gone. All our gift cards unredeemed.”

Responding to a poem from Reckon that appeared on Poetry Daily, comedian Patton Oswalt tweeted a perceptive one-liner review: “Steve McOrmond’s new poem, ‘Pure Outrage,’ is really funny and, if you read it right, kind of scary.” While at times these poems reach out from a place of isolation, across a distance greater than words, one always senses an earnest desire for connection and engagement: Here, take my hand. Maybe it’s not too late.