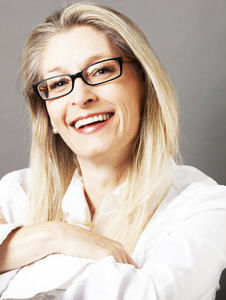 Plenty of writers, emerging and established, have questions about how to handle the professional aspects of the writing life. How to approach social media? Are festivals important? What about reviews? How do I balance my day job with my writing?

It can all be pretty daunting, and it rarely looks like the lives of writers in movies and television. Enter Lisa de Nikolits, author of eight novels (including, most recently, Rotten Peaches, from Inanna Publications), who is trying to demystify the ins and outs of the writing life (and entertain us along the way). Her project, Writer for a Year, is a series of videos, available free on YouTube, that offer a year-long glimpse into the life of a writer today in Canada.

From editing to grant applications, translation to travel, it's witty, helpful, and honest insight from a writer who's been doing it for more than a decade. With more than 40 videos so far since her January start, the series has become a significant resource for writers looking for advice or viewers simply interested in the reality of an author's experiences.

We spoke to Lisa about Writer for a Year, including why she wanted to share her experiences and what she's learned. She told us about the pros and cons of digital promotion, the misconceptions she hopes to clear up through the videos, and an aspiring writer who might change his mind about her advice.

What prompted you to start this project? Who do you see this being for first and foremost?

WFAY was the culmination of various suggestions. A friend of mine commented that I’d be great for live feeds on Facebook but the idea filled me with horror! I’m up for mild spontaneity but live is a whole different ballgame! WFAY is editable which allows for some control. I say some, because video is a an odd beast and at times I’m horrified by the angles and how I look and sound but I made a commitment to the project and so I carry on!

I’m often asked by other authors how to ‘do social media’ and one hardly knows where to start! So that factored in because I thought the posts could be a resource of sorts. I wanted the topics to cover all manner of digital and real life events. On the one hand, the digital world is a sea of opportunity and on the other, it’s a black hole. I’m always careful to point out that just because a thing didn’t work for me, doesn’t mean it won’t work for someone else.

I got upfront approval from my Inanna Editor-in-chief, Luciana Ricciutelli, and our publicist, Renée Knapp. I’m always aware that I represent Inanna and I wanted to make sure that the project didn’t devalue or cheapen the Inanna brand. The idea was very well received! Renée called it ‘fiercely feminist’ and Inanna’s support for the project is amazing!

I also chatted to two very dear young friends of mine who were immediately supportive of the idea. They gave me a lot of helpful practical tips and sent me all kinds of links to similar projects. (Thank you, Samia and Colin!)

I’ve always been a diarist, a documenter of my life, in one way or another. And when I sat down and filled out my calendar for 2019, I was overwhelmed by the amount of events and activities lined up, not to mention all the behind-the-scenes promotional work and the writing! I couldn’t think of a better way to track the year – and it’s important to me to track things! This year does have more events going on than usual, which added to the impetus for the project. For example, there was the Italian trip for the launch of Una furia dell’altro mondo by Le Assassine in Milan (and I thank the Canada Council for the Arts for the travel grant, or I would never have been able to go) and there’s the upcoming NYC trip to ThrillerFest for which I am tremendously excited!

Were you daunted by the scale of WFAY when you started? How has the time commitment been for you?

Yes, it’s more stressful and time consuming than I had imagined! But it does depend on the video. I use iMovie which is a very simple program to use. I keep meaning to try Adobe Premier Pro for a more polished look but I haven’t found the time to learn a new program. A post constructed from a bunch of videos takes longer to produce than a single narrative. I upgraded my phone as my little one couldn’t handle the work load and I’m learning new technical tricks too.

In terms of an itinerary, I planned to follow the calendar of events and chat about things that came up in between. At times, when there are a few consecutive events that follow one other very quickly, I worry that people will wish I’d just shut up! Social media is such a tricky beast and I’d hate to b seen as the the equivalent of billboard advertising spamming a landscape.

One of the things WFAY does is clear up misconceptions. What are some of the most common misconceptions about the writing life, do you think?

I wanted to show what an ongoing juggling act it all is and that a writer’s life isn’t dreamy or neatly segmented in the way one might imagine. There’s a concept of a writer poring away in a hallowed space, engrossed and undisturbed by the real world, only to emerge graciously before a large crowd and engage them with witty banter, humour and wisdom... well, it’s not like that!

A writer’s life is a grind, calling for ongoing commitment and focus and it’s 24/7. I know the vlogs are more Blair Witch Project than TED Talks and that’s kind of the point, to show a foot soldier’s perspective. I wanted to dispel the romanticized image of the solitary, angst-filled writer, nudged by a near-empty bottle of scotch and an overflowing ashtray. In reality, it’s more mundane and the hardships aren’t infused with Bukowski-cool. At times reality is readings where people don’t show up or promotional ideas that fall flat but you make the best of things and forge on. Endurance! I wanted to show the necessary endurance that it takes, to be a writer!

And there are a lot of debut authors (of all ages) who believe they can make a living as novelists. A twenty-something young man was recently annoyed with me when I commented that his dreams of giving up law school to live off writing fiction weren’t sound. I said he needed a day job to support his writing habit. Yes, we are like addicts, fiction is our fix and what we must, to support our habits. The young man looked at me scornfully as if to say “well, you may have failed but I won’t!” I thought WFAY could help illustrate the reality of the financial side too.

One of the main reasons I made the decision to live in Canada, was the writing community. It’s vast! I wanted to illustrate that too – the breadth of events and books and resources out there. I hoped to show what a great community it is, and how we connect and support each other.

Why was video the right way to deliver this content?

Over the years, I’ve tried to unofficially document a writer’s life (or my reflection of it!) via blog posts or photo albums on Facebook and posts on Twitter and Instagram. Back in the day, I used to post albums of events but then albums faded into obscurity.

Trendsetters are hailing video as the current hot thing but there are always people making proclamations like that and next thing you know, that fabulous hot idea du jour has faded away without so much as a whimper. So the fact that video and YouTube are being hailed as fabulous promotional outlets didn’t factor into it. It’s more that there’s so much content that I wanted to include and video is a great way to get a lot of information into a short span of time.

The series wasn’t intended to be self-promoting at all but rather, to show the camaraderie and hardships as well as showcase other writers and their individual work and struggles and triumphs.

There’s a wealth of authors out there who work so hard and I love to showcase their work when I can. I have a review site, the Minerva Reader, which features ‘unsung treasures you might have missed’ (that’s the tagline)  and I’m hoping to expand that project next year, get more organized and post reviews more regularly, with links to the authors’ books.  It features all Canadian content, as does WFAY.

What has the most surprising aspect of WFAY been for you so far?

I haven’t been surprised by anything as such but I worry that it looks self-aggrandizing and that I’m annoying people. But, as with writing a book or putting any creative endeavour out there, there’s always a level of fear. I wanted to show that too and I’m not sure that I’ve succeeded. I wanted to show that there’s significant and necessary courage for any artist putting their work out onto a public forum.

What will happen at the end of the year? Will you celebrate sticking with the project for such a long time?

I haven’t really thought about it! I guess it would deserve a celebration of some kind! Suggestions have been made that I use the posts as prompts for a How-To book or create a series of video tutorials, redo the topics in a studio environment with professional lighting, scripted episodes and helpful links. But I don’t think that interests me. The funny thing is, although I did this as a way to document the year, I might not review it at all! I might simply move on to the next thing which I hope will be the expansion of The Minerva Reader in some form.

Thank you very much for having me as a guest writer today, it truly is an honour. I love Open Book and I’m not alone in saying that we writers are truly grateful for all the work you do.

Originally from South Africa, Lisa de Nikolits has lived in Canada since 2000. She has a Bachelor of Arts in English Literature and Philosophy and has lived in the U.S.A., Australia and Britain. No Fury Like That, her most recently published work, is her seventh novel. It will be published in Italian, under the title Una furia dell'altro mondo, in 2019. Previous works include: The Hungry Mirror (winner 2011 IPPY Gold Medal); West of Wawa (winner 2012 IPPY Silver Medal); A Glittering Chaos (winner 2016 Bronze IPPY Medal ; The Witchdoctor’s Bones; Between The Cracks She Fell (winner 2016 for Contemporary Fiction); and The Nearly Girl. Lisa lives and writes in Toronto. Her ninth novel, The Occult Persuasion and the Anarchist's Solution is forthcoming in 2019.