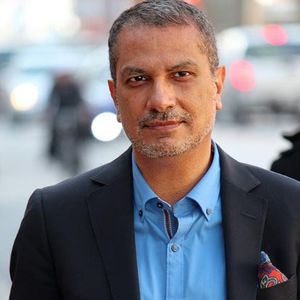 Yesterday at the iconic Fairmont Chateau Laurier in Ottawa, a crowded room full of politicians, authors, journalists, donors, and book lovers waited to see who would be the 2017 winner of the $25,000 Writers' Trust Shaughnessy Cohen Award for Political Writing. The award presentation was part of the Writers' Trust of Canada's annual fundraiser, Politics & the Pen, one of the most anticipated nights in the Ottawa social calendar.

When the announcement came that Ryerson professor and Toronto Book Award winner Kamal Al-Solaylee's Brown: What Being Brown in the World Today Means (to Everyone) (HarperCollins Canada) had captured the prize, the whole room joined in a standing ovation. Al-Solaylee, who seemed modestly surprised at the win, spoke briefly but passionately, calling for tolerance and nuance in our increasingly troubled and divisive times, themes which are explored in Brown.

The jury was composed of CBC foreign correspondent Nahlah Ayed, National Post columnist Colby Cosh, and former Member of Parliament Megan Leslie selected the winner. Their citation read:   Not black, not white, but brown: how do skin colour and its shades play out in our relationships, our economy, and our politics? Kamal Al-Solaylee’s book dares to propose and define an emerging racial category, drawing on a lifetime’s travel and inquiry to discuss the common experience and the awkward status of the Latin, Asian, and Mediterranean peoples of the fast-rising global south. Thoughtful and refreshing, Brown has a chance to become a made-in-Canada intellectual landmark. Al-Solaylee is no stranger to awards, having won the Toronto Book Award and been nominated for the Hilary Weston Prize for Nonfiction for his first book, the best-selling memoir Intolerable: A Memoir of Extremes (HarperCollins Canada), which was also featured on CBC Canada Reads. In addition, Brown was nominated for the Trillium Book Award just three days ago. Each of the remaining finalists was awarded $2,500 in recognition of the excellence of their works. They were: Christie Blatchford for Life Sentence: Stories from Four Decades of Court Reporting – Or, How I Fell Out of Love with the Canadian Justice System (Especially Judges), published by Doubleday Canada; Ian McKay and Jamie Swift for The Vimy Trap: Or, How We Learned to Stop Worrying and Love the Great War, published by Between the Lines; James McLeod for Turmoil, as Usual: Politics in Newfoundland and Labrador and the Road to the 2015 Election, published by Creative Publishers; and Noah Richler for The Candidate: Fear and Loathing on the Campaign Trail, published by Doubleday Canada.Open Book congratulates Kamal Al-Solaylee for his well-deserved win, and all the nominees for their accomplished, relevant, and important books.The Shaughnessy Cohen Prize honours the late MP for whom it was named, and is sponsored by Aimia Inc. administered by the Writers' Trust of Canada. For more information about the Writers' Trust, please visit their website.