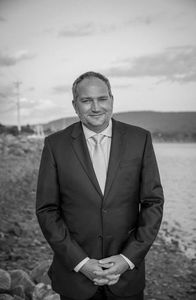 Darryl Whetter's Search Box Bed (Palimpsest Press) brings together poetry, with all its historical associations of love and romance, and new media, with its accompanying online realities of sexual connection and pornography.

Examining how love, sex, and media have evolved together, and how our online identities effect our sexual ones, Whetter's collection is insightful, timely, and unapologetically alluring.

We're pleased to welcome Darryl to Open Book today to talk about Search Box Bed as part of our On Writing interview series, where we dig into a writer's newest book, what it is saying, and how it came to be.

He tells us about why poetry is the most sexual genre, why he wanted to examine the effect of our online, curated identities on relationships, and the ocean that deserves a co-writing credit on Search Box Bed.

What fascinates you about the poetic potential contained in exploring contemporary experiences of love and sex?

Poetry is the most sexual of literary genres: it’s musical; it has a relationship to breath; it’s fluid and can disperse its attention more unevenly. We chew poetry. It slides into our ears. Human sexuality involves so much thought and fantasy—in addition to all the body work—but the verbal thoughts and expressions are so sparking, so mutable. We don’t kiss in prose.

Search Box Bed also explores the curated and edited self of online identities. These self-portraits we make (and tweak and propagandize), their fusion of image, phrase, video, link—that’s more like poetry than any other genre.

There's a technological aspect to the themes you're writing about (as captured in your title). Do you see technology featuring in other contemporary poetry, or do you find it underrepresented?

You can find tech in other poetry if you look hard enough, but I wrote Search Box Bed in part because I didn’t see enough mapping of these massive shifts to networked identity and the hive mind. So much of our lives are now connected, and humans are of course the most sexual of mammals. The big portrait here isn’t just of sex, but of that triangulated relationship between a media technology (from film to radio to the Web), the society/individuals using it and the society/individuals portrayed in/by it. I’m not a ‘what-I-did-today’ poet. We’ve lived through (or have now been born into) quite arguably the greatest social evolution ever; I wanted to capture that connectivity (or lack thereof), and poetry is an ideal vehicle.

You explore the relationship between love, sex, language, and pornography in these poems at times. As a multi-genre writer, why was poetry the ideal venue in which to explore these connections?

Poetry—real poetry—is the most teleportational of genres. We jump around through ideas. Many of us think in words, but we don’t always think in prose. The language of intense thought and intense emotion—the language of love—is usually translated when it’s put into big blocks of prose. Poetry can teleport between multiple characters or multiple consciousnesses; a line or phrase can be for one character, multiple characters or even travel, submarine like, beneath the very idea of character. If you’re writing a story (for page, stage or screen), you’re almost always writing characters. Poetry is free of that obligation to work in a singular, fixed consciousness. Also, metaphor is one of the most visual tools available to the writer. We needn’t say any more about sex and looking. Search Box Bed is a slideshow, a film reel, a film festival.

The Atlantic Ocean practically deserves a co-writing credit. I lived in three different places in Nova Scotia while writing, rewriting and editing these poems. Between a house and a cottage, I was able to write almost all of these poems overlooking the ocean. I fell in love partway through the book, and for 9 months that repeatedly took me to Louisiana (where my partner was finishing her doctorate). Some of the love poems have a trace of that stretching and gathering.

I write in the mornings, having shut off my modem the night before. Ideally I like to write before I’ve even said a word aloud. I write in silence, initially by hand, with too much coffee. A later editorial phase sees me recording each poem and rewriting during playback.

You've lived abroad and taught at multiple schools and universities. How has the breadth of your personal experiences informed the poems in this collection, and their viewpoint?

As a writer, I am part hypothesist and part documentarian in addition to whatever unknown and half-known personal compulsions drive me. If we write personally, if we turn the investigations internal rather than external, I think we do that in part to make sense of our lives, to chart and test our viewpoint(s). My five books can answer this question better than I can.

One of the great joys of moving past your first book is to work on different projects in different stages. I’ve got the dead-writing-prof novel and, maybe, a book of creative non-fiction that is part remembrance, part confession. Most importantly, though, I’m finishing a tar-sands novel. I completed this interview in a Fort McMurray hotel room because two days ago I flew in a helicopter above the sands (not just our Mordor, but our subsidized Mordor). American literature addresses slavery; German literature reckons with the Holocaust. Where, in landscape-obsessed CanLit, is our tar-sands novel?

Darryl Whetter is a novelist, short-story writer, poet, critic and professor. His debut collection of stories, A Sharp Tooth in the Fur, was a Globe and Mail Top 100 Book. His debut book of poems, Origins, received a starred review from Quill & Quire. His novels include the bicycle odyssey The Push & the Pull and the multi-generational pot-smuggling epic Keeping Things Whole. A former CBC Radio books panellist, he reviews for The Globe and Mail, The Toronto Star,  The National Post, etc. He has taught creative writing and literature at four different Canadian universities. Currently, he is a visiting professor in Singapore, where he is the inaugural director of the first creative writing master’s program in Southeast Asia.

There is no history of poetry without love poetry, and there is no history of media without pornography. Darryl Whetter turns his attention from evolution in the natural world to the co-evolution of love, sex and media. Urging readers to “fill the tiny / unmade bed of the search box,” these alluring poems build on radically changing communication technologies to explore a new sexuality that does (and does not) dare to tweet its name. Here, finally, is the language of digital love.