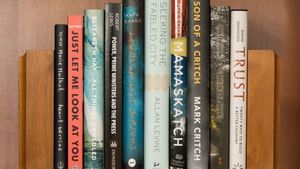 They jury selected the hefty 10-title list from over 100 submissions, praising the chosen books as "breath-taking in their range of topics... There is remarkable achievement here and we hope readers will celebrate that with us."

The shortlist will be announced on January 9, 2019, and the winner at a gala luncheon on March 4. Stay tuned for non-fiction news in the New Year!