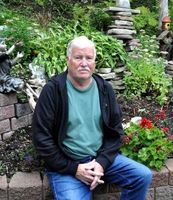 Newfoundland artist Elijah Lloyd Pretty is a well-known realist painter whose work captures the daily life, character, and history of the province. Now, for the first time, over 60 of his works have been collected in print, with discussions of how the pieces were inspired and came to be from the artist himself.

My Visual Self Revealed: Original Paintings and Stories from Newfoundland (Crossfield Publishing) draws on years of notes that Pretty kept for his own records, never suspecting they would one day turn into a book. Soaked in the history of Newfoundland's small communities, radiating warmth, grit, and the province's iconic landscapes, the paintings and the stories that accompany them are moving and deeply felt.

We're excited to present an excerpt from My Visual Self featuring two paintings and Pretty's moving and personal write-ups about what inspired them.

Excerpt from My Visual Self Revealed: Original Paintings and Stories from Newfoundland by Elijah Lloyd Pretty 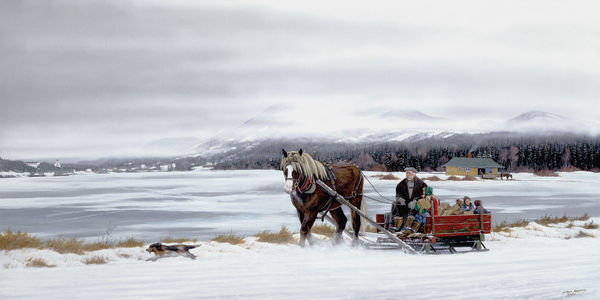 My cousin Charlie once told me a story about his father, Leo, and his Aunt Sarah. At age nineteen, Leo was doing odd jobs on the road in and around Chapel Arm, which included bringing freight and mail in from the railway station in Long Harbour Crossing. As for fourteen-year-old Sarah, she was quite ill at the time and her family wondered how much time they would have with her.

One day, Sarah saw a doll in the Eaton’s catalogue that she wanted very much. But Christmas was months away and Sarah’s birthday wouldn’t be for another eight months. Her mother ordered the doll anyway and decided to wait until Christmas to give it to her.

On a cold mid-November morning, Leo tacked up the horse for his usual six kilometre trip to Long Harbour Station. Thinking that Sarah would enjoy the ride and benefit from some fresh air, he invited his sister along. Despite the fact that there were a lot of packages at the depot that day, Sarah gravitated to one in particular. Even though she had no idea what was inside, she held on to the mysterious bundle for the entire return trip.

When she got back home, her mother told her that it was just some yarn from Prince Edward Island. With a sigh, she put the parcel down and went to rest on the sofa. Her mother took the package and put it in the attic, waiting for the right time to give it to her. Unfortunately, that occasion had to be accelerated. Over the next few weeks, Leo noticed that his sister was fading fast so he asked their mother to give Sarah the doll early. She agreed, and that evening the precious gift was wrapped up in some beautiful paper and given to the girl. Sarah was overjoyed and her radiant smile warmed the entire house with happiness.

Unfortunately, just as Leo had predicted, she soon took a turn for the worse and passed away peacefully with her little doll clutched close to her side. Package for Sarah was my attempt to visualize this sad but compelling story, relayed to me a very long time ago by my cousin. Since completing the painting I’ve learned that it was actually my dad’s sister, Ida, who passed away in 1920. Shown in the painting is my Uncle Leo, Ida, his son Charlie and a friend. I added the little dog because I always remember one running around in front of Uncle Leo’s house. Sadly, my cousin Charlie also passed away a few years back. Right now, I’d give anything to hear him tell this wonderful story again just one more time. 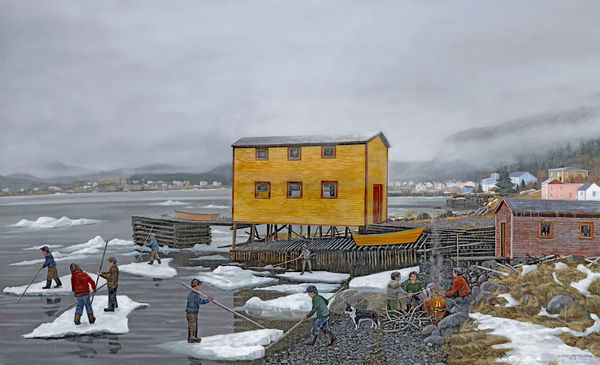 While on the east coast a few years back I took a trip out to Fox Harbour. Even with the late spring fog surrounding the hills and cove I could see that the place was absolutely beautiful. Like so many other communities in Newfoundland and Labrador, it looked like a wonderful place to raise a family. As I drove around the harbour I came across some young folks who were “copying the pans”, a great past time we all did when we were kids.

An old man once told me that copying the pans was an informal training exercise for young men who would eventually “go to the ice” to hunt seals as adults. For me and most of my friends, jumping from ice pan to ice pan or “rafting” along the shallows were just fun things to do.

As I watched those plucky boys and girls nimbly test their luck on the ice pans that morning it brought back a lot of memories. Someone had wisely lit a fire on the beach and one young feller had his socks drying on a stick; a clear indication that he’d received a mild dunking.

I remember one time when we were all on the ocean side of the beach, copying the thick and heavy pans that had drifted in from the ocean and were now lining the shore. Three or four of us managed to manoeuvre one particularly large pan along the shore with our “lungers”, which were twelve-foot-long fence railings. Along the shore, the cove in Chapel Arm is actually quite shallow but three or four hundred yards out it suddenly drops off into very deep water.

Looking back on it now, this sort of thing was akin to extreme sports or some real-life video game. Especially when all of us would move to one side of the pan, nearly tip it over and then run back to the centre when it started to get flooded with water. Each time we did it, we’d press our luck a little bit more, laughing and shouting all the while.

Elijah Lloyd Pretty was born in Chapel Arm, Newfoundland to a large family. His father, Clarence, worked at a distant lumber camp and wasn’t always home, so the task of providing guidance and teaching often fell to his mother, Lucy. His art career took flight when a gallery offered him a small show in Montreal and then in Halifax. With every solo show selling out, he quickly became a sought-after realist.

In addition to teaching art classes independently and at the College of the North Atlantic, his work has sold all over the world, appearing in private and corporate collections. He is currently living in Stephenville, Newfoundland where he continues to paint on a daily basis and produce a small number of limited edition prints.

My Visual Self Revealed: Original Paintings and stories from Newfoundland

This book is compilation of original artworks and stories that reveal the artist, the era, and the place where he discovered his own distinctive artist’s style as a youngster, and then honed his talents into a mature portrayer of daily life in Newfoundland, Canada. His oil paintings are widely sought after, and can be seen in many galleries and private homes across Canada. This book commemorates both the art and the artist in stunning reality and lyrical revelations of past times.