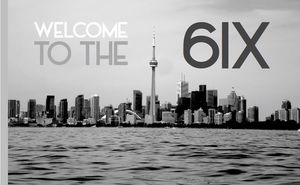 The City of Toronto's Cultural Hotspot, under the Arts Services unit, has launched a new signature project that offers a chance for people across the city to tell their stories.

My City My Six asks Torontonians of any age to submit their own personal six-word story of the city. If the idea sounds familiar, you may remember about ten years ago when Smith Magazine popularized the idea of the six word story, publishing several volumes of their best-selling 6 Word Memoir series. They in turn were borrowing the idea from Ernest Hemingway, who is famously said to have created the micro-story "For sale: baby shoes, never worn" in response to a challenge to write something poignant in a six word limit.

While a similar project proved popular and successful in Minneapolis, it was spear-headed by poet, artist, and librarian Emily Lloyd, rather than organized by the city, meaning Toronto's project will be the first six word story initiative of this size and scale. And in Toronto, of course, the "six" of the word limit also riffs on the city's recently-adopted nickname, making it all the more appropriate.

Toronto Poet Laureate Anne Michaels will sit on a jury which will chose an as-yet undecided number of the stories to be featured in a public exhibit in Fall 2017. Billboards, transit shelters, cultural spaces, and other public spaces, as well as local exhibits, will feature the selected submissions. Michaels got things started, submitting her own story:

"We belong where love finds us"

Open Book spoke with Nadira Pattison, Manager of Arts Services, who told us that the project is already enjoying an enthusiastic response.

A big focus of the project is its accessible nature. Pattison hopes for participation from across the city, and from all ages, "from four to 104… It's all about community," she said. "We wanted something that was accessible to everyone, with no barriers to participation."

It's also a chance for budding writers to test their talent and their brevity. Community arts organizations across the city are offering workshops to encourage and guide people looking to write their own six word stories, utilizing different mediums (including, for instance, chalking) to encourage participation and access.

"People are taking the opportunity to stake their claim in the city," said Pattison. "It causes you to think, it causes you to reflect: What is my relationship to this city?" She shared her own six word story with Open Book: "Born elsewhere, moved here, forever grateful," which alludes to her experience when her family moved from Guyana when Pattison was six, moving to Canada when she was 13.

The unifying aspect of the project is an important component. "When we start to put [the submissions] together and put them in public exhibit and share them, then we stop being a city of strangers… [and become] a city of people who can really emphasize with each other and with each other's stories; you realize how much we all have in common," Pattison said, but she also pointed out that the stories need not be serious in tone, and that having some fun is part of the idea. "It can be a moment in time; it doesn't have to be your life story, it can be what defines you now."

Pattison also shared a couple of her favourite submissions so far, which included:

"Please sit and read to me" - Geraldine, 96, Sunnybrook

"How she hustles for her passion" - Harleen, 30, the Annex

Asked why this was the right time for a project like this, Pattison said, "I can't think of a better time for people to know and understand that we are more alike than we are different." Referencing the French Canadian writer Gabrielle Roy's quote "How would we ever know each other if it were not for the arts?" Pattison noted, "I think what makes it special is that it's not [the City's] project, it's what everyone will bring to it that will create it…We couldn't think of a better way to celebrate Canada 150 than celebrating the citizens of the city."

If you're looking to submit your own six word story, you can do so any time before May 2017, either by sending your submission to culturalhotspot@toronto.ca or through local arts service organizations. Be sure to include your first name, the name of your neighbourhood, and your age with any stories submitted.

On September 27, there will be a launch event for the My City My Six public exhibition at City Hall. Details of this event will be confirmed in the coming months, so stay tuned to Open Book for more news about My City My Six.