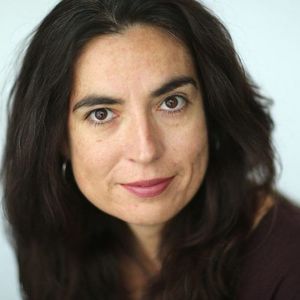 Today at a luncheon in Toronto's Omni King Edward Hotel, Tanya Talaga was awarded the $25,000 2018 RBC Taylor Prize for Non-Fiction for her book, Seven Fallen Feathers: Racism, Death, and Hard Truths in a Northern City (House of Anansi).

In her acceptance speech, after a standing ovation from the entire room, Talaga was visibly moved as she spoke about the seven Indigenous youths who died in Thunder Bay - the titular 'feathers' of Seven Fallen Feathers.

"I wish I didn't have to write this book," she said. "But I had seven reasons that I had to do so." She then recited the names of the seven late youths: Jordan Wabasse, Kyle Morrisseau, Curran Strang, Robyn Harper, Paul Panacheese, Reggie Bushie, and Jethro Anderson.

Talaga thanked her mother, who was in attendance, saying "My mother is my hero... I wouldn't be here if it wasn't for your support."

She also had warm words for her publisher, House of Anansi, represented at the event by several staff and board members, including Publisher Sarah McLachlan and Chairman Scott Griffin. "House of Anansi has been a home for me... you are so supportive of female writers." Talaga also recounted the positive relationship and experience she had with acclaimed Anansi editor Janie Yoon.

Earlier in the luncheon, while speaking as a finalist before the prize was announced, Talaga made reference to the recent, disappointing verdicts in the deaths of Colton Boushie and Tina Fontaine. "[My book] is a book about love, but it's also a book about loss and our failures as a country." Later, as she accepted the award, she spoke of the powerful writing being done by Indigenous authors in Canada. "We're a voice from the north and we're going to keep going, because we have a lot to say."

This year was also notable as the first year the RBC Taylor Prize has launched a new initiative (together with the RBC Foundation): the RBC Taylor Prize Emerging Writers Mentorship Program. Talaga chose to mentor Stephanie Harrison, a Victoria based non-fiction writer whose work in progress deals with the fallout on the family of a man accused of a violent crime.

Prize founder Noreen Taylor spoke warmly of the mentorship program, which has been a work in progress for some time, calling it her late husband, Charles', "fondest wish and first idea".

In late March Talaga will announce the 2018 winner of the RBC Taylor Emerging Author award, who will receive $10,000 and the opportunity to be mentored under by Talaga.

Congratulations to Tanya Talaga and House of Anansi!

More than a quarter of a century later, from 2000 to 2011, seven Indigenous high school students died in Thunder Bay, Ontario. The seven were hundreds of miles away from their families, forced to leave home and live in a foreign and unwelcoming city. Five were found dead in the rivers surrounding Lake Superior, below a sacred Indigenous site. Jordan Wabasse, a gentle boy and star hockey player, disappeared into the minus twenty degrees Celsius night. The body of celebrated artist Norval Morrisseau’s grandson, Kyle, was pulled from a river, as was Curran Strang’s. Robyn Harper died in her boarding-house hallway and Paul Panacheese inexplicably collapsed on his kitchen floor. Reggie Bushie’s death finally prompted an inquest, seven years after the discovery of Jethro Anderson, the first boy whose body was found in the water.

Using a sweeping narrative focusing on the lives of the students, award-winning investigative journalist Tanya Talaga delves into the history of this small northern city that has come to manifest Canada’s long struggle with human rights violations against Indigenous communities.

A portion of each sale of Seven Fallen Feathers will go to the Dennis Franklin Cromarty Memorial Fund, set up in 1994 to financially assist Nishnawbe Aski Nation students’ studies in Thunder Bay and at post-secondary institutions.