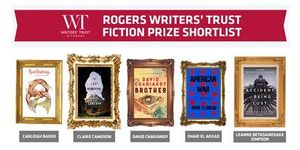 Part of the three crown jewels of Canadian fiction prizes, along with the Giller Prize and Governor General's Literary Award, the Rogers Writers' Trust Fiction Prize is one of the most prestigious awards for a prose writer in Canada.

The award boasts past winners like André Alexis, Miriam Toews, Emma Donoghue, Lawrence Hill, Alice Munro, and Austin Clarke. Indeed, the Rogers has had a knack for picking books that not only go on to be classics, but are written by authors who are amongst the most beloved in the country.

Today the Writers' Trust released the five-book shortlist for the 2017 prize, with one author poised to take home the award, increased this year from $25,000 to a whopping $50,000, on November 14 at the Trust's prize ceremony in Toronto.

It's a good year for Penguin Random House Canada, who snagged three of the five nominations for their imprints, while the remaining two went to independent houses Anvil Press and House of Anansi Press. The shortlist features just one overlap with the Giller longlist in David Chariandy's Brother.

The finalists were selected by a jury composed of writers Michael Christie, Christy Ann Conlin, and Tracey Lindberg. They read 141 books submitted by 67 publishers.

Congratulations to all the shortlisted authors and their publishers. Stay tuned to Open Book for most literary prize season news, as well as the announcement of the Rogers Prize winner.