That Tiny Life, the title story of my collection, is about family—about distance that grows between families over time. I can tell you that now because the story is written. Writing it, I didn’t know what the narrative circled, and I struggled through many versions while I was figuring that out.

By versions I mean overhauls: one early draft had too much violence, another too much cynicism, and so on. And like all projects, there came a point in writing the story where I loathed it.

When students come to me with this problem I have them highlight sections or ideas they still like, and then articulate why they hate the rest of it. But students are usually working to an imposed deadline, and most story writers answer only to themselves.

For me, this is where music comes in handy: I treat writing like practicing, like I mentioned a few weeks back. If I’m stuck I read, write exercises, or try a variation in form. (I wrote about these earlier, too.) But if the project still isn’t behaving, I shelve it and work on something else. How long it’s in the doghouse varies—a week, month, year… Writing is a slow beast, but it will get to where it’s going.

Living in Victoria BC, I often take the ferries to the mainland. Victoria to Vancouver is a beautiful trip: the sky and ocean and islands are all varying shades of blue, and it’s not unusual to spot a pod of orca. The ferries work their way through the Gulf Islands before the open stretch of ocean, and all that winding there’s a place (Active Pass) where the ferries cross paths. If the day’s sunny passengers stand outside, the ferry horns sound, and people wave to each other ferry to ferry. You’re headed one way, they’re headed to where you came from.

That Tiny Life takes place in the near future on Earth, and on deep solar ferries en route to mining operations on Titan, one of Saturn’s moons. But it was during one of my trips when I had the story shelved that I realized that was what my story was about—lives crossing and pulling apart.

I finished the story, and you can find that moment written into it. 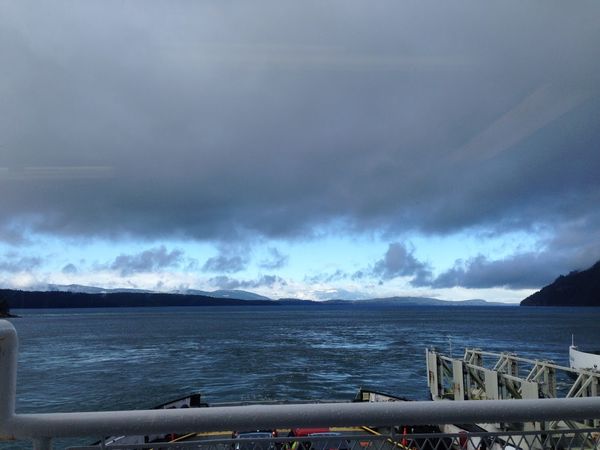 Erin Frances Fisher (MFA UVic, AVCM pedagogy/performance) is a writer and musician in Victoria, BC. Her short story collection THAT TINY LIFE was published by House of Anansi Press, March 2018, was a finalist for the Ethel Wilson Fiction Prize at the 2019 BC Book Prizes, and runner-up for the 2018 Danuta Gleed Literary Award. Her stories have appeared in Granta, The Malahat Review, PRISM international, Riddle Fence, and Little Fiction. She is the 2014 RBC Writer’s Trust Bronwen Wallace Emerging Writers recipient. Erin teaches piano at the Victoria Conservatory of Music, and is a sometimes sessional writing instructor at the University of Victoria.

In settings that range from the old American West to pre-revolutionary France, from a present-day dig site in the high tablelands of South America to deep space, That Tiny Life is a wide-ranging and utterly original collection of short fiction and a novella that examines the idea of progress — humanity’s never-ending cycle of creation and destruction.

In the award-winning story, “Valley Floor,” a surgeon performs an amputation in the open desert in the American West. In “Da Capo al Fine,” set in eighteenth-century France, the creator of the fortepiano designs another, more brutal instrument. And in “That Tiny Life,” the reader gets a glimpse into a future in which human resource extraction goes far beyond Earth. Each story is infused with impeccably researched detail that brings obscure and fascinating subject matter into bright relief, be it falconry, ancient funeral rites, or space exploration. The result is an amazing interplay of minute detail against the backdrop of huge themes, such as human expression and impact, our need for connection, the innate violence in nature, and the god-complex present in all acts of human creation.

A highly accomplished, evocative, and wholly impressive work of short fiction, That Tiny Life introduces readers to a writer with limitless range and imagination.