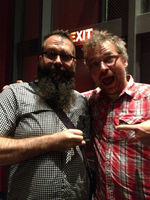 Matthew Daley is a freelance illustrator based out of Toronto. A regular contributor to magazines such as Broken Pencil and Taddle Creek, he has also designed posters for Devo and the 2013 Polaris Awards. Cory McCallum is a writer from Orangeville, Ontario. Prior to 2012, McCallum did all of his work in music, but then he collaborated with Daley on the Mr. Monitor web-comic, The Pig Sleep, which won the Gene Day Award at the 2013 Joe Shuster Awards. Their new collaboration, debuting at TCAF, is Errol Dynamic, the tale of a not-so-great space adventurer. You can keep track of them at plierpants.com.

Please describe, as best you can, your new comic book as an equation of movies. (e.g. Passenger 57 + Fried Green Tomatoes – unintentional cannibalism)

MATT: Eternal Sunshine of the Spotless Mind + The American Astronaut + 2001: A Space Odyssey - primitive humans + Pink Flamingos (since I based the design of Errol's wife on Babs Johnson)

MATT: It's a toss up between The Dark Knight Returns or Marshal Law, even though I was completely unaware of that book's subtleties and satire and loved the big guns and crazy character designs. What can I say? It was the '80s.

CORY: Daredevil. I dug the whole non-super superhero thing a lot. Batman was right up there, too, for the same reason.

What was the name and general premise of the first book you ever made? (That is, when you were a kid, making stories for your siblings and/or friends?)

MATT: When I was fourteen, I made a 12-page book called Deth Comix, because I was a lunkheaded heavy metal kid with a chip on his shoulder. It was a typical '80s Punisher-influenced, gun-toting vigilante crapfest filled with over-the-top violence and rude words. It was confiscated by my eighth grade French teacher when a tormenter of mine took it from my desk and started reading it aloud. From there, it ended up in the possession of my school principal who gave me a talking to one day to see if I was a potential problem. Good thing I was an outwardly clean-cut, polite kid who was still a good little Catholic, despite my growing adolescent angst, so they didn't have to call in a psychologist.

CORY: Last year's The Pig Sleep: A Mr. Monitor Case was the first comic I ever wrote (except for a small insert comic i made for my old band Faceless Lazers).

MATT: Last year was my first TCAF as an exhibitor, but I've been attending them since the beginning, and I was a volunteer at the first. My favourite memory came from the end of the second day of 2013 when everybody exhibiting burst into applause and there was a generally positive air to the room. These types of events can wear a person out, and in my case make me really crabby, but that just made me smile and glad I was there.

CORY: Never been.  Am looking forward to schmoozing and getting my hands on the Mark Connery Rudy book.

MATT: Obviously, I would like to keep collaborating with Cory because I love what he does and he always keeps me on my toes. If that were to go down in flames horribly, I think it would be fun to match up with Mark Connery, because I love everything about his little worlds and wonder what it would be like to be a part of them. If not Mark, it would have to be Vicki Nerino, because nobody does the gross and hilarious with as much panache and style as she does.

CORY: Mark Connery, because he is demented and awesome. Or Matt Daley, because he got me where I am today (insert laughter...or groans).  I wouldn't trade Matt for the world.  Maybe Alan Moore ... but then we'd need an illustrator and I'd hire Matt again.

CORY: Writing our new book, Errol Dynamic, I found to be quite an interesting exercise, because there are only about twenty words in the whole thing, so really, I storyboarded it and trusted that Matt would be able to make the pictures tell the tale.  Our last collabo, The Crab Cannon, was a palindromic comic, where all of the dialogue was the same from the first panel to the last and back again (and told a different story each way). It was a seemingly simple concept that ended up being astoundingly difficult.

TCAF is now over ten years old. What’s the biggest change you've noticed in the world of comics in the past ten years?

MATT: The biggest change, and one for the better, is the larger female presence either attending or exhibiting at events like these. It's nice that things are less sausage fest-y than conventions I went to in high school.

CORY: Comic book movies turning the big-league comic industry into, more or less, a training camp for the big screen. That and 'indie' comics looking so gall-darned amazing.

Your new book, Errol Dynamic, is another collaboration between the two of you. How exactly do you two work together? Does Cory give you a script first, or do you work together to plot?

MATT: Errol is pretty light on dialogue, so I didn't work much from a script with it. Cory sent me a page-by-page breakdown with thumbnails and in-depth panel-to-panel descriptions. We then did a lot of back-and-forth over email while I worked on character designs and the final pages of the book. It was a true collaboration in which Cory had valuable opinions and ideas for the visual side and I gave my own two cents on certain aspects of the story and dialogue.

CORY: I work really fast and Matt works really sloooooooooow. Ha ha ha. I kid. So far, I have written first and handed things over to Matt.  I try to do a little storyboarding of sorts, but I more than trust his judgment on the visual end. Every single deviation he made from my original ideas on Errol Dynamic was an improvement.

Errol Dynamic seems to be influenced by space serials like Flash Gordon or Buck Rogers. How does this book differ from those classic stories?

MATT: I think it differs because Errol is a pretty flawed and pathetic character instead of being an out-and-out hero. That and his lack of a square jaw.

CORY: Not to ruin anything, but Errol is very much not a great dude. Buck and Flash were. They do all share boss names, though.

Matt, your artwork is highly graphic and stylized, and often looks like it's been screen-printed. And you have a real eye for colour. How do you select your colour palette? And likewise, how much time do you spend working on the composition of a page?

MATT: I tend to be drawn to more subdued palettes, so I have a few libraries that I've saved in Illustrator that I keep going back to to fish colours out of. I mess around a bit while designing the characters and the first few pages to see if the colours work with one another and whether or not I have to add any more. I find less colour is often better. I think that comes from designing posters for screen printing in the past. Page composition is something that takes a while for me to do and is something I've yet to perfect, partially due my perfectionism. I sometimes plot out the pages in pencil first, just to get an idea of where I'm putting things and what I might do, but as of late I've been going straight to Illustrator and just playing around with layouts until something really clicks. Once again, Cory's thumbnails for Errol Dynamic were a great starting point and gave me quite a good amount of clarity before going forward.

CORY: I agree. Matt has a great eye for colour. As for his technique, it's still all a mystery to me, and I prefer to keep it that way. We don't work looking over the other's shoulder. We are very back-and-forth and social when it comes to brainstorming, and we are both pretty ego-free when it comes to just saying, 'Mmmmm ... I'd rather do this.'

Visit torontocomics.com to find out more about TCAF and Daley and McCallum's appearance at the festival. Errol Dynamic will also be available at The Beguiling following TCAF.