It seems like a natural flow, to move from arcade noir to graphic noir.

I have such a huge respect for graphic novelists and I feel they are such unsung heroes, particularly in this day and age. Back in the day, (she said, sounding ancient!), illustrators, graphic artists and graphic novelists were revered – and very well paid! One of my great pleasures as an art director was working with such artists and commissioning work that was a precise fit to a project.

Thus far, on 16 Shades of Noir, I've chatted to Evan Munday, a fabulous artist, and we looked at arcade noir and I was dreadfully remiss not to mention Ian Sullivan Cant's lovely design for PAC 'N HEAT – he created a flip book for it which added yet another layer of artistry to the anthology.

And I wanted to go one step further and ask two graphic novelists for their insights into noir and how it impacts on and affects their work, Ron Edding and Brian Roppel.

First up, Drawing on Toronto’s Depression-era underclass in Providence by Ron Edding (in collaboration with Terri Favro) 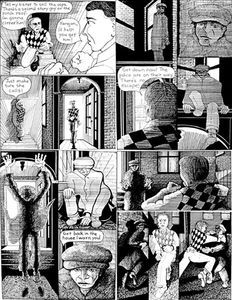 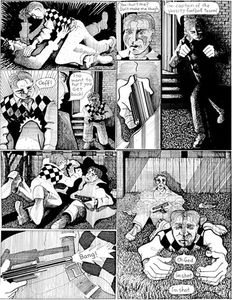 On November 30th, 1933, almost exactly 84 years ago to the day, a member of Toronto’s vast underclass reached up and bit one of the city’s upper class. In true noir fashion, our graphic novel work-in-progress, Providence, depicts characters and events from the point of view of those who did the biting.

Providence fits the noir category because a sense of moral ambiguity runs through the depictions of its main characters and their world of bootlegging parents, abandoned orphans, whiskey priests, and sadistic nuns, doling out kindness and cruelty. Not to mention the story is set in Toronto during the Great Depression, a time when the moral compass of many of the city’s citizens did not point solidly in the direction of “good”.

The event depicted in these two pages from Providence took place on November 30, 1933 –– almost exactly 84 years to the day from this post. We have changed the name of the real victim to ‘ Bobby Hart’, the 22-year-old son of a surgeon. The pages show Bobby trying to subdue a burglar and the deadly consequences of his actions. In the aftermath, Bobby’s efforts were widely acclaimed (by the newspapers, various officials etc.) as heroic and a good example for all young men. However, we have to ask ourselves what compelled Bobby to physically attack this menacing stranger (who really had not done anything yet) instead of just calling the police himself or letting him go. Was it hubris, a code of manhood that he himself may not have understood? In that case it was a truly tragic event: a flawed hero pays with his life.

The burglar is armed and dangerous but murder is not on his mind. Nonetheless, he finds himself unexpectedly confronted by “the captain of the varsity football team”. Should he surrender and wait for the police? Not likely. He gives Bobby two chances to avoid deadly conflict, to no avail, and becomes trapped. His last resort, the gun, is fired in the struggle, fatally wounding Bobby. The burglar escapes and is never caught. A $5000.00 reward is offered for his capture. $5000.00 and no one in depression era Toronto turned him in. An entire community valued this man’s life and his story is worth telling.

Based on real events in Toronto the Not-So-Good, Providence is a work in progress by artist Ron Edding and author Terri Favro. For biographies and more about Edding/Favro’s “Bella” series of graphic novels published by Grey Borders Books, visit http://greybordersbooks.jigsy.com/bella

And next up, Brian Roppel. 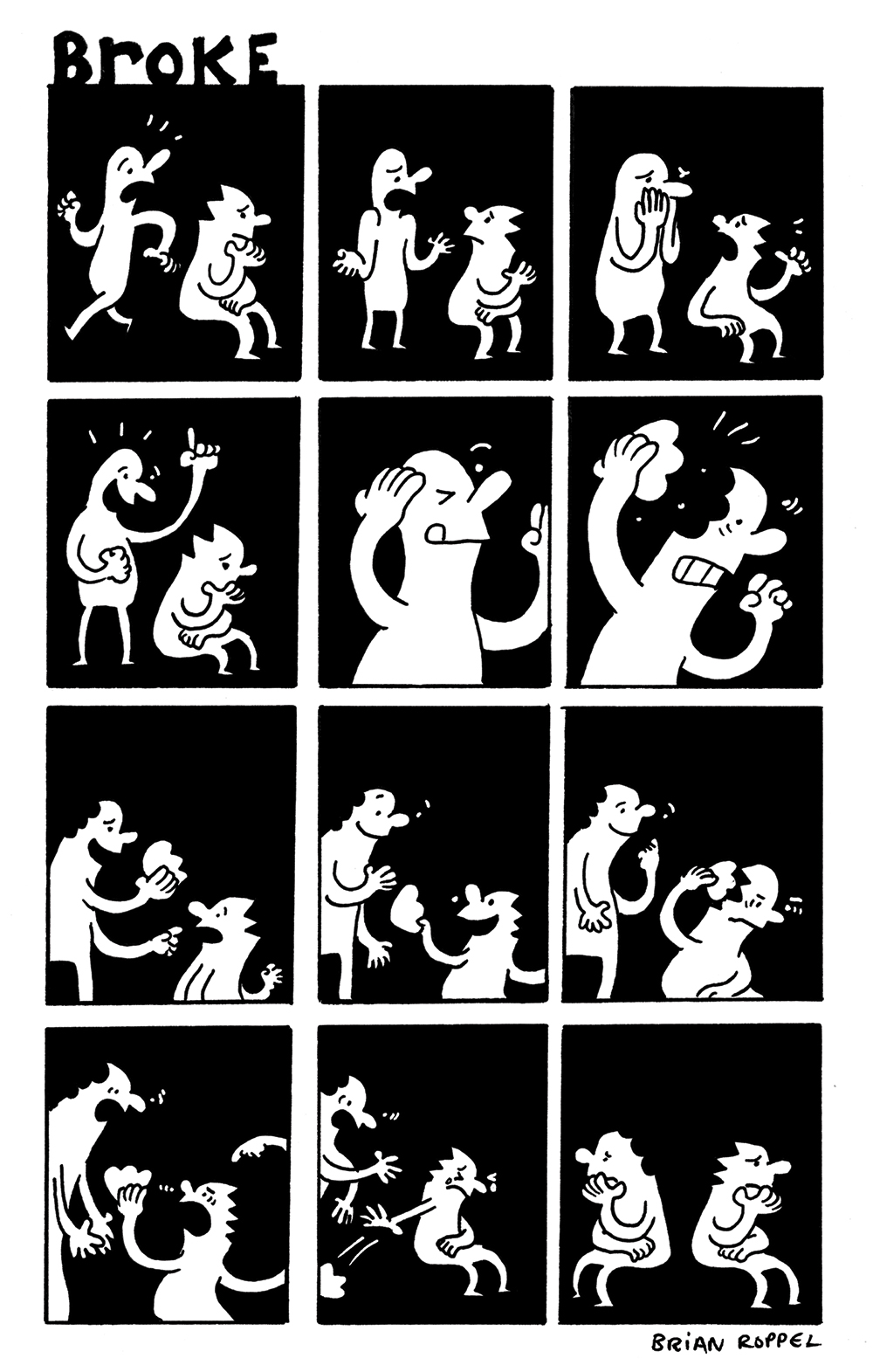 I first saw Brian Roppel's work at Canzine last year and I just loved it. I invited him to comment on the influence of noir in graphic novels – graphic novels have such levelled layers of noir and I was interested to hear his thoughts. He also gave us this wonderful sample of his work.

BR: To elaborate a bit more on my work; after a lot of google-ing of noir and a bit of reflection, I've realized how the genre has influenced my way of thinking about making comic strips. I like to present certain ideas and situations without necessarily taking a concrete moral stance. There are situations out there in the world with no clear solution. It's funny how much grey area there can be in a black+white medium (huhuhuh). I think part of this influence comes from a combination of Noir and my interest in Comedy (not always paired, though).

A more specific example, and though I don't work anything like it, "Batman: The Long Halloween" -a 13 issue series written by Jeph Loeb and Illustrated by Tim Sale- was so absorbing because Bruce Wayne's methods and approach to 'doing the right thing' weren't always in line with the law. He's beating the hell of bad guys and questioning his mental stability. We all have a moral compass, but the tools and approach you use to stay on course with those values should always be scrutinized.

This is sounding way too deep. I just want to connect with people who want to do the right thing but appreciate how difficult it can sometimes be to identify what the 'right' thing is. And hopefully get some chuckles with crude or dark humour. I don't share a lot of my work throughout the year, but I like to collect it together into little zines or books and put something out when I feel its ready.

Many thanks to Ron, Terri and Brian for chatting with us today!

Originally from South Africa, Lisa de Nikolits has been a Canadian citizen since 2003. She has a Bachelor of Arts in English Literature and Philosophy and has lived in the U.S.A., Australia, and Britain. She is the author of seven acclaimed novels, including her most recent novel, No Fury Like That (Inanna Publications). She has won the IPPY Gold Medal for Women's Issues Fiction and was long-listed for the ReLit Award. Lisa has a short story in Postscripts To Darkness (2015), a short story in the anthology Thirteen O'Clock by the Mesdames of Mayhem, and flash fiction and a short story in the debut issue of Maud.Lin House.