(Part 3 of 3. I'm reposting the introductory text from Post 1 to set up the context for Jennifer Still's response.)

It’s been said that the hand-written letter is becoming lost to us, or that for many of us, it has already disappeared. I’ve heard too that longhand itself is no longer being taught in our schools. The physical nature of our hands is quickly adapting for work within the new digital realm. Small wonder that the word ‘digit’ experienced sematic drift; its emphasis of meaning shifted from ‘finger’ to the infinite zeros and ones of programming code. Our fingers came first; then we counted them. (Ah, but now, I’ve got your digits in my I-phone.)

There are some creators who do continue to use their hands in the scribing of words for their poems, stories, novels—and through the endangered art of hand writing letters, to be then sent off by post without certainty the words will ever reach their destination.

Letter writing is only part of the work of the rare species who create beautiful things in various forms. I say things because the realm of kinship that encompasses the mindful, intentional work seen in letter writing is essentially limitless: art postcards, small run hand-bound books, assemblages of found objects, word talismans, poem-art, collages, epistolary montages—created by one, given only to a few; sometimes not given at all. With no larger audience in mind, the connection is particularly intimate. These things are not ephemera. They’re not short-lived or transitory. They are gestures, long-held gifts, not products. In a way, the items become sacred artefacts.

I posed questions to Phil Hall, Christine McNair, and Jennifer Still, three creators who gather words, images, and tactile elements to craft works of art to be held in the hands of, or heard by, only a few people, or one, or none.

Sandra Ridley: Can you describe some of your work in this mode, generally speaking, without giving too much away about its private nature?

Jennifer Still: I'm shifting away from writing poems to making them. It’s like this: when I put something on a page, it reads! The entire space reads! A thread reads. Even that which isn't printed on a page reads (the beaked shadow cast by my pen). This is wildly exciting for me—how words, even marks outside of language, interact with the space they are in. Handwriting reads different from a typed word. There is a tone held in the marks made on a page. A rhythm in their slope. So I think of the poem as a physical space, a field I move around in with all my attention and being. It isn’t always adequate to work left to right, top to bottom, word to word. I'm trying to keep the page as wide as possible while landing something. It’s a move away from that little monotonous metronome of the cursor. 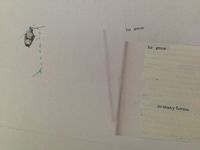 SR: How did you come to this practice? Has it always been a part of who you are and how you engage with the world and those around you? Or is it a new experiment for you?

JS: It has always been that the poem is a pilgrimage for me. Somewhere along the way I acquired this idea that every poem has its extreme object form. So it used to be that I was finished with a piece when I could imagine the materials it would be made of, its shape, size, the space it would occupy in a room. Its wordlessness. And then sometimes I would attempt to build it. It was almost an enshrining to me initially. Talismanic. Not that different from the way our publishing world does it: binding, honouring, wrapping The Finished Work. However more and more I am suspicious of, or perhaps less interested in, or even stymied by The Finished Work. So now I am trying for it the other way around: through the form, the physicality, I am watching for the poem.

At the bottom of it, I'm just trying to have the most fun I can possibly have in language. Much of this is pure aesthetic—working with scissors and paper and fabric and whatever else flies through the window. It's crafty and also super productive for me. Pushing words around a page and watching them spark. Opening my attention to the full space of the page, interacting with other elements—the shadow of a screen, a word bleeding up from the book below. There's an aleatorical element, a chanciness that engages me, that makes the whole gesture larger than my own often tiresome and repetitive thoughts.

So when I make a small book or a poem-object, I am addressing a certain restlessness and perhaps overall dissatisfaction with the words alone. I am looking for dynamism, for language to interact within and beyond itself, a desire to move in as close and honest as I can with the widest, most joyful gesture. And then, this is key, to release my own voice from preciousness and fear, to interrupt my own predictable trajectory. The new word made when the ink runs out—this is where the poem begins. This is what fascinates me.

SR: Do you see your creations as separate from or integrated with your larger writing practice?

JS: Margaret Atwood said “You can’t separate the thought from the form in which it’s being said.”

And Jack Spicer: "The poet likes to think that he's a pitcher, but really he's a catcher."

More and more for me the making is the poem. The ratty edges are part of the net. There’s something honest and raw and intimate about the handmade that I want my writing to embody. So on some fundamental level I believe that if I’m working close, as physically close as possible to the text—touching it, erasing it, breaking it open, smoothing it over itself—that this act might be part of what the poem communicates. That this discovery might be felt as well as read.

It feels momentous and deeply joyful, adventurous and mischievous even, to find a poem by erasing it. Mary Ruefle said that 8 out of 10 times a poem will be stronger after going through erasure—and I am really fascinated by this. The tension of the unsaid, the screaming silence. I heard the phrase "culture of silence” the other day and thought about the gesture the erasure poem makes in this regard. The process is the silence. The process is the secret the poem is imagining.

SR: Is there a freedom in creating in this way?

JS: Yes, a grounded freedom. A freedom that is of the world and the imagination. The physicality of the poem, the quality of paper, the arrangement of pieces, the color or font from a 1950s guidebook—what this triggers without commentary on a pure aesthetic level. And then the act itself, the meditative quality of stitching through a word and watching its constellate disappearance, pinhole by pinhole.

Right now, as I type this, an aspen forest is reflected on the screen of my computer and this is far more interesting than anything I am thinking. When I work with the whole of my hands, I can bring that forest in. Stitch words into leaves.

I am interested in what is contained in the animate gesture of placing words down. In handwriting—the line from thought to voice to pencil tip. The grace in this, the gait.

I read somewhere that most people don’t breathe properly while working on the computer. I’m breathing shallow right now. And so to find the widest resonance in poetry might be through the widest gesture of the arm. The arm branching out from the heart. The breath. To compose in motion. Trevor Herriot recently said he wished interviewers would ask him how much of his work was written while he walks. Following my hand across a page is akin to walking out into a prairie field. It’s all a process of discovery by way of moving forward, of tread.

Sandra Ridley’s first full-length collection of poetry, Fallout, won the 2010 Saskatchewan Book Award for publishing, the Alfred G. Bailey prize, and was a finalist for the Ottawa Book Award. Her second book, Post-Apothecary, was short-listed for the 2012 ReLit and Archibald Lampman Awards. Also in 2012, Ridley won the international festival Of Authors’ Battle of the Bards and was featured in The University of Toronto’s Influency Salon. Twice a finalist for the Robert Kroetsch Award for innovative poetry, Ridley is the author of two chapbooks: Rest Cure, and Lift, for which she was co-recipient of the bpNichol Chapbook Award. Her latest book is The Counting House (BookThug 2013). She lives in Ottawa.