Story time! Yesterday evening, I had the pleasure of doing a talk with the wonderful and talented Olive Senior and I was excited because it was held in the same neighbourhood where my protagonist, Kara, grew up.

In the middle of answering one of Olive’s questions, an older white woman in the back of the room told me not to say “you know” --- it’s a habit of mine when I speak i.e. “One of the interesting things about writing about Toronto is, you know, how quickly the city is changing…” For a moment, there was a pause where no one in the room said anything. It took me a moment to realize what happened, the comment both startled and confused me. When I said, “Excuse me?” she repeated, “You’re a writer, don’t say ‘you know’ when you speak” to which I replied, as calmly as I could, “I’m [not] sorry, but I won’t be policed in the way that I speak.” The audience clapped and snapped in solidarity and when the woman continued, a few people responded in my defense until the woman decided to leave.

The show of support by the audience was touching, heartwarming and very much appreciated as was the way they commended me for advocating for myself when the talk with Olive was over; it provided me with a sense of community and unity. It’s true that with any public event, there’s a certain risk of attracting unpredictable people but I thought about the loaded implications of the moment all night. Interrupting a Black woman at her own function and insisting she speak in a way arbitrarily deemed as “acceptable” is a microcosmic example of not only the various ways society seeks to police the way Black people dress, behave and speak but also an example of the ways in which Black women are consistently undermined. It led me to consider how this was the third public speaking event I’d done since my book came out (not including the launch) and the second event in which I had to deal with a particular kind of outburst.

When I did another talk in early June, a Black woman in the audience thanked me for writing a book for a specific community even if it’s something white readers couldn’t understand. A white woman then challenged her and asserted her expertise in the subject because she taught children about racism as a profession and only stopped talking when I and two other people (including the Black woman who made the original comment) redirected the attention to myself and the moderator. After the talk was finished, she went to different white people in the audience in an effort to gain support for her statements.

I can’t claim this post to be a “how-to” when it comes to dealing with anti-Blackness, racism and coded language since it’s something that I’m still learning to deal with, it’s more a piece (in a long list of pieces by BIPOC writers) exposing the microaggressions and aggressions we face in literary functions and events, from insisting that our fiction is in some way autobiographical to misidentifying us (which has happened to me and another Black writer in the same room): 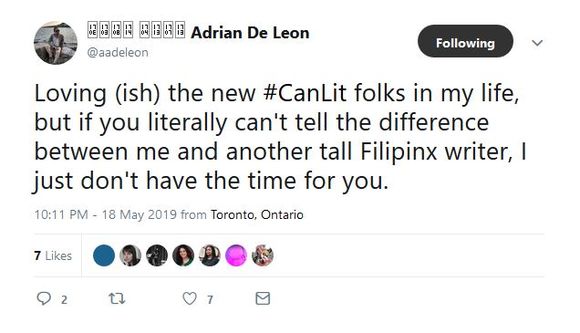 It’s unfortunate to acknowledge the fact that I was lucky to be in a space in which the audience stood with me, as support in such situations should be expected as opposed to hoped for, but in many instances these kinds of displays occur without any interference from the other people in the room: 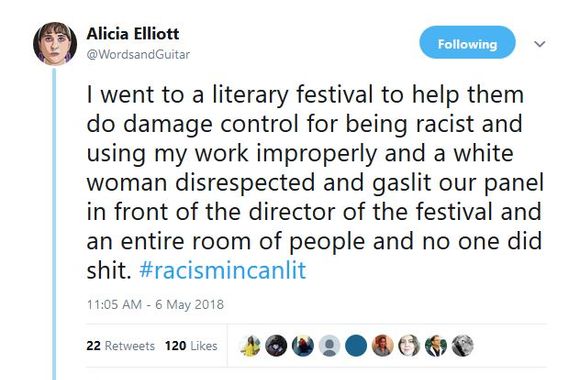 In a post Jael Richardson wrote for Open Book three years ago, she highlighted the twelve reasons why she (and other BIPOC writers) would be exhausted with CanLit and having experienced those thoughts and emotions in academic and workshop settings, I could --- and can --- relate to the list. What I’ve had to contend with over the past couple of months is the slight anxiety before an engagement; the quick reading of a room to try and gauge the responses I'll get; the silent preparation I must do to ready myself to respond to casual ignorance --- things that are familiar to me, things that aren’t out of the ordinary from my everyday life and are second-nature and yet still emotionally and psychologically draining.

It’s been a pleasure to attend events to talk about my work with people who are genuinely interested in listening to me and having a conversation about the themes and subject matter of my writing; but doing so still requires me, as a Black writer, to do what I’ve always had to do in wider society as a Black woman: navigate, self-advocate and keep on keepin’ on.

Zalika Reid-Benta is a Toronto-based writer whose work has appeared on CBC Books, in TOK: Writing the New Toronto, and in Apogee Journal. In 2011, George Elliott Clarke recommended her as a “Writer to Watch.” She received an M.F.A. in fiction from Columbia University in 2014 and is an alumnus of the 2017 Banff Writing Studio. She completed a double major in English Literature and Cinema and a minor in Caribbean Studies at University of Toronto’s Victoria College. She also studied Creative Writing at U of T’s School of Continuing Studies. She is currently working on a young-adult fantasy novel drawing inspiration from Jamaican folklore and Akan spirituality.