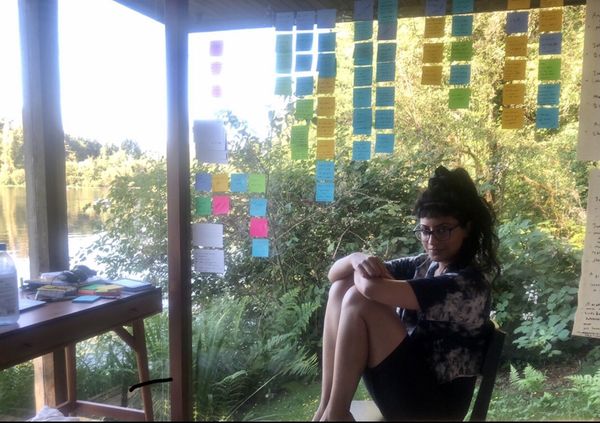 Who doesn’t like writing at home, with the comfort of Maltesers, a perfect sound setup, and being able to write naked? Writing outside of your comfy space is much harder than it seems.

In June this year, I received a month-long artist residency in an enormous glass house. All to myself. Like many other writers, I thought this would be ideal, but it took me an entire two weeks to feel at ease. I made a tonne of music, but that’s not what I was there for. I wrote something only in the last week of my residency, when the house had finally changed me.

In my first two weeks of the residency, I kept trying to recall the cards, photos, and notes plastered all over the walls of my little East Vancouver home. At home, I was using the spare bedroom walls and the bedroom and toilet doors for notes, photos, cards. I would then sit in the middle of the kitchen to write, so that I could see the bedroom walls and the bedroom and toilet door all at the same time. I wanted to be surrounded by all my notes at all times. I couldn’t have known that this attempt at one-bedroom-suite omniscience was constraining my work.

It was so hard to let go. I had taken photos of the walls in fear of not being able to finish my draft without referring to them, but it just didn’t feel the same. After severe doubt, during which I felt completely unmoored without my CSI-like walls, without my chocolate, without the privacy of actual walls, I began to write on the walls of the glass house with dry-erase markers. A fresh start. I would do it all over again. I would write on the walls like I used to when I was a kid. I would write the entire damn thing over, sticky-note structure and all. When I began writing on the glass, it was as if my four-year-old self had returned. It was like having a part of me finally receive permission to be me again. I felt like a kid in the sense that I was inhabiting myself more fully than I had been when I was in the comfort of my own home. I had room to be all my selves.

When I first arrived at the glass house, the thing that scared me most was how small I felt – it was an instant feeling. The space and the architecture of the house demanded that I rise to a bigger self. It was terrifying. I realized that my impostor syndrome and self-doubt was so bad that I felt small and undeserving of a space just for my writing. I had to realize who I was in order to live and write in that house. I am a writer despite all the odds that I have faced! And I love my story and my characters! And I want to tell this story so badly!

The space of the glass house by the lake made me confront my sense of self-worth as a writer. It also made me realize that my one-bedroom-suite omniscience was restraining me because it kept my story fixed. I had knocked out three drafts after all. I had it all figured out. What could possibly be wrong? A part of me knew my story had yet to do a bit more growing, but I couldn’t have articulated it because I hadn’t experienced how transformative a big open space could be. I literally didn’t have space.

Now if I hoard up on notes, photos, and cards again, I’ll give myself two weeks max to live with them. Not three years like I did before. A fresh slate means you’re ready to change – ready to play, ready to trust yourself to get to the finish line, to not be afraid of becoming someone new, because once you let go of the work, you let it remake you.

It might be a while until I receive another life-changing residency in a beautiful place. I’ve been on the road, living between provinces, motels, and kind people’s houses, but the difference now is that the new blank spaces I live in no longer scare me. They make me want to write.