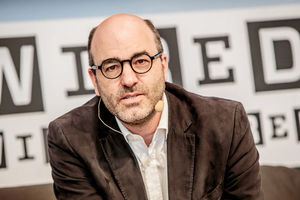 Alain Deneault is known for his take-no-prisoners approach to challenging corporations and political systems that undermine the public good (in particular, he is well known for being the target of lawsuits from large gold companies after publishing an investigative book raising issues in foreign mining operations).

Now he has turned his insightful lens to a subtler challenger: the mediocre. In Mediocracy: The Politics of the Extreme Centre (Between the Lines Books, Translated by Catherine Browne), he observes how helpless most have us become in a new, service- and tech-based economy. It's a chilling indictment and one that pushes back against what has become a common lifestyle for most, to challenge readers to recognize an insidious social risk.

We're excited to welcome Alain to Open Book to share his insights about mediocracy, talking about why he titled the book as he did in our Entitled interview series. He tells us about why he doesn't "believe in inspiration so much as expiration", discusses how our system of late stage capitalism contributes to the rise of mediocracy, and explains how "mediocracy" may sound like a clever portmanteau in English, but in French is a real word dating back to the 19th century.

Editor's Note: Alain Deneault's responses for this interview were translated from French to English by Catherine Browne. Open Book thanks Ms. Browne.

Mediocracy achieves what is to be expected of a title: a summing up not only of the book’s theme but also its tenor. The word mediocracy frees us from the moralistic attitude we might be expected to adopt in relation to “the mediocre”. Instead, we are invited to define the professional, academic, institutional, and political order that imposes mediocre behaviour on its subjects, whatever their true disposition may be. Mediocracy is not a race to the bottom, as is sometimes said, but a race to the average. Powerful organizations want to make sure that today’s subjects, in their way of thinking, the development of their vocabulary, their technical abilities, their intimate desires, and even the expression of their being, will comply with standards presented as average, normal, and natural. Expectations must be met, and these expectations are rigorously calibrated. There must be a certain propriety; you must know how to behave, master certain fundamentals, respond appropriately to guidelines and protocols—but you must not go any further. You must not have an intense, autonomous, or radical interest in critical, political, moral, or philosophical questions of any kind. Don’t step out of bounds. Worse yet, in the thought system defined by the idea of “governance,” which is profoundly different from political thinking, power expects today’s subjects to deduce, all by themselves, how to handle these rules. Mediocracy sums up the matter.

I don’t believe in inspiration so much as expiration. I mean that I believe in work. It doesn’t really matter where you find a title—who really remembers that? What matters is the toughness of any given option, its capacity to hold up over time, to resist the scrutiny that it will be subject to. The word mediocracy is not a neologism in French. It was often used by the bourgeoisie in nineteenth-century France when the middle class began to educate itself, to read, to take up arts and politics, in short, to claim some degree of power. I wanted to renew its meaning. Mediocracy is certainly the title that people have most often discussed with me. Often, actually, they are content to project on it whatever they want without bothering to read the book. In that sense, as a title, it may be insufficiently resistant to various forms of cooptation. Many assume that the mediocre to which it refers are other people, and especially our political representatives. The point, however, is that the ideological order in which we find ourselves—late-stage capitalism—is working to make all of us mediocre, whether we like it or not.

To disrupt, as well as provide an idea of the way in which that disruption must take place.

Capital by Karl Marx. This title can still make people afraid. It is able to suggest not only that the book will deal with the topic, but that capital must be conceived as a central and heavily problematic thing. And we perceive the title in conjunction with the size of the book, which tells us that we are embarking on a major theoretical voyage.

The only debate was whether or not to include an article in the French title since I had already published a journal article under that name. We finally settled on La Médiocratie in order to more clearly circumscribe the book’s central question, in a less tentative way than if we had simply called it Médiocratie. In translation, publishers can choose between two titles, La Médiocratie and Politiques de l’extrême centre, which is the title of a short work that has been appended to the main book. Hence, in English, Mediocracy: The Politics of the Extreme Centre.

If I don’t come up with a title quickly, I usually know that it will take a long time. My study of a extractivist corporation, Total, in a way simply ensued from the title: De quoi Total est-elle la somme? (What is Total the sum of?). The book’s aim is to describe the primitive accumulation of capital from the 20th century up to today, building on one example. But, of course, a book is rigorous, and its title is satisfactory, only if it is shaped by a reasoned and thoughtful process of questioning.

The polysemous nature of the word economy in Western history, the goal being to take the economy away from economists. That might be the title of the book, actually.

Alain Deneault is a writer, philosopher, and academic known for his exposés of off-shore tax havens and mining giants. But now, he delves in to our present-day struggle against a global regime that seeks to extinguish critical thought. He is a Director of the Collège international de philosophie in Paris and is a professor of sociology at the Université de Québec à Montréal. Médiocracy has sold over 50,000 copies in French.

Born in Indiana, Catherine Browne grew up in Montreal. She has a degree in history from the Université de Provence. A professional translator since the 1980s, for the past fifteen years she has conducted guided tours designed to provide Montrealers with new ways of thinking about their city’s past and present.

Mediocracy: The Politics of the Extreme Centre

Alain Deneault, translated by Catherine Browne , Between the Lines Books

There was no Reichstag fire. No storming of the Bastille. No mutiny on the Aurora. Instead, the mediocre have seized power without firing a single shot. They rose to power on the tide of an economy where workers produce assembly-line meals without knowing how to cook at home, give customers instructions over the phone that they themselves don’t understand, or sell books and newspapers that they never read.

Canadian intellectual juggernaut Alain Deneault has taken on all kinds of evildoers: mining companies, tax-dodgers, and corporate criminals. Now he takes on the most menacing threat of all: the mediocre.