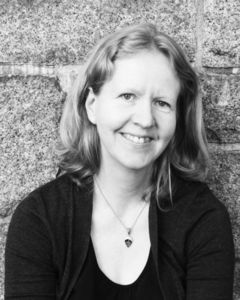 When the remains of a blue whale were found on a remote PEI beach, environmentalists had a unique opportunity not only to learn more about the biggest animal in the world, but to share the whale that would become known as "Big Blue" with the public.  Now displayed in Vancouver's Beaty Biodiversity Museum, Big Blue's skeleton had a fascinating journey from one side of the country to the other.

That journey captured the imagination of Anita Miettunen (who previously worked at Environment Canada). Struck by the beauty and awe-inspiring scale of Big Blue, she dove into an in-depth research process to discover more about the whale's story. The result is Big Blue Forever: The Story of Canada's Largest Blue Whale Skeleton (Red Deer Press).

We're excited to welcome Anita to Open Book today to talk about Big Blue Forever, and the enduring fascination these huge mammals inspire. She tells us about why Big Blue meant so much to her, about learning the many roles involved in bringing Big Blue to the public (including discovering the job of skeleton articulator), and what's next for her.

How did you first come across the story of Big Blue and her journey? What drew you to write this story for young readers?

Several years ago, when I was living in Ontario, I first read an article about a blue whale skeleton being installed at the new Beaty Biodiversity Museum in Vancouver. I thought that was pretty neat. Later, after I’d moved back to Vancouver, I began volunteering at the museum and was instantly drawn to Big Blue’s skeleton. Her immense size drew me in of course, and every time I saw her, hanging from the museum’s ceiling, I wondered about her life in the wild, and how and why she came to be there. As a writer, I felt kids would love to learn about Big Blue and a book would help connect others to her story.

Whales seem to capture the imagination of young people in a special way. Why do you think that is – what is it about whales, in your opinion, that creates this emotional connection and fascination?

Whales are captivating to us since we know they are mammals just like us. For example, baby whales drink milk from their mothers with whom they have close bonds and some species are very social and live in groups. Yet whales are also mysterious. They live underwater in the ocean and are rarely seen. Our imaginations can go wild thinking about how they live and behave and this shows in some of our literature! Whales also have an important place in many indigenous cultures around the world. While we still have a lot to learn about whales in nature, it’s fascinating to realize that they can travel and communicate across vast distances. It’s also astonishing to think about how big these mammals are. The blue whale is the largest animal that has ever lived on our planet.

Big Blue is now displayed at the Beaty Biodiversity Museesum. Why is it important that the skeleton be publicly displayed and whom do you think the display is targeted towards?

This skeleton display is a wonderful way for people of all ages and backgrounds to learn more about the endangered blue whale and how we’re connected to other creatures in the natural world. Few people will ever see a blue whale in the wild. And their skeletons are also rare to come by. Big Blue is suspended in an atrium and can be seen on two museum levels so people can walk around and underneath her. It’s a unique sensory experience and people can enjoy comparing their own bones to the whale’s while also appreciating this animal’s tremendous size. I don’t think anyone leaves without being awestruck by that!

What was the most surprising thing you learned in your research, about how a project and re-assembly of this scale is conducted?

Until I did my research, I didn’t fully grasp the complexity of the blue whale project. I discovered how logistically complex it was to clean Big Blue and accurately collect and catalogue all of her bones and bone fragments in the field so she could be correctly reassembled later. I learned that not only scientists, but also artists worked on the project. Skeleton articulator was a completely new job category for me, but the expert articulators played an essential role. I was impressed at how all the individuals and sponsors involved came together to realize the project through its many phases and challenges. Nobody knew exactly how to clean a stinking skeleton! But the scientists were not afraid to experiment or to call on help from others. Even with setbacks, they never gave up.

Tell us a little bit about what your writing and art space was like for this project. Do you work from home or a studio? What do you find you need from a space in order to work?

I wrote most of Big Blue Forever on my laptop, sometimes at a café or on the road if traveling, but mostly at my kitchen table. Through circumstances, I’m back in the same kitchen where I used to write and draw as a child. While I work, I love looking outside through the kitchen window at birdlife and the familiar fir tree (now a giant!) I’ve known for decades. I’m lucky to have such a serene view, even though I live in the city, since peace and quiet help me create. But at crunch time – completing final revisions for my editor – I worked late at night, still in my kitchen, with Laurie Brown’s beautiful playlists curated for The Signal on CBC radio for company.

I tend to have various projects on the go. But my main project right now is completing a draft for a young adult novel I’m writing as part of my Masters thesis in children’s writing at the University of British Columbia. This is a new genre for me so there’s a lot to learn. But my teen character has a voice and a story begging to be told about her unusual family, so write I must!

Anita Miettunen is a writer and illustrator who loves exploring the natural world. She has previously worked for Environment Canada and currently coordinates a program supporting early-career research scientists addressing pressing biodiversity issues across Canada. She also volunteers at the Beaty Biodiversity Museum in Vancouver where over 100,000 visitors have seen Big Blue's skeleton since 2010. Anita has traveled worldwide, often on her bicycle and has lived in Vancouver, Toronto, Ottawa, England, Finland, and Japan. She currently lives in Vancouver, close to the ocean, in a little white house under a giant fir tree.

Big Blue Forever is inspired by the true story of how a blue whale skeleton found on a remote beach in PEI was shipped cross country and reassembled for permanent display at the Beaty Biodiversity Museum. This unique Canadian adventure story is complemented with intriguing facts about blue whales and their environment, and the fascinating process that museums go through to uncover, prepare, and reassemble skeletons for display and study.