The Festival of Literary Diversity (aka the FOLD) is nearly here! The fastest-growing literary festival in the country is back for a third year, running from May 3 to May 6, 2018 with an incredible line up.

The FOLD's explosive popularity speaks to Canadian readers' thirst for diverse, exciting, beautiful literature, and we are excited that to have the opportunity to speak to three of the incredibly talented authors at the festival: Fartumo Kusow author of Tale of a Boon's Wife (Second Story Press), Robyn Maynard author of Policing Black Lives (Fernwood Publishing), and David A. Robertson author of When We Were Alone (HighWater Press), about what they'll be doing and why a festival like the FOLD is so essential.

We hear about a publishing success story that started at the FOLD itself, a trivia night that had a very happy ending, and hopeful forecasts for the future of diverse CanLit in the face of long traditions of exclusion.

Best of all, you still have a chance to attend the FOLD this year (including Fartumo, Robyn, and David's events!) - tickets are for sale online now. You can also check out our interview with FOLD's Artistic Director and Founder, Jael Richardson, to learn even more about the festival.

Tell us about how you become involved with the FOLD and what you'll be doing in the festival.

In April of 2016, I saw a Facebook post for the first FOLD. Just the idea of attending a festival devoted to diverse literature excited me. I had no expectations beyond basking in the glow of diverse stories and hearing Lawrence Hill present was the icing on the cake. At this point, my manuscript had been in submission for close to a year. At the festival, I met a representative from Second Story Press, I publisher that had my manuscript, in the publisher’s court. I introduced myself and followed it with an email. By December of 2016, I had a contract with Second Story Press. I am coming to the FOLD this year as an author with my novel, Tale of a Boon’s Wife, published by Second Story Press.

I was delighted to be invited to join the FOLD festival and I'm looking forward to sharing my work in this space. I'll be participating in a conversation with Tanya Talaga, hosted by Amanda Parris, called The Stories We See, and will also be giving a workshop on researching non-fiction works, both taking place May 5.

Oh, there’s a funny story there. For me it’s funny. It may not be as funny for Jael Richardson. And this is somewhat of a guess, but I like to think it’s the reason why I’m joining the FOLD. So, last year, for the Saskatchewan Festival of Words, I got to know a few writers that I keep in touch with. One of them was Jael. Our time together at the Saskatchewan Festival of Words (which I will now shorten to SFOW) was highlighted by their Trivia Night, a long-standing tradition for that literary festival.

I was on a team with Angie Abdou (who apparently was, and proved to be, boss at literary trivia). Jael was on another team. Long story short: we won, Jael lost. Somehow, Jael got over the disappointment of this loss to ask me to the FOLD.

All kidding aside, I get asked to do a fair number of festivals, but I was very honoured to get asked to come to the FOLD. As an Indigenous writer, and somebody who writes, and talks, a lot about the value in diversity, and our strength in it, I appreciate the work the FOLD does. So, I’m coming! And while there, I’ll be doing three events. One is called The Lit Life, a panel on writing and why I write what I write (try to say that three times fast), another is The Edge of Suspense, where I’ll get to talk about my YA mystery novel Strangers, and I’m also doing a reading of When We Were Alone for kids. I’m excited for all of it!

What has your experience of diversity in Canadian literature been, as a writer and a reader? 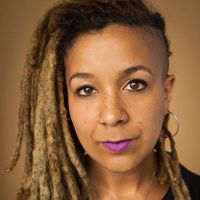 Researching and writing about Black life in Canada, it has been impossible not to be aware of the lack sustained attention given (by the broader public and mainstream media) to so many important works by Black writers, activists, scholars, and cultural commentators. This erasure, beyond a few widely celebrated and award-winning works, has spanned across several generations. This is what led me to put together the #BlackLivesMTLSyllabus to highlight the works of Black writers from, or writing about, Montreal, where I currently live. At the same time, it's an exciting time to be following Black writing:  we're so lucky to be blessed with new works published by Rinaldo Walcott (Queer Return), NourbeSe Philip (Blank) and David Chariandy (Brother), and shortly, a new work by Dionne Brand. Also works by young writers who have so much to contribute, like the brilliant Somali Semantics zine that came out a few years ago.

When I was younger, I would say it was negative. There weren’t a lot of diverse books either being written, or being supported. And Indigenous Peoples were particularly poorly represented in literature, especially in comics. Stories written by non-Indigenous writers who weren’t putting the work in to understand Indigenous peoples, cultures, or the impact of history. Let alone history itself.

The books I do remember reading while growing up were April Raintree, Medicine River, and Green Grass, Running Water. The latter two books came out when I was a teenager. There may have been more books, but I don’t feel they were supported. Still, those two authors, Culleton (now Mosionier) and King, influenced me as I worked to become a writer. When I did get my first book published, I feel like it was during a time of reclamation. Now, there are many Indigenous books getting published, and by Indigenous writers. Own Voices stories, as they call them. It’s encouraging, and it’s also encouraging that they’re being read. Last year, almost half of the bestselling books in Independent bookstores were by Indigenous writers. Wagamese. Dimaline. Vermette. Vowel. Dupuis. Gray Smith. Kinew. Jay Odjick (illustrating for Munsch). Florence. Robinson. King. And myself. And so many more amazing authors are creating books in all areas—fiction, non-fiction, YA, children’s literature, poetry… and I suppose what I have to say about all that is it’s a good time for this to be happening. Because we need stories so that we can learn, understand, and share.

A book I enjoyed which could serve as an example of diverse literature is Saints and Misfits by S. K. Ali.

I hate to be one of thousands that might recommend this book, but I also don’t really hate to be recommending it. Because I do feel as though every Canadian should read it. And that’s The Marrow Thieves, by Cherie Dimaline. Not only is the book amazing, but she is amazing. I got the chance to spend time with her at the Governor General’s Awards last year, and she’s genuinely awesome. What I loved most about the book is, well, a few things.

First, it’s how Dimaline used YA dystopia to share, and educate, about colonial history in Canada. It was woven into the narrative seamlessly, and beautifully. And really, the book is integral now, in the time we are living in. To me, it warns about the perils of repeating the past. Because I talk about this a lot, probably what I loved more than anything was its attention to story. It talks about Story as a character in the book, as a living breathing entity. And it is. The power of story, the stories of our past, of our traditions and beliefs, and how those stories can save us. Recently, I’ve been doing the same thing. I’ve been talking about story as the only true path towards reconciliation. I appreciate that so much about Dimaline’s book. You will too.

For more information about the FOLD and the full 2018 schedule, visit their website.

Born in Somalia, Fartumo Kusow immigrated to Canada at the start of the civil war. Her first novel, Amran, was serialized in October Star, Mogadishu: Somali National Press in 1984. Since her arrival in Canada in 1991 she has earned a B. Arts Honours in English Language and Literature and B. Education from the University of Windsor. She now teaches English literature courses for the Greater Essex County District School Board.

Robyn Maynard is the author of Policing Black Lives: State violence in Canada from slavery to the present. The book, which has received glowing reviews in Maclean’s and the Toronto Star, is the first of its kind to trace the subjugation of Canada’s Black population from over two centuries of slavery into present day issues like racial profiling and policing killings.

David A. Robertson is an award-winning writer. His books include When We Were Alone (Governor General’s Literary Award, McNally Robinson Best Book for Young People), Will I See? (Manuela Dias Book Design and Illustration Award Graphic Novel Category), and the YA novel Strangers. David educates as well as entertains through his writings about Canada’s Indigenous People.