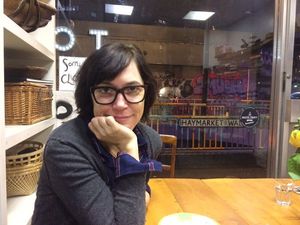 Gillian Best is making waves with her debut novel (we couldn't resist!).

The Last Wave (House of Anansi) is an intergenerational drama set in Dover, spanning the decades from the 1940s to the present and following champion swimmer Martha, whose many feats include swimming the English Channel not once but ten times.

Martha's relationships are complex -- with her husband, her children, and her friends. Her relationship with the sea however is constant and comforting. It is her consolation and her freedom in a life that is otherwise tethered by the constraints of a woman in her time and place.

The novel is an ambitious undertaking for a first book, but Best is more than equal to the challenge. Martha is a complicated, relatable, fascinating character, and her swimming both evokes beautiful imagery and weaves a sophisticated, thematic line through the many years covered in the story. The Last Wave marks the arrival of a powerful new voice in CanLit.

So we are awash (get it?) in happiness to have on Open Book today Gillian's responses to our version of the famous Proust Questionnaire, a quiz meant to reveal a writer's true nature. Gillian's totally charming answers have us adding another writer to our list of literary crushes - read on to hear her tell us about the hold the sea has over her (just like it does for her main character), the historical surfer she admires, and a postcard from Jonathan Franzen.

It changes as I do, but top contenders are to write fiction full time and swim in the sea. And to have either a PA or a 1950s housewife to deal with household administration. To fall in love with a man I feel like I’ve known my whole life.

What is your idea of misery?

To be unable to fulfill one’s potential.

Nearer the sea, with all my friends and family within the same post code.

Humour with a strong whiff of sarcasm.

Studying for a Master’s degree and PhD as a foreign student.

Loyalty, honesty, humour, and the fact that they’re still my friends even though there’s a good chance I live nowhere near them.

What is your favourite occupation?

Writing, but lifeguarding is pretty good too.

The answer varies, but usually includes: a bird, a giant squid, a surfer, a stand up comedian, taller...

What is your favourite colour?

What is your favourite flower?

Peonies from my Mom’s garden, and though it’s not just the one flower, but many, when, in mid-spring my Mom’s lawn blooms in a sort of accidental meadow kind of way.

What is your favourite bird?

Duke Kahanamoku who was the father of modern surfing and an all round waterman.

Flaubert but only because I was made to read Mme Bovray so many times it’s painful to even think about. He’s certainly not the worst offender but I do have a bone to pick with him.

This is a long list that changes frequently, depending on mood and weather, but in no particular order: Margaret Atwood, Jonathan Franzen (in part because he wrote me a postcard in response to a letter I’d sent him), Haruki Murakami, Don DeLillo, Donna Tart, William Gibson, AM Homes, William S Burroughs.

Who are your favourite poets?

Who are your favourite heroes in fiction?

The people who write them. There’s no one character I think of as a hero, there are characters I’ve loved, liked, and wished I could meet, but I prefer their writers.

Mothers. People who have put up with discrimination of any kind and haven’t lost all faith in humanity.

Who is your favourite painter?

My dear friend Richard Stone who would probably add he’s also a sculptor. His painting The Last Wave inspired my book.

Coffee, beer, bubble tea, Glaswegian tap water (seriously it is the most delicious water you will ever taste).

What are your favourite names?

Martha and John. Not because they’re the names of my characters, but there’s a Tom Waits song that made me fall in love with the name Martha. And there’s something of a crisp white shirt about the name John.

It’s a long list, but chief among my complaints: bananas (I just think they haven’t lived up to their potential), mean-spirited unfairness, cruelty – willful or otherwise – and places that won’t let you use the bathroom unless you’re a customer.

I would love to be a big wave surfer. And to be able to hold my tongue at times.

Quickly, and under improbable circumstances.

It varies between being delighted and astonished when I hear people’s comments about my novel, and under pressure to write the next one – I want it to be even better than The Last Wave!

Getting my book published and earning a PhD after getting spectacularly bad grades in high school.

I don’t so much have a motto as a series of rules I try to follow: Always look good; Vanity will kill you; No rap music in the car before 11am (specifically for driving on the 401); You’re young; The world is big; You’ll be fine; Do not be boring.

Gillian Best is a writer, swimmer, and seaside enthusiast. She won the Bronwen Wallace Award for Short Fiction and was a finalist for the Bridport Prize International Creative Writing Competition and Wasafiri’s New Writing Prize. She was also longlisted for the WriteIdea Short Story Prize. She has studied at York University, University College Falmouth, and the University of Glasgow. Originally from Waterloo, Canada, she now lives in Bristol, U.K.

A beautifully rendered family drama set in Dover, England, between the 1940s and the present day, The Last Wave follows the life of Martha, a woman who has swum the English Channel ten times, and the complex relationships she has with her husband, her children, and her close friends. The one constant in Martha’s life is the sea, from her first accidental baptism to her final crossing of the channel. The sea is an escape from her responsibilities as a wife and a mother; it consoles her when she is diagnosed with cancer; and it comforts her when her husband’s mind begins to unravel.

An intergenerational saga spanning six decades, The Last Wave is a wholly authentic portrait of a family buffeted by illness, intolerance, anger, failure, and regret. Gillian Best is a mature, accomplished, and compelling new voice in fiction.