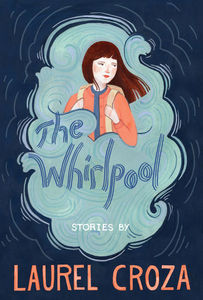 Laurel Croza has become a beloved name in picture books through I Know Here (illustrated by Matt James), which won the prestigious Marilyn Baillie Picture Book Award (amongst many other honours), and its follow up, From There To Here. Now she's bringing her considerable storytelling chops to older readers with the publication of The Whirlpool (Groundwood Books, illustrationed by Kelsey Garrity-Riley).

The short story collection - perfect for middle grade and early YA readers - features a cast of achingly relatable, real characters, even when Croza is at her most creatively (and wonderfully) strange. From a doll who longs for the right child to take her home to a new girl who suspects one of her classmates might be a wolf, the seven stories are fresh and wild, but always grounded in the longing for belong and connection so familiar to young readers. Garrity-Riley's black and white illustrations offer a gorgeous complement to Croza's creative tales.

We're excited to welcome Laurel to Open Book today to celebrate the tales that have inspired her as both a writer and a reader as she takes on our WAR: Writers as Readers series. She tells us about her book-inspired 'cheese dreams' (which we would like to sample!), the books that led her not only to her own writing but to her publisher too, and her rocking next read.

Heidi. My mouth still waters thinking about that ‘toasted’ cheese Heidi’s grandfather made for her. I used to recreate it for my kids. Except I substituted Ontario suburb for Swiss mountaintop, oven for fireplace, store bought buns for homemade bread, and Kraft mild cheddar for goat cheese. I called them cheese dreams. My kids loved them.

Riders of the Purple Sage by Zane Grey. I was 12 and living in northern Manitoba and cowboy books were the only books sold at the commissary. And - oh my god! - there was ROMANCE in that book!! I was hooked. Every week, as soon as I got my allowance, I bought another one. I read every Zane Grey that store had, all the Louis L’Amour too.

The Chrysalids by John Wyndham. I first read it in high school. I have no idea why I have re-read it so many times, I’m not a sci-fi reader. Maybe because of David and Rosalind. What can I say? I loved ROMANCE.

A Short Guide to a Happy Life by Anna Quindlen. I’m not an advice book reader but there’s some really good stuff in there: “Get a life”, “Life is short”, “I show up. I listen. I try to laugh”. And - bonus! - it’s a quick read so my seventeen year old self would finish it in a glance and get back to reading the REALLY good stuff - Georgette Heyer, Barbara Cartland, Jane Aiken Hodge - ROMANCE! Again, what can I say? It was all about the romance. Should I be embarrassed? I’m not!

The Crazy Man by Pamela Porter. I read this book shortly after I began writing and it blew me away. It still does. Loss. Love. Hope. I hold it up as a model of what a kid’s book can be. It also led me to Groundwood Books. I started reading other authors published by them - Brian Doyle, Tim Wynne-Jones, Martha Brooks - and I started daydreaming about, one day, sending a story to Groundwood.

Bruce Springsteen’s autobiography Born To Run. I’ve been reading it off and on, sparingly, since it was published. Sparingly because I don’t want to finish it. His music is the soundtrack of my adulthood. His songs have given me joy, solace, inspiration. They influence my writing. If only I can touch a reader’s heart like Bruce’s songs have touched mine. BRUUUUUUUUUCE.

Born to be a Mom. There would be some romance, my recipe for cheese dreams, a little advice but not too much. And, a whole lot of love. Because, for me, that’s what it’s all about. MOM! MOM? MOMMMMY!

Laurel Croza is the author of the picture book I Know Here, illustrated by Matt James. It won the Boston Globe–Horn Book Award, the Ezra Jack Keats New Writer Award and the Marilyn Baillie Picture Book Award, among many other accolades. She also wrote the sequel, From There to Here. The Whirlpool is Laurel’s first short-story collection. She lives with her husband in Toronto.

Charity takes small steps to escape her controlling father. Jasmine endures the rumors about her at school, even though no one really knows what happened last summer. The Oh! So Perfect Hair Dolly wishes for just the right child to take her home from the store. Nicola has a run-in with a classmate on her first day at a new school in the big city — or is the classmate a wolf in disguise? A squirrel ruminates on the nature of life and death. Dani fights for her dream, in spite of her father’s insistence that her older brother should be the one to play hockey. Mike finds the kind of family he has longed for in his coworkers at the restaurant where he works.

In these seven stories by Laurel Croza (author of the award-winning picture books I Know Here and From There to Here), five teenagers, a doll and a squirrel break out of the expectations placed upon them. Featuring beautiful black-and-white illustrations by Kelsey Garrity-Riley.