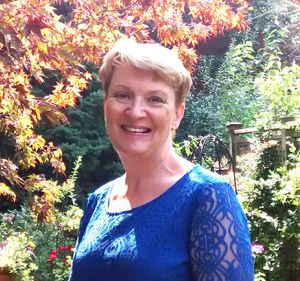 In Literary Titans Revisited: The Earle Toppings Interviews with CanLit Poets and Writers of the Sixties (Dundurn Press), editor Anne Urbancic uses recently unearthed recordings to take us back to the early days of CanLit and the powerhouses who shaped it.

Between 1969 and 1970, radio interviewer Earle Toppings recorded discussions with sixteen Canadian authors who went on to become icons. Margaret Laurence, Sinclair Ross, and Al Purdy are just a few of the household names who appeared on Toppings' program. These recordings provide a unique insight into the tumultuous, influential early days that shaped Canadian literature for decades to come. Packed full of transcripts, as well as biographies and an interview with Toppings himself, Literary Titans Revisited is enough to thrill any CanLit or Canadian history junkie.

We're excited to welcome Anne to Open Book today as part of our Entitled Interview series, where we examine the importance and impact of titles. Anne shares a title-centric anecdote featuring her daughter and Marilyn Monroe, talks about why she hopes to be a beach read, and reveals the Toronto writer whose titles she loves.

Titles are particularly quirky pieces of information, demanding full attention from the outset. Right then and there a reader will decide whether or not to bring a book home or watch a movie. I learned this years ago in a particularly striking way when my youngest daughter, still a preschooler, proudly announced that the movie coming up on our TV screen was a funny, happy movie about getting married. "How do you know this?" I queried. "Because the letters of the title look like they are dancing on the screen." We were about to embark on a Saturday night of a classic Marilyn Monroe comedy, How to Marry a Millionaire, and my daughter was right, of course.

But I remember thinking at the time that titles were probably something I should focus on more intentionally, whether on the screen or on published material. The title for this book Literary Titans Revisited: The Earle Toppings Interviews with CanLit Poets and Writers of the Sixties did not come without effort. Since the whole project was produced by a team of independently minded folks, the title, one of the last items we decided before sending the final manuscript, went through various considerations.

In my writing and reading experience I have found, roughly speaking, two categories of titles: the no-nonsense (usually including a colon) functional and the capriciously creative. In my academic life, I deal mostly with the former: titles that explain succinctly what my paper or book is about. No cool embellishments for my last book, for example: Reviewing Mario Pratesi: The Critical Press and Its Influence (UTP, 2014).

Despite the subtle wordplay of the words before the colon to intimate that the contents would be both a review of 19th century Italian author Pratesi’s works and, in addition, would also focus on the press reviews of these works, the post colon suffix is all brisk academic business. This is not a book that you would sit on a beach with, although in my heart of hearts, I rather hoped someone would. This is the kind of title that has to explain in a few words why a busy academic (who perhaps is eager to get on to a more coveted pile of pleasure reading options) should spend time perusing the rest of the volume.

The second category of title is much less practical, more witty perhaps, certainly more creative. It belongs to the host of books and stories that are mostly, but not always, fictional. It belongs to poetry as well. The imaginative element leaves you suspended in a pleasant enigma, desiring more. I think of books like Pride and Prejudice (originally called First Impressions), or the titles of some of the literary titans included in our volume: Two Solitudes (MacLennan) or Cabbagetown (Garner). Or poems like “The Compass” (MacEwen) or "The Bear on the Delhi Road" (Birney).

There is also an in-between category that allows us the delight of discovering that In Search of the Perfect Lawn (Michael Dean, 1986) is not a book about gardening, even if bookstores insisted on categorizing it with other books about horticultural matters. And, The Perfect Order of Things (Gilmour, 2011) is not about housekeeping.

Although in my academic writing, I see mostly long titles, the ones with colons, personally I really love short titles because of their demands on verbal economy. My most detested title (eight grade-school versions of the same story) was My Christmas Holidays (closely followed by My Summer Vacation). As the child of newly immigrated parents growing up in the 1960s, I experienced Christmas differently from my classmates. I stumbled in painful embarrassment through how to describe our traditional ham using the vocabulary of a Canadian turkey, and debated how I could repostion potica as Christmas fruitcake. Only recently has the Pope come to my rescue with potica, when he asked Melania Trump if she made the pastry for her president husband.

I agonize over titles, so there are no favourites. They are all wisps of possibilities until something finally feels right. I wonder if Jane Austen felt compelled to change her title because of a similar consideration. Perhaps First Impressions just did not feel right.

Some of my favourite titles (and also the content that follows) come from the work of Toronto writer Carole Giangrande: A Gardener on the Moon (2010), Here Comes the Dreamer (2015) or All that is Solid Melts into Air (2017). Carole is among the very talented authors who really know how to craft evocative titles.

As an academic, I have a variety of research interests. My next book, due in 2018 with an Italian publisher, returns to Tuscany, to Mario Pratesi, and considers his long lost final manuscript, which I found in my archival investigations. For this title, I had a bit of respite from title-inventing, and simply appropriated his original Italian title.

Anne Urbancic is Mary Rowell Jackman Professor of Humanities at Victoria College (University of Toronto). Along with Earle Toppings himself, her project collaborators are the Northrop Frye Centre Undergraduate Fellows of 2015/16. She lives in Toronto.

Literary Titans Revisited: The Earle Toppings Interviews with CanLit Poets and Writers of the Sixties

Unearthed recordings reveal the early days of the literary powerhouses who gave birth to CanLit in the 1960s.

From 1969 to 1970, radio interviewer Earle Toppings recorded sixteen Canadian writers and poets who went on to become pillars of Canadian literature. These emerging icons of Canadian literature, including Margaret Laurence, Sinclair Ross, and Al Purdy, captured in Toppings’ interviews and readings, give intimate and compelling views of their developing prose and poetry, in their own words.

The Earle Toppings tapes provide a distinctive and special glimpse into the workshops of emerging CanLit authors, revealing their thoughts about writing, about their successes and failures, about their place in Canada and in Canadian literature. This written version of Toppings’ recordings presents exact transcripts of the spoken interviews, complemented by brief biographies and bibliographies. The interviews were carefully compiled by the inaugural group of four Northrop Frye Research Centre Undergraduate Fellows at Victoria College. This rare portrait would not have been complete without an interview of Mr. Toppings himself, sharing his personal recollections of the authors he recorded, and his own insight into their works.