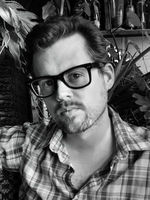 Jamie Sharpe's Dazzle Ships (ECW Press) uses as its title one of the most interesting historical examples of art and design being used creatively. Dazzle Ships, used mostly during the First World War, were military ships painted with geometric designs intended to visually confuse targeting by enemy weapons - an optical illusion brought to warfare.

It's a fascinating and appropriate title for a brainy, funny, wildly creative collection that investigates the intersection between art and authenticity. Like his previous collection, Animal Husbandry Today, Dazzle Ships showcases a a poet with a talent for crafting fresh, essential poems that balance wit with insightful emotional underpinnings.

We get to talk to Jamie today about his excellent title and the power of titles in general as part of our Entitled Interview series. He tells us about the artist whose work introduced him to the concept of dazzle ships, the (excellent!) title he doesn't remember coming up with, and shares some amazing titles by a favourite writer.

A few years back I was in Ottawa, hanging out at the National Gallery. There I encountered an Edward Wadsworth painting, Dazzle-ships in Drydock at Liverpool. 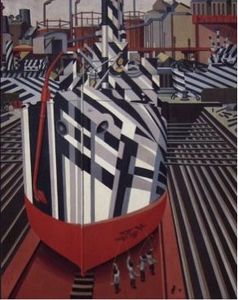 Dazzle camouflage is a historical oddity. The idea was to confuse those helming the periscopes on German u-boats by effectively turning US and UK ships into large op art/cubist canvases. Misdirection through the use of beautiful lines struck me as poetic.

I’m also a fan of Orchestral Manoeuvres in the Dark’s 1983 album, Dazzle Ships. That record was influenced by musique concrète—compositions created outside normal instrumentation and music theory—which is analogous to how I sometimes write. (This might just be a way of saying my poems aren’t always poetic and rarely scan.)

The reader grants the large font, bold faced title extra weight. As such, there’s pressure on a writer to make the most of their lead here. But the functions a title can fulfill aren’t that different than those of a second line in a poem’s third stanza.

I frequently approach titles as a kind of amuse-bouche, which (hopefully) builds anticipation for the course to come.

Early in their composition, all three of my poetry collections were originally titled, Works on Paper. That seems the most factual description of my writing, especially given how rarely I do public readings.

The poems I compose are singular, in that they’re not conceived within the framework of a larger manuscript. This becomes a problem when someone, like a publisher looking to make marketing copy, asks, What’s the book about? I then have to sift through the work, trying to group and name what preoccupations prompted the words.

With this book I saw a lot of art as artifice in the material, so went with Dazzle Ships. But I could have just as easily called it Jazz Hands. No, that’s a terrible title.

“When Nancy Reagan Recommends the Crab Salad”, from Animal Husbandry Today, if only because I have no recollection writing it. It makes me feel like a forgetful magician entertained by his own trick, as he no longer knows how it was performed.

Richard Brautigan was good at naming his novels (Trout Fishing in America; In Watermelon Sugar), poetry collections (All Watched Over by Machines of Loving Grace; The Pill Versus the Springhill Mine Disaster), and individual poems (“Your Necklace Is Leaking”; “Hey, Bacon!”).

I’ve become a little behind in my work; it’s time for me to finally sit down and write my juvenilia.

Jamie Sharpe is the author of Animal Husbandry Today and Cut-up Apologetic. He lives in Comox, B.C.

Poems that challenge the depths of perception

Dazzle camouflage, at the beginning of the 20th century, was an attempt to answer the question, How do we hide those things that are too big to hide? Ships, often containing thousands of soldiers, were done up in a confusing array of lines to perplex and distort the viewer’s perspective (in this case, German submarines). “Razzle dazzle” was art attempting to hide life.

Jamie Sharpe’s Dazzle Ships is also concerned with art’s relationship to life. It questions how we build poems from the material of mass culture. And in asking whether authentic modes of expression can be found in an increasingly automated world, Sharpe creates a poetry that is at once as disturbing as it is hilarious and as deeply profound as it is subtle.