I always come back to baseball. As subject, I mean. Each time I think I'm done writing about it, or that I'd be better off focusing exclusively on the production of fiction, something occurs on a green diamond somewhere, or a trading card memory beckons, and before I know it I'm banging out a thousand words on the matter. This is not meant as complaint. I kept coming back to writing about baseball and after a few years I had enough material for a book of which I am extremely proud. It might ultimately be a trifling thing, this game, but it is a pleasing trifle.

I could write about baseball for the next hundred years and probably not tire of it. It's an inexhaustible vein of inspiration. There's just always something. Its inspirations stem from many things, not the least of which is its native lexicon, the playful and arcane language which has grown up around and within it. A can of corn is an easy fly ball. A Baltimore chop is a ball that bounces near home plate and bounds high up into the air, giving the batter a good chance to reach base on what looks like a piddly little infield hit. Once, while watching a Youtube-archived Brooklyn Dodgers game (my favourite way to pass the long, cold winter), I heard play-by-play man Red Barber describe a close contest by saying “This game is tighter than a new pair of shoes.” I find it impossible not to be drawn to such colloquial and casually inventive argot.

But the precious deposit runs deeper than words. There's something in the game's complexity and longevity that feels to me like fertility. It braids together history, social currents, our relationship with developing technologies, myth-like narrative, aesthetic perfection, and the simplified dualistic dynamic of team vs. team and person vs. person in a way that taps directly back into our trusty old lizard brains. It's just so full of stories.

Life is messy, and chaotic, and random, and infuriating. It resists almost all my efforts to impose order upon it. So I find comfort in some small representation of order. I turn on the game and I open a notebook and I improvise a scorecard, in pencil or pen, with crooked lines. It helps me make a little sense of things, if only for nine innings. I keep meaning to buy a ring bound book of blank scorecards at Canadian Tire, but I never get around to it. I could photocopy or print one from the internet, I know, but damn it if my printer's not always out of ink, and besides all of this would suggest some measure of forethought, of which I am generally incapable. But with my hand drawn job I make an account of the game that makes sense to me, and a kind of calm descends, the peace of nearly understanding a thing which, while temporary, can make me feel like life is a manageable enterprise. 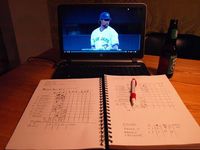 The resulting pages are heavily scribbled, and if I've used pen there's usually a good deal of smudging (I'm a lefty), but a record exists. The next morning, in those crowded pages of numbers and lines, abbreviations and codes, I find I have something to write about, a story preserved in a shorthand peculiar to my favourite game that needs only to be translated to become something, hopefully, worth reading.

The season is long and eventful, which is to say full of material. Yesterday afternoon in Texas, you may have heard, national hero José Bautista slid hard into second base, and the Rangers' Rougned Odor took exception, shoving Bautista, then punching him in the jaw. The crowd chanted “U-S-A!” The immediate cause was Bautista's having been hit in the ribs with a pitch, the more longterm cause of all the excitement were the events of last year's playoffs which culminated in Bautista's infamous bat flip. Those few moments of game time on a Sunday afternoon in May contained countless tendrils that reach back not only to October of last year, but back to the events and traditions – a century and a half of them – which shaped baseball's culture and unwritten codes. There is, in other words, a lot to pull apart. I hadn't intended to write about “The Punch” (which is itself just the less-satisfying sequel to “The Bat Flip”), but once I wrap up this blog post there's still a whole afternoon in front of me, so who knows?

The world needs more words about a game like it needs another hole in the ozone layer, but doing the practical thing has never really been my hallmark. I'm kind of subject to the whims of my heart much of the time. Baseball's appeal is a Siren's call for me. I mean to be headed for the spot on the map marked Literary Fiction, but I keep taking frequent side trips to ballparks. Maybe it's slowing my progress, this habit of churning out thousands and thousands of words about men who throw balls and swing bats, but I can't see it changing. They'll play a hundred and sixty-two games this season, and then they'll do it again next season, and so on. I might try to resist the temptation to find subjects within all those games, to train all my efforts on producing something more lasting or “important,” but I don't like my chances.

Andrew Forbes’s work has been nominated for the Journey Prize, and has appeared in The Feathertale Review, Found Press, PRISM International, The New Quarterly, Scrivener Creative Review, This Magazine, Hobart, The Puritan, All Lit Up, The Classical, and Vice Sports. He is the author of What You Need, a collection of fiction, and The Utility of Boredom: Baseball Essays. He lives in Peterborough, Ontario.