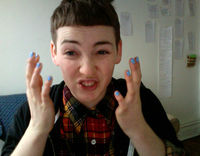 Georgia Webber is the artist and author behind Dumb, a comic book series about her severe vocal injury and ongoing (often silent) recovery. Her comics have appeared in Taddle Creek, Matrix, Descant, and Irene 4. Georgia is also the Comics Editor for carte blanche, Distribution and Marketing Director at Paper Pusher and Papirmass and even the Guest Services Coordinator for the Toronto Comic Arts Festival. She does a lot of stuff in the world of books and comics; every day she's comic-hustling.

The same as my favourite comic book right now: Calvin & Hobbes. I bought every compendium and even photocopied strips that I loved so I could put them on my walls and read them every day. Bill Watterson is still my number one.

What was the name and general premise of the first comic book you ever made? (That is, when you were a kid, making comics for your siblings and/or friends?)

The first comic book I ever made was a collection of one-page comics about nothing. One was about my boyfriend at the time turning into an ostrich, another was about a Nature Valley Crunch bar doing crunches, another was about how old people look. It was perfect nonsense – I loved every minute.

I say it all the time, but I'm not exaggerating in the slightest: TCAF changes my life for the better every single year. It's not possible to pick favourites. I've been involved since 2008, and there has not been a festival since that didn't blow up my entire world and reassemble it with a huge dose of excitement, creativity, friends, and genuine discovery. I'm looking forward to whatever amazing thing is coming this year, and I wouldn't dare guess what it may be. 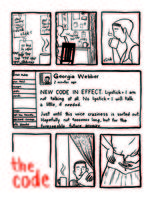 Okay. I just lost an hour trying to narrow the list down from 150 or so creators to just one, so I need to move on to the next question for fear of never finishing.

The hardest thing is distinguishing between writing and drawing, but also between drawing and design, and between design and layout, and between layout and writing … but this is why comics rule. Oh, and any kind of perspective or accuracy is pretty impossible as far as I'm concerned.

Dumb #4 is a bit of a departure for the series, artistically, as you make use of collage. What led to that choice?

I experiment with every story in Dumb, trying to do something different each time. This time, I was trying to convey how confused I was about this feminist question that was nagging at me, and I couldn't think of a better way to convey the confusion than to overwhelm the reader with the same vague concepts and strong imagery that was in my head. Plus, Julie Doucet is a basically responsible for me breaking into comics, and her story really works with the subject matter; the collages are an homage to her current work, post-comics, which is far better than anything I am capable of right now. 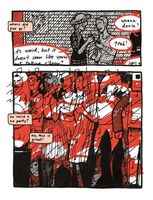 What challenges are there for you at a festival like TCAF, given your long-term vocal injuries? It seems like festivals would involve a lot of talking.

It's difficult to imagine talking and then not talking, switching back and forth constantly in a space like TCAF and at all the events, but I have to do it so that I can enjoy the festival without pain. On the library floor, I will be wearing my lipstick (code for resting my voice) but whenever I can, I'll speak to people at smaller gatherings. Can't stop the fun just 'cause I can't laugh out loud.

Three issues of Dumb have been available before TCAF. What’s the reaction been like from total strangers? And how does it differ from friends' reactions? Have you encountered anyone else who's had a similar injury?

The reactions from all parties have been really lovely. Creative work is easy to get insecure about. I consider my work to be successful if only because of the reactions I get from others who have experienced long-term injuries. They haven't lost use of their voices, but they recognize the experience of pain, internal negotiations, and how isolating injury can be. I know I'm doing something right by showing them they're not alone. Even people who aren't dealing with injury have commented that they see themselves in what I draw, and that's just … incredible.

Visit torontocomics.com to find out more about TCAF and Georgia Webber's appearance at the festival. She's also part of a special comics event called 'I Put a Spell on You' this Tuesday, May 6, a the Pilot Tavern (22 Cumberland Street)