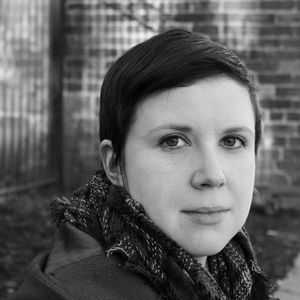 “You start to realize just how culturally constructed ideas of the edible vs. inedible are."

Among the themes poets tend to shy away from, gastronomy lives somewhere at the top alongside rent and debt. Food can be a hard topic to approach as what one enjoys eating is as subjective as what makes one laugh. All the more reason to read Catriona Wright’s debut, Table Manners, which is as much food ethnography as it is poetry collection; where dinner parties and dumpster diving share the same space as celebrity chefs and dirt eaters. With the keen focus of a Michelin Star chef, Wright probes not only the state of the modern foodie, but gives the reader an overall affect that gestures toward capitalist consumption and consumer’s entitlement to satisfaction.

At what point did you realize that you were going to write a book of poetry about food? Was it your intention from the beginning? Or did it start as a few poems that snowballed into Table Manners?

Food and food culture have always interested me, but I didn’t set out to write a book of poetry about food. About three years ago members of my poetry workshop pointed out that many of my stronger poems were about food in some way.  After that I was more deliberate about researching and thinking about my relationship to food and how food serves as a signifier of different identities. I read M.F.K Fisher, The Joy of Cooking, food blogs, menus, Yelp reviews, dumpster diver message boards, editorials about genetically modified food, etc. The original title of my collection was actually Raw. Cooked. Rotten., based on the anthropologist Claude Levi-Strauss’ theory of the culinary triangle. But, of course, food is a sensory experience rooted in cravings, longings, nostalgia, culture, religion, class, gender and morality among other things, so I always wanted to filter the research through specific emotional experiences and to focus heavily on the bodily experience of eating (or not eating). Reading the poem “Eating Fried Chicken” by the Vietnamese-American writer Linh Dinh was absolutely pivotal for me when writing my collection (https://www.poetryfoundation.org/poems/54624/eating-fried-chicken). I was aiming to achieve his masterful balance of contradictory responses to food.

Did you find that the intensive research and writing about food change your relationship to it? I'm thinking about how chefs are never hungry when they get home.

My eating habits themselves didn’t really change, but I became more aware of how food acts as a signifier of class, gender, education, etc. and more attuned to the cultural, historical, social, and political implications of my food choices. You start to realize just how culturally constructed ideas of the edible vs. inedible are and how something you think of as an individual choice or preference has actually been determined by all these external forces. Don’t get me wrong, though. I can still turn off my brain and feel pure joy when eating a Peanut Buster Parfait from Dairy Queen.

One poem from Table Manners I would like to discuss is "Mukbang," which is about South Korean websites viewers sign into to watch people binge eat. How did you discover this cultural phenomena? This poem stuck out for me because it represented a different relationship to food. Not one of gastronomical pleasure necessarily, but something more voyeuristic.

I first heard about this phenomenon when I was researching competitive eaters—in other words, watching YouTube videos of people consuming dozens of hotdogs—for another poem. Mukbang differs from competitive eating because the hosts (or Broadcast Jockeys) are eating at a leisurely pace, talking about the food, and interacting with the audience throughout via a live chat room.  I wondered what would compel people to watch live-streaming videos of someone binge eating. There are several potential motivations, but the one I focus on in the poem is the desire to connect with other people through eating. Communal eating helps people bond and build stronger relationships. The speaker in this poem is lonely and isolated, and watching these videos allows her to imagine that she has a family, specifically a daughter, to eat with. So yes, there is a voyeuristic aspect to watching these broadcasts, with some uncomfortable potentially sexual undertones, but I wanted to move past this explanation to emphasize a deeper, more fundamental yearning for community and family.

I'm a big fan of your chapbook press, Desert Pets. You have a very impressive roster of amazing books by authors like Jess Taylor, Jessica Bebenek, Stevie Howell and Jessie Jones, just to name a few. Can you tell me a bit about the founding of the press and what you look for in a good chapbook?

Thank you! I co-founded the press in 2015 with my friend Emma Dolan, who is a freelance cover designer. We’d talked about working together on a project for several years—I would serve as editor and she would be the designer—but it took us a while to stop procrastinating and to feel comfortable enough navigating the writing/publishing world to be able to make a meaningful contribution. We were also inspired by Odourless Press and Ferno House Press, both of which stopped publishing shortly before we started. It’s been wonderful to work with Emma because she is so talented, and I can always trust her to come up with surprising and beautiful designs.

Chapbooks are an exciting way to introduce new writers to a wider audience or a place for more established writers to test out new material. We’re one of the few Canadian chapbook presses to publish fiction as well as poetry. We’ve mostly solicited the chapbooks we’ve published, so I’m normally a fan of the writer’s work before I see a manuscript. I have varied tastes in poetry and prose, but I do tend to favour manuscripts that have a wide emotional range, that is, that refuse to settle into a predictable pattern or tone. I appreciate, but don’t require, some humour in the mix, as well

What are you working on at the moment? What can we expect from Desert Pets coming up?

I’m working on a collection of short stories, tentatively titled Difficult People, which is coming out with Nightwood Editions in 2018. Desert Pets will be publishing two new chapbooks this fall. Follow us @desertpetspress for more details!