“The Main Way I Saw Through his Codedness was Through my Own Experiences,” an Interview with Marc Di Saverio 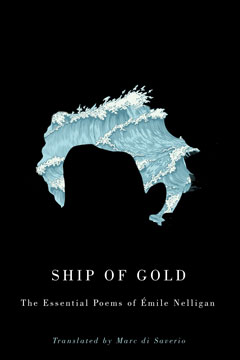 It’s all too easy, but also hard not to, mention Arthur Rimbaud when discussing Émile Nelligan, the late 19th century wunderkind of Quebecois poetry who published his first poems at 16, gaining much praise from the Montreal literary circle before disappearing at 19 after being committed by his parents to an asylum where he would spend the rest of his life. He embodied much of what we love of the young and talented. He was in touch with contemporary poetry, not just in Canada, but from France, having already read Baudelaire, Verlaine and Mallarme. The landscape his poems inhabited was not the quintessential Canadian wilderness, but the urban brick of Montreal. He was, as poet Marc Di Saverio, translator of the recently published Ship of Gold, the Essential Poems of Émile Nelligan, points out, “the first modern poet who wrote in Canada.” I wanted to ask Marc more about his connection to Nelligan, the difficulties of translating, and his own poetry.

In your afterword to Ship of Gold you write that you began translating Nelligan’s poems in an effort to get over writer's block. But do you remember how you first encountered his poems and what your initial impressions were, what drew you to them?

Yes, at the time I was feeling a proto-palpable lonesomeness -- it was 2002 or 2003 -- gallivanting through Westdale, with my headphones on, listening to My Bloody Valentine's Loveless, eventually entering the Mills Memorial Library, at McMaster, feeling a great sense of hopelessness for Canadian Poetry -- and discouragement in the face of unknowing how to break my writer's block. I had been planning to learn more about Quebecois poetry that day, hoping to find a kindred poet among them -- I had not yet found a kindred Canadian poet writing in English -- and I did. I discovered a soul mate, that day: Emile Nelligan. Reading through his collected oeuvre I was so overwhelmed with the similarities in our styles and techniques, overwhelmed by the similarities in our biographies, both of us being institutionalized at the age of 19, for severe mental illnesses. Immediately, I translated Ship of Gold, over the next 3 days, returning to the library, also, to explore, further, Nelligan's prior translators. I had finally discovered the first modern poet who wrote in Canada. After the three days, I shared my translation of Le VAISSEAU D'OR, with my brother, Paul, in the evening:

She was a massive ship, hewn in heavy gold,
with masts that fingered heaven, on seas unknown;
under redundant sun, with scattered hair,
was prowed outspread Venus, bare.
But then one night she hit the huge reef
in waters where the Siren sings,
and this ghastly shipwreck tilted its keel
to the depths of the chasm, that immutable
tomb. She was a ship of gold, but her diaphanous
flanks showed treasures over which the blasphemous
sailors Spite and Nausea and Madness clashed.

So, what has survived this flash of storm?
What about my heart, abandoned ship?
O, still it sinks, deep in Dream's abyss!...

I went to bed that night feeling like I had finally met a kindred Canadian poet, who could join the other kindred dead poets of yore who seemed to live in me, like Leopardi, and Pound, and Plath.

In the past you've spoken about your own work and it's connection to mental health. What is it about poetry that appeals to you when exploring mental health issues?

Yes, James, I have definitely spoken about my work and its connection to mental health.  I think that a lot of my experiences with mental illness are ugly, and it is refreshing for me to be able to express such ugliness through such a beautiful method: Poetry.  I tend toward using all the elements of poetry to further create intensity and tension between the subject matter and the Poetry.  I like to keep the poetry itself as beautiful as possible, when I discuss uglinesses of madness, so as to also make the subject matter more digestible, even pleasantly digestible.

At the time Nelligan was writing, there was no public discussion about mental health, yet you point out that he was a forerunner of confessional poetry--writing about suicide and neurosis. But he did so in a very coded way, not openly expressing the themes of his poems directly like, "this poem is about my breakdown." I'm wondering how you began to see these themes in his writing.

One of the first Nelligan poems I read was "Nocturnal Confession," which, for me, kind of IS a "this poem is about my breakdown" poem:

"It would be sweet to hang under this tree.
Priest, pray for me! in the city it's night."

There are other examples I also consider to be direct talk of break-dowon, but, certainly, MOST of Nelligan's cries for help ARE indeed coded. The main way I saw through his codedness was through my own experiences, which often reflected Nelligan's.  Because I have suffered many bouts of what doctor’s would call manic-depression, I can more easily see through his veils, and crack his codes. Because I've "been there," so to speak, and I, too, have written in code, especially in my earliest, more bashful verses, it is easier for me to see through his codes.

When coding poetry, is there danger of loss of meaning and then alienating readers? Is this something poets should consider?

Yes, there is definitely a great danger of loss of meaning and the alienation of readers, and yes, poets should consider this, deeply.  When I started as a poet, I believed in Art for Art's sake, but, the more and more I realized that humanity was -- and is -- in an emergency state, the more I realized it was most ethical to create an Art for Humanity’s sake, an art that could, if executed properly, not only have the artistic integrity of Art for Art's sake period poetry and art, but be the guiding voices of humanity, guiding voices that might deliver, or help deliver humanity from its emergency present, and into a future of spiritual, bodily, and mental prosperity.  The poet, more than ever, must keep the reader in mind.  We are living in a time when art must not just reflect the world, but change it entirely. The world needs poets more than ever before, and needs poets to be clearer than ever before, yet, still, maintaining the beauty and grace of the “classic” great poem.

How did you make that change in yourself? Was it a change in subject, accessibility?

I would say that I am still in the process of evolving toward being a more accessible poet, which, for me, cannot happen overnight, since I think it is essential to maintain the level of beauty of Art for Art Sake's poetry, since, without a work being beautiful, it will be ignored by people, even if the poetry does concern them and their futures.  Musicality, the blood force of a poem, must always also be present in any poetry...Yes, James, often a change in subject and accessibility.

You're know as being a very powerful, invocative live reader, something else you have in common with Nelligan, whose poetry also has a high musical quality. When writing, is there a music are hearing? For you what is the connection between poetry and music?

Yes, when I am writing poetry, I DO indeed hear melodies for the words I write, as I write them.  Sometimes I even sing these melodies as I write, and, most recently, I have been including some of the melodies in my recitals, half reciting, and half-singing, many of my works, though this is a new development in my reciting; it has taken me a long time to evolve toward singing my poems, which I think is risky, but, if done rightly, can be very impactful...As for the connection between poetry and music: music is the very blood of a poem, without which, poetry is dead.  Without musicality, a poem is never born, only conceived.  Some poems are born but do not survive in the reader's mind because there is not enough musicality to sustain its life therein.  Musicality is to poetry as paint is to painting.

What do you do visually, on the page, to covey the musicality of a poem? Is the shape of the poem important to you?

Interesting you mention this, James, since Logopoeia is very important to me, however, I have not yet come to the point where I use the shape of the poem to convey musicality, which I really should, so I really appreciate this epiphany-inducing question.  The truth is that my desire for attractive shapes of poems is more to do with visual aesthetics, alone, rather than visual aesthetics interacting with the meaning or feeling of the poem.

When translating poetry, what is most important to you? What are you trying to preserve of the original work?

In the 2000's, I sent some translations to Maisonneuve Magazine, in Montreal.  Derek Webster, the editor-in-chief, wrote me: "Marc, some of your Rimbaud translations are perhaps better than the originals."  Because I so respected Maisonneuve – and still do -- I took Derek’s observation, or opinion, to heart, very much. Since then, the most important thing to me, when translating, is not to just replicate the original meaning and format of a poem, but to replicate, and even go BEYOND the original QUALITY, the original greatness, of a poem.

Are there other translators, or particular translations that you admire?

I admire Ezra Pound, especially his book Cathay; I love his translations of especially the Chinese poets.  As a neophyte I adored Louise Varese, who was the first to translate Arthur Rimbaud's Illuminations. Auden's and Lowell's translations appeal to me.  To be honest, there are few English Language translators who have really inspired me, or gained my admiration.  The art of translating was always one that I discovered alone, without much outside influence on my style of translating, which I am happy about.  In terms of writing original poetry, I am more likely to be influenced by the poets I love.  I don't get as excited when pondering the art of poetry translation as I do when pondering the art of poetry.