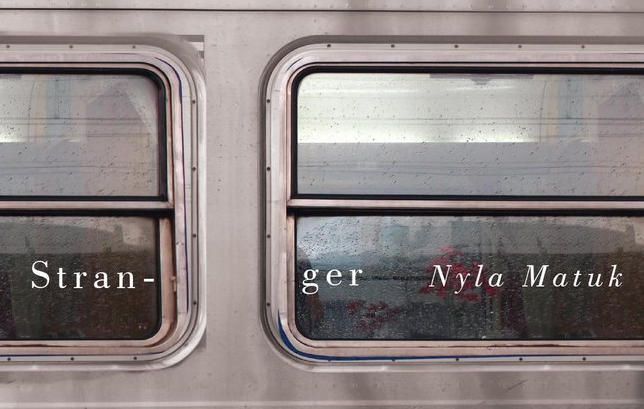 Searching for the root of modern identity, Nyla Matuk’s Stranger (Signal Editions, 2016) is as much cultural critique as it is confessional. Matuk questions the divisions we make between private and public with wide-angle-focused poems of how we place ourselves in society alongside close-ups of personal history. Using a subtle, intellectual language, Stranger is a hunt for what it means to be an individual within a larger group and how that group can come to see itself as a community.

Your latest collection, Stranger, begins with an epigraph from the psychoanalyst Adam Phillips, a writer whom you also referenced in another interview with Linda Besner. Phillips, in the same piece you talk about with Besner, mentions that one of the first experiences that drew him to psychology was reading Freud, who, he says, "seemed to me a version of the Jewish family life that I knew." I'm curious if there was a similar initial draw for you to poetry: something that resembled a version of life that you recognized and connected with, something familiar that drew you in.

There was something both similar to poetry and anathema to it, growing up. Both familiar and unfamiliar. Childhood was disjointed and chaotic, filled with ruptures and about-faces and instability. In that sense, the sense of interruption or non-existent narration, and novel or unusual alliances—much like metaphorical thinking—it seems writing poetry is a natural form of expression for me. In addition, there wasn’t anything happening that was particularly conventional or traditional. On the other hand, I didn’t grow up in a family of great discursive, literary or scholarly interests. There was a pragmatic attitude toward everything--definitely not conducive to poetry. I think Phillips might have felt he was joining a kind of conversation, in reading Freud. I don’t feel I’m doing that.

If not joining a conversation with family, were you joining another, larger conversation, one outside of tradition? I ask because much of Stranger seems to question identity, showing a process of discovery and a shaky ground for permanent self—and I wonder about what role poetry has played for you at this point in your life, how it has become part of your identity.

I think the concept of ‘identity’ is having a significant moment in our political and cultural expression right now. Politically, identity has taken precedence over other ways of finding moral worth, such as the belief in statehood. ‘Nation’ has replaced statehood as a locus of valuation on the left, for instance. My relationship to identity in this political sense holds, though I do question it; for instance, in “I Declared My Ethnicity,” I am not saying identity is unimportant, but expressing it can be a fraught business these days…. I do think the permission we’re given to be playful in poetry appeals to me more than writing a straight-up essay full of argumentation and rhetorical burn, and I would say for that reason, practically in and of itself, poetry plays a tremendously important role in my identity. Going back to the book’s epigraph, by Adam Phillips, I’d say my interest in unknowingness—in the upkeep of a certain appetite for not knowing, as he expressed it—is an allegory for writing poems. So maybe it’s an identity of not knowing, of estrangement. This isn’t an overly surprising outcome as an artistic agenda, for me, because I come from an ethnically diverse background.

That said, I wasn’t really thinking of my own identity at all when I began to conceptualize Stranger. I’d been thinking about living online: tweets, posts, shares. About the disembodied quality of those expressions, and about the pure faith associated with them: like the recurrent figure of the nightingale in many Romantic poets’ works, sending out a song to keep itself company in solitude. Do we send out these online signals to seem less like strangers to others, or to cheer ourselves in our actual solitude?

Identity and the self seem like precarious concepts nowadays, especially since new research is starting to question the validity of our own memory. If we can't trust our own memory, our own personal history, what do we really know of ourselves? Social media seems like a comforting way to prove to others as much as to ourselves a personal history, a timeline. I know I did this and so-and-so was there and everyone else knows this too, just look.

Do you think social media is inevitably the song to our lonely nightingale, or do these expressions offer a possible exit for loneliness by controlling one’s own identity?

I suspect social media are different things to different people; certainly a way to alleviate loneliness or to construct a persona, share sentiments, political opinions, etc. All good. It’s the aspect of sending out all this stuff, not necessarily directed to any one person, or at least, not ostensibly—there are always subtweets, and so on—that interests me. This depersonalization--the manufacture or imagining of an audience, I could call it. But asking what we know of ourselves is a good question: and what the researcher you mention above has to say makes sense to me, at least personally. My memory is pretty unreliable often enough (certainly about names and faces). Whether posting a photo on Instagram to remember a particular event will help me to remember that event more vividly in future…is possible. I’m not sure identity is so precarious these days on the surface, actually: it seems as I said, entrenched politically and not only for the oppressed.

Going back to "I Declared My Ethnicity," the poem begins by showing us some moments of public spectacle. ("With gloves, on a stage, they made a man of it"; "Tense developments during some performances. As characters / fly up and down the stairwell, gowns flutter and fall.")  What kind of role do you think performance or spectacle plays in identity? And how is identity entrenched politically?

Performance, spectacle, and identity….that’s a tall order probably better tackled by Roland Barthes…but, I don’t see performance at all missing from the declaration of one’s identity, whether with respect to ethnicity, sexual orientation, or some other marker. What gets expressed can be unique or stuck in cliché—it probably depends on one’s personality. But one can’t help what one is, and if the dominant narrative doesn’t allow opportunities for the cultural expression of that identity, then of course we might end up with a politically fraught situation for any number of marginal identities. Of course, it would be naïve to say the reality for many identities is marginalized strictly as a result of a lack of opportunities for cultural expression. The reality is far worse. In my case, the expression of, or fact of, being of Palestinian ethnic origin is charged politically by virtue of my—or indeed non-Palestinians’--standing up for social justice for Palestinians while Western governments aid and abet an ethnocratic project of settler-colonialism that is also hastening the ethnic cleansing of the Palestinian people from their homeland. It’s similar to the ongoing Canadian and American incursions on indigenous people in North America. A good analysis of the similarities and differences is found in Steven Salaita’s excellent study published this year, Inter/Nationalism: Decolonizing Native America and Palestine which includes a chapter on poetry.

In terms of your own history, how has your approach to writing poetry changed over the years? Is ethnicity, identity or politics something that consciously informs your work?

Sometimes these things consciously inform my work, often not; but if readers pick up certain interpretive gambits, it wouldn’t surprise me. It is after all a more autobiographical book than the last. My approach hasn’t changed in a way I've noticed myself: it wavers between a preoccupation with meanings I find in the sound of language, and the sense of concept, but if I say more, I’d be self-editorializing.