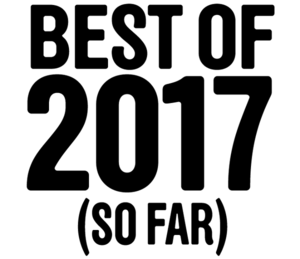 The end of the year is predictably a time for reviewing, taking stock, and of course, lots and lots of best of lists. In the world of books, there are some pretty obvious picks—award winners, best sellers, and general crowd pleasers. (You’ll see, for example, both here and elsewhere, that David Chariandy’s deservedly lauded Brother shows up again and again, and that Michael Redhill’s Giller Award-winning novel Bellevue Square is currently pretty much everywhere.)

But we all know that reading is an incredibly subjective, deeply personal experience, and that some real gems can get easily missed in the seasonal onslaught of new releases and coveted accolades. In that vein, Open Book Ontario asked a group of prominent authors and critics what books they cared about, thought were important, or that meant a lot to them in 2017.

There were no real parameters or restrictions—only that their picks were well loved and, in their opinion, deserved broad reader attention.  Here’s what they had to say, and the 2017 books they decided to celebrate:

What Can You Do by Cynthia Flood (Biblioasis) is a deceptively tiny book, full of brief, intense stories that cut to the heart of perfectly imagined, deeply specific human interactions. An older couple mourns the changes in their marriage, their son, and a campsite they haven't visited in many years. A mother struggles to know how to understand the stories her child tells. A boy marvels at the wonder that is a horse. This collection is a jewel-box, and a joy.

Rebecca Rosenblum is the author of two short-story collections and the novel So Much Love (McClelland & Stewart.)

I loved David Chariandy’s book Brother (McClelland & Stewart.) It’s a beautifully written novel about family, what it means to love and to be loved, what it means to want a better life and what it means to disappear inside those hopes and possibilities. The novel is set in an immigrant neighborhood and sheds light on the lives of all of those that are striving for something beyond their circumstances and in doing so, does what art should do, and shows us who we are. I am sure that it is destined to be a Canadian classic.

Gurjinder Basran is the award winning author of Everything Was Good-bye and Someone You Love is Gone (Viking.)

My favourite book this year was Precious Energy by Shannon Bramer (Book Thug.) These poems are deadly serious and wildly whimsical, deeply domestic and linguistically fancy-free. They shine with a pathos so bright it gleams. I raced through the book and started again at the beginning.  Highly recommended for poetry lovers and all human beings.

Alison Pick is the author of the novel Strangers With the Same Dream (Knopf Canada.)

Sorry to Disrupt the Peace by Patty Yumi Cottrell (McSweeney's.) For me “best” describes books that are not only well-written, but books that are pushing boundaries—books that leave me questioning the way I read and what I read, while pulling me through a strong narrative. Sorry to Disrupt the Peace is a prickly read, told from the perspective of Helen Moran, a young woman who returns home to the family who raised her after her adopted brother commits suicide. The story is not what you expect. Helen Moran made me uncomfortable at times, but she also made me laugh, and I love a book and a character that can do that. This book is for readers who love the unusual. It will not disappoint in that regard. It is special in a way that’s hard to describe. But you’ll know just what I mean when you read it.

When We Were Alone by David Alex Richardson (HighWater Press) is one of the most captivating children’s books I have ever read. In just a few pages, it captures the beauty and resilience of Indigenous children living in the residential school system with prose that is lovely and magical and heartbreaking all at once. It is a rare treasure to find a kid’s book that is as meaningful and wonderful for children as it is for adults. When We Were Alone had my eight-year old captivated and left me fighting back tears. It is a must-read, a touching book that I will forever treasure.

Ghachar Ghochar by Vivek Shanbhag (Penguin.) This year, I discovered “sweet spot fiction”—books with fascinating plots, told at a speed and pace that’s fast and richly worthwhile. I loved every sentence and every word of this novella translation, which delves into issues of class through a adult protagonist struggling to find his own way when his family goes from middle class to upper class after his uncle starts a successful and lucrative spice company. Ghachar Ghochar (a made up term that means all-tangled up) is about the impact of “new money” and the lengths people will go to protect their status and their place. In just over 100 pages, this novella gives readers all the range of emotions found in novels three times its size.

Jael Richardson is the author of The Stone Thrower (Anansi,) the founder and artistic director of the Festival of Literary Diversity, and a book columnist on CBC’s q.

My favorite novel so far this year is David Chariandy's Brother. But it's had a lot of love already, so I'll single out instead a short book of non-fiction, Naben Ruthnum's Curry: Eating, Reading, and Race (Coach House Books). The book is a lover's quarrel with, if not necessarily against, what Ruthnum memorably calls “curry books,” South Asian diasporic fiction and non-fiction that has become a genre, with its own set of sometimes tired conventions. Besides the sharp prose, I liked Ruthnum’s repeated point that South Asian writers and readers have themselves helped to restrict the kinds of stories that get told about them. Colonialism and racism played their part, and Ruthnum knows and says that, but his version struck me as new, honest, and vital. I'm still thinking about it, and I've been pushing it on other teachers and students ever since.

Nick Mount teaches Canadian literature at the University of Toronto. He is the author of Arrival: The Story of CanLit (Anansi.)

Witches, Sluts, Feminists: Conjuring the Sex Positive, by Kristen J. Sollee (Stone Bridge Press.) In these ruptured times, with the female body under attack in so many ways, the witch is having a timely resurgence. Sollee elegantly weaves together the stories of witches, sluts, and feminists, drawing on history, sociology, and interviews to create a potent book about the weight of names and titles, and the sheer strength of women in groups. It's a thought-provoking examination of gendered persecution over the years, and how, throughout it all, the coven of nasty women has held fast.

Anna Maxymiw's debut book, The Lodge, will be published with McClelland & Stewart in 2019.

Savage Theories, by Pola Oloixarac (Translated by Roy Kesey.) This book is incredible—wild, hilarious, brilliant, dense, confusing. I really liked it, though one read only really skims the surface.

Brother, by David Chariandy. Short, terse and tense novel about two brothers growing up in a Scarborough housing project. Devastating and excellent.

Mrs. Caliban, by Rachel Ingalls (New Directions.) Reissue of a 1983 novel that was mostly ignored until the British Book Marketing Council picked it as one of the 20 best post-war American novels. The less you know, the better, so I'll say little else about it other than a very, very enthusiastic recommendation.

Dear Cyborgs, by Eugene Lim (FSG Originals.) A wild, inventive novel about, among other things, some superheroes in the future discussing Occupy and other early 20th century protest movements; also it's a coming-of-age novel about two Asian-American kids in the Midwest. Kind of. Fun and smart.

The Nightingale Won't Let You Sleep, by Steven Heighton (Hamish Hamilton.) A straight-ahead, realist novel set in a dead zone between Greek and Turkish Cyprus that made me realize how hard this sort of thing is to do well—and Steve crushes it!

Pasha Malla is the author of Fugue States (Knopf Canada.) 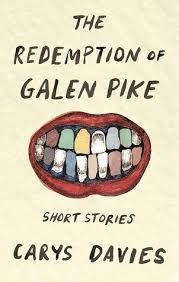 The Redemption of Galen Pike, by Carys Davies (Biblioasis.) Welsh writer Carys Davies has produced what is by some measure the best collection of short fiction I've read this year. From her opening salvo – appropriately titled "The Quiet" – Davies relies on ellipses and silences to convey meaning, paring her stories down to their barest essentials. More than just a talented minimalist, Davies is a master of deflection and reversal. These stories creep up on you and work their way under your skin.

A Queer Love story: The Letters of Jane Rule and Rick Bebout, Marilyn R. Schuster, ed. (UBC Press.) Novelist Jane Rule and activist/publisher Rick Bébout maintained a long and deep correspondence, covering everything from identity politics to pornography to censorship to the AIDS crisis of the 1980s. This volume of letters, which spans the years 1981 through 1995, presents Rule and Bébout as passionate, cantankerous, argumentative, and profoundly devoted to one another. This generous volume is both a snapshot of a momentous time in Canada's queer community, and a testament to the lost art of letter writing.