Throughout the process of distributing ten bins of books, chapbooks and other literary materials once owned by Ottawa poet Jane Jordan (1926-2007), there’s a slight guilt attached to dismantling her poetry library; aware of just how much her collection holds a portrait of the late poet, reading series organizer and supporter of so many in her immediate community.

In early 2015, John White contacted us through our Chaudiere Books email address to offer us her mother’s library. “I want the books to go to poets,” he told us. Over a period of weeks, he delivered ten large bins of books, journals, chapbooks and flyers, including a bin overflowing with her manuscripts and press clippings (all of which bathed in a lingering and stale cigarette smoke). It was an enormous task to sort through the materials to try to make sense of it (in which we hosted two book give-away parties), one that has taken months, amid toddler and now, newborn, to see through to the end.

Jane Jordan was a legendary figure in Ottawa literary circles, being revered by a great number of people around the Sasquatch Reading Series, the Orion Series and The TREE Reading Series (the first two of which are defunct). I most likely first encountered her through one of those series somewhere in the early 1990s, but it would be years before I understood that she was one of the first (if not the first) to organize an official reading series in Ottawa, hosting events through Pestelozzi College on Rideau Street (Ottawa’s contemporary to Toronto’s Rochdale) in the early 1970s. I discovered only recently that it was this series that morphed into the on-again, off-again Sasquatch Reading Series when she handed the reins over to Juan, then known as John, O’Neill in 1982. The series managed to last another three decades, until finally folding a couple of years back. 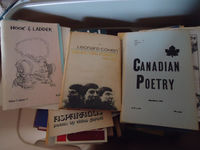 As the story goes, Jane White was involved with a variety of Toronto poetry circles (such as those around Poetry Toronto, a monthly poetry and listings publication that would later influence the creation of Sparks magazine; and even later, the monthly publication Bywords) throughout the 1960s, relocating to Ottawa around the onset of the 1970s with her husband and four children. She couldn’t find in Ottawa what she had left behind in Toronto, so, utilizing her maiden name for her literary endeavours, she began organizing a regular poetry series at Pestelozzi. She also continued to publish her poems in small literary journals, and even produced a small handful of chapbooks and books.

When moving through her collection, some of the first names to spark were the fairly obvious, including Al Purdy, Ted Plantos, Margaret Atwood, Milton Acorn, Eli Mandel, Irving Layton, Ralph Gustafson and Leonard Cohen. Beyond that comes an impressively thorough list of signed titles by numerous Ottawa-area authors, more than half of whom are either long passed, or have simply stopped publishing: Juan O’Neill, Marty Flomen, Robert Craig (poet and co-editor/co-publisher of publications such as Sparks magazine and Ottawa Poetry News), William Hawkins, Margaret Dyment, Harry Howith, Chris Faiers, Frank M. Tierney, Ian Young, Robin Mathews, Seymour Mayne, George Johnston, Enid Rutland, Marty Flomen, Heather Ferguson, Patrick White, Stephanie Bolster, Diana Brebner, Dennis Tourbin, John Bart Gerald, Gwendolyn Guth and Henry Beissel. What becomes fascinating through this collection is the portrait not only of Jordan herself, but of a time period in Ottawa writing that has rarely, if at all, been discussed. I don’t think I’ve ever seen so many books by Cyril Dabydeen. There is Concha and Rezanov (Anthos, 1987), a poetry collection by Ottawa’s first poet laureate, the late Catherine Ahearn. Some authors had mounds of titles included in the bins; some authors even managed multiple copies of the same titles. For some reason, her collection included, for example, three copies of Ted Plantos’ the seasons are my SACRAMENTS (1972), and three copies of William Hawkins’ The Madman’s War (S.A.W. Publications, 1974). There are further names on mounds of chapbooks and pamphlets, far too numerous to list, most I’ve never even heard of.

There are copies of Montreal Writers’ Forum, circa 1979, and The Canadian Poetry Annual 1976 (Press Porcepic Ltd). There are copies of Canadian Poetry from throughout the 1960s; there are numerous publications from York University, suggesting her connection with such before she left town, including Knautical Translations (spring 1970), edited by Eli Mandel and produced as “The York Literary Series No. 2.” There are poetry pamphlets by Shaunt Basmajian, Susan McMaster, Alex McCartney, Maureen Glaude and Rob MacLeod, and a couple of her own as well. There is a copy of Toronto’s Village Bookstore’s Catalogue of Contemporary Canadian Poetry (undated). 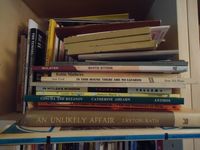 There are notebooks, journals, clippings, diaries, scraps and unpublished manuscripts. There are copies of short-lived journals I’ve never heard of, including Northern Journey (1971-1976), Ichor : a magazine of surreal prose (1980-1), POP (Poésie Ottawa Poetry) (c. 1985), Ottawa Poetry News (1976), Review Ottawa (1977) (a journal that was quickly renamed and relaunched as the far more successful Anthos Magazine and subsequent Anthos Books) and Reenbou: revue plurilingue de poésie / plurilingual poetry magazine (1979), as well as some I’d heard of but had never actually seen, including the infamous Sparks (1976-77) and the first three issues of Stephen Brockwell’s four-issue The Rideau Review (1987-8). There were publications I haven’t thought about in years, such as Hook and Ladder (1994), or my own early STANZAS (1993-2006). The wealth of Ottawa-based publishing from the 1970s was so much that it prompted me to attempt to collect a listing of as many as possible into an online bibliography, a project that remains very much in-progress. What is intriguing throughout is the range of journals and books annotated, marked up with comments, underlines and post-it notes. The manuscripts and clippings will remain here in a banker’s box, for the time being, until I can figure out where best they belong. I might not care much for the writing she did, but I’m interested in her as a reader, and as an incredible supporter. Clippings include multiple articles, including obituaries of Canadian poets she followed, such as Milton Acorn.

As I sort the last of her books and chapbooks into boxes for donation to the Friends of the National Library, I’m struck by her ongoing engagements with poetry communities in Ottawa, Toronto and Windsor, creating important connections between writers. I also wonder what it is I might be erasing by dismantling such a collection, and what parts of her portrait I’ve missed, now completely lost. Does it matter at all? Do I worry too much? Hers might have been an attention focused on a poetry built of plainer speech than my personal tastes might allow, attempting occasionally to break out of the lyric, but not often, but the generosity of spirit is unmistakable. Also, given I’ve been loosely collecting knowledge on Ottawa literary works for some time now, I’m aware of certain absences in Jordan’s collection, such as titles by some of the poets around Dennis Tourbin during the 1980s—Michael Dennis, Riley Tench, Luba Szkambara, Louis Fagan, Scott Moodie, Mark Frutkin and Ward Maxwell—or even those centred around Carleton University and/or Arc magazine, some of which were also part of the Ottawa Poetry Group—Christopher Levenson, John Barton, Colin Morton, Holly Kritsch, Nadine McInnis and Sandra Nicholls—or even poets such as John Newlove and Stephen Brockwell (this is less a complaint than a curiosity). Instead, it would seem, hers was an Ottawa poetry entrenched in and focused upon the poets of Sandy Hill, closer to events such as Sasquatch, TREE and Orion, with touchstones such as Seymour Mayne and Juan O’Neill, and the shadow of the University of Ottawa. And yet, the books quickly present a portrait of a writer deeply engaged with poetry and a community of writers, one she helped encourage and foster, back in the days when Ottawa literature, specifically Ottawa poetry, had very few champions.