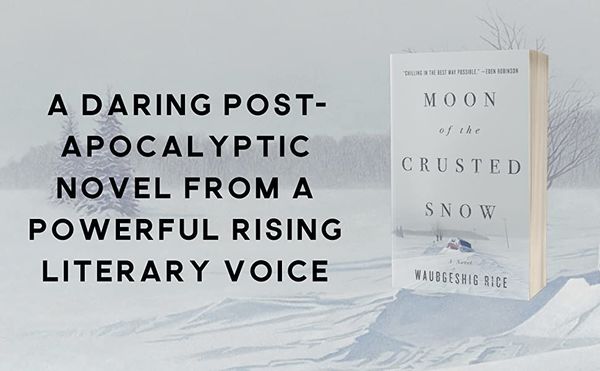 Writing a novel is a grind. It’s an arduous, meticulous, and often repetitive process that can take years. There’s the actual typing of words onto the page, and then come the edits and rewrites, which seem to sometimes unfold in an indefinite way. For writers, it can be difficult to see the finish line while mired in the toil of what feels like an intense marathon. But I believe a little more planning and preparation before the actual writing begins can help create a clearer path to that goal of finishing a novel. So I’ll share a bit of my planning process in hopes of providing helpful examples and practices.

I’m currently in the middle of writing the first draft of my next novel, which is the sequel to my 2018 story Moon of the Crusted Snow. Because it’s a sequel, I’m a little more ahead than usual because the entire backstory is already done. I have more time to focus on the next steps of the story rather than dreaming up key context. However, there are some habits I tried to stick to in the months leading up to actually forming words into sentences in prose. There’s no right or wrong way to write a novel, and I’m still learning at this point of my career, but hopefully these few tips will be beneficial, especially to emerging writers.

Any good story starts with an idea, and that comes to writers in different ways. Once that seed is planted in your head, it could grow in all kinds of directions. And then if you decide it’s worth committing 80,000 words or so to in a novel, it’s important to hone in on the idea before you can expand on it. So what I like to do is write out a focus statement of sorts. If someone asks me what my project is about, I want to be able to tell them in a concise way at first. For example, if I was asked about my last book, I could say “Moon of the Crusted Snow is about northern Ontario First Nation surviving a world-ending blackout.”

As that idea gestates, I try to expand that description over a short period of time. I’ll write out a couple more sentences, and then maybe a full paragraph to describe more of the novel. A little while later, I’ll try to expand that to a few paragraphs, and then maybe a page. I find this method helps me expand the plot, and gives me a little more direction as to where I want the story to go. These summaries of various lengths will also help when it comes time to pitch the book to a publisher or an agent.

When I’m comfortable with the basic plot, I start to sketch out the novel’s characters. Fully-formed, complicated, and believable characters are the emotional core of any good story. They’re essential in evoking empathy in readers. What I like to do is write out detailed character profiles in point form for each. I’ll identify their appearance, traits, likes, dislikes, relationships with other characters, and so on. I feel like I need to intimately know the characters I’m writing about before I put them in any situation. That can also help guide me through the plot in case I hit any snags along the way. For example, I’ll ask myself, “how would (X) respond to this?” and it might make the next steps a little clearer. Not all details I imagine for them will make it into the story, but they’re there in case I need them.

There are a lot of different ways to map out a novel. Some authors like to plot out sticky notes on a wall. Others write out chunks of prose around each plot point and assemble everything into a narrative. I just plot everything out in point form in a word processor on my computer. Again, these begin with basic information like setting and event, and then I add more points as I think everything through. Currently I’m writing a story that has a lot of action and movement, so with this one I lined everything up by scene. As I lay out all the points, I consider where to structure certain narrative elements, like opening, context, rising action, climax, resolution, and so on.

With the basics planned out, I always make sure to take in as many different kinds of stories as I can before I begin to write. That includes reading books (fiction and non-fiction), watching movies, television shows, and documentaries, and listening to interviews, audio stories, and music. The first priority is always reading, because as the notion goes, you must read if you want to write. I read fiction for inspiration and non-fiction for research. Watching movies and TV shows is more for entertainment, but I can often absorb ideas about dialogue and plot from those. And I believe listening to current affairs radio is essential to hear real-life stories about all kinds of complicated situations. Finally, music of course can help set a mood or tone.

These tips are by no means the secret to crafting a good novel. They’re just basic steps I try to follow to help me plan my writing. I spent most of last fall undertaking this process (with more of an emphasis on research), and as winter unfolds, I’m putting words onto the screen in front of me, and I’m comfortable with the path ahead. Writing is a deeply personal journey, and you can always feel confident in making it your own.