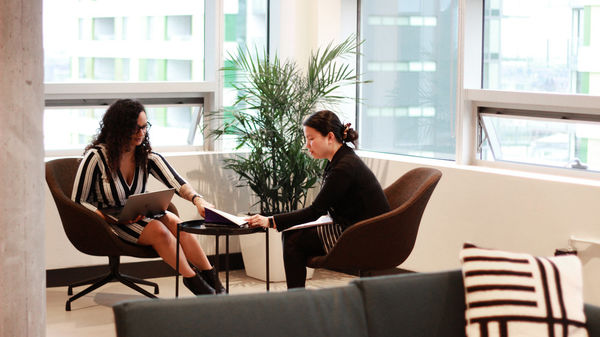 I crave collaboration. When I was young, I had no desire to connect or work closely with people in the way that I do today. Every bit of work I do now is infused with a strong community component, but it wasn’t always like this. Back then, I didn’t understand the necessity of community nor the power of collaboration because I was too bogged down by what could go wrong if I were to let my guard down, share tasks, and ask for help. My fears around collaboration were deeply rooted in my lack of trust in those whom I didn’t know for years and years. Was I giving too much of myself or my time to group projects? Was I creating more stress for myself by relying on someone else to do their fair share? Would I withhold creative ideas from the group? How would working with people I didn’t know help me in the long run?

Lack of trust was definitely connected to my antsy feelings toward collaboration. Trust starts with leadership and filters down. It is the cement that binds people together—people who have similar shared values, but with different talents, skills, and interests. In knowing this, I had to look at the past relationships in my life and ask more questions: Did I have anyone whom I would consider a mentor, leader, or trustworthy? Did I have anyone to bounce ideas off of or ask their opinions about something I was working on? My trust issues started in childhood. Whether it was a broken promise from a parent or someone offering up false information, or taking back something precious that was gifted to me, the result was always the same in my eyes: investing trust too early led to disappointment and lowered expectations.

The first time I was first faced with an opportunity for real creative collaboration (outside of the school-age setting) was during my first writing workshop. I was definitely eager to receive and offer feedback, but the thought of coming together as a group with a room full of strangers to discuss and critique another writer's work was beyond terrifying. The coolness of the metal chairs, the dull hum of the fluorescent lights, the omniscient laughter from another group in the room that was obviously pouring flawlessly from a quickly made bond—was sensory overload for an introvert like myself. To quiet the internal questions that I knew would come, I decided it would be important for me to try to build trust with these writers whom I would be working with for a full year, sooner rather than later. I needed to get to know who they were, what their motivations were, and how they arrived in this space. Once I knew these facts, I was certain the trust would flourish from there. Or at least I hoped so.

When I collaborate with folks now, there are a few things I need to be able to do in order to fully embrace the power of collaboration. If our values do not align right away, or if more excavation is needed to figure out how we can work together, then the following need to be encouraged:

●            relearn myself via being temporarily uncomfortable

Looking back on that first workshop day, I started by asking the folks in my new group a series of questions. The more we knew about each other as a group, the better. I discovered that one woman in the group was a mother of three and that in order for her to take this workshop she had to bring her children with her each day. She smiled and pointed just outside the classroom door where the three of them sat huddled together watching a music video on an iPad. She was happy to be in the workshop group and she did what she had to do to hold that space for herself. I learned a lot about her in the first fifteen minutes. Another person in the group was already a published author. The rest of us looked at each other wide-eyed and nervous. He clarified that this was his first creative writing course and that he’d only ever published textbooks, he was just as nervous as the rest of us. The consistent hum of the lights finally stopped.

And it went on like this for another hour. Slowly, the trust was building within the group, enough so that I could picture collaborating with these good folks in ways that surpassed the workshop setting. We, as individuals, made a similar decision to be in that space based on our own closely knit values, and that was a pretty good start. There were no false promises made, no take backs, and no negative energy being thrust into our newly found circle.

My process for collaboration has stayed a process ever since. I try to surround myself with people whom I’ve already built trust and whose values and mission (professionally and personally) align with my own. And when they don’t, I speak up and communicate this incompatibility as openly and honestly as I can. If something doesn’t feel right, I listen to my gut just as I would when writing one of my characters doing something they would never do. There’s a real sense of alignment that comes from working and thinking in this way. It’s shaped the way I operate at all levels.

It’s not hard for me to admit that it’s nerve wracking to put myself and my ideas out into a world that may aim to throw them back in my face, forcefully, especially when trust has held me back since I was a young girl. But I endure, I power through because I can’t imagine operating in any other way. And just like writing, that dominant fear of being judged is always a constant. I dream my endless potential into existence with steady desire, effort, collaborative dreams, and watch as things flower into fruition.