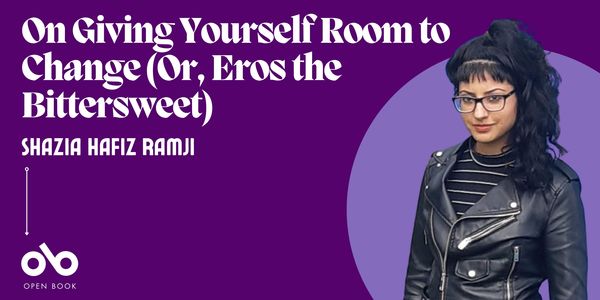 A few months ago, I talked to someone on the phone. I didn’t know this person well and though I’d seen them over Zoom somewhat regularly for our work together, I never really noticed them too much. Sometimes you just have to get the work done, right? But then we spoke on the phone and their voice felt familiar – incomparably familiar. I was not stuck on my novel before I spoke to them. After we spoke, I became so stuck (for months) that I wondered if I should finally just chuck this novel and return to my second novel, which is smoothly chugging along on a coast 81 years in the past (yes, there are two novels, forgive me).

The part in my novel that I was stuck on required me to feel deeply about a mistake that I’d made in the past. The person whose voice felt incomparably familiar was somehow making me confront this experience again: I had to admit that when this person’s voice felt familiar, I felt something strange and intense, too quickly and too lingering for my liking, and I couldn’t admit it, because I associate that kind of feeling with who I used to be and with several kinds of addiction. (I know this feeling well, because I’m a recovered addict, and I’ve worked really hard to unlearn trusting that kind of emotion.)

What had happened to my writing was this: I was stuck because I had lost the vantage point I needed to write this chapter, since I was feeling what I used to feel in the past, and I could no longer see myself clearly; I needed to separate myself from my past self in order to continue writing, and that separation was no longer possible.

Months went by and I could not believe how much of an effect that phone call was still having on me and my writing – I hadn’t experienced serious writer’s block for a whole year prior to this! What’s worse is that strange things started happening after I began puzzling over the familiarity. I would think about this person before meetings: what they might say, what they might wear, how they might act. Uncannily, they responded very similarly to what I had imagined – several times. I freaked out eventually and told one of my partners what I was experiencing. “Maybe you feel like you know them because they’re a bit like you,” he said. It made sense but I shook my head in denial. He asked if I was attracted to this person and I shook my head again. He reminded me of a book I’d introduced to him, which changed both of us: Eros the Bittersweet by Anne Carson.

Carson writes: “As Sokrates tells it, your story begins the moment Eros enters you. That incursion is the biggest risk of your life. How you handle it is an index of the quality, wisdom, and decorum of the things inside you. As you handle it you come into contact with what is inside you, in a sudden and startling way. You perceive what you are, what you lack, what you could be.”

I said recently that “Carson’s conception of Eros reminds me of what Kazuo Ishiguro said about characters. He said he doesn’t think about character in terms of “character” but in terms of relationship; each character should be sufficiently transformed by the other in order for the story to work. Carson and Ishiguro have completely changed how I write!”

When the person with the familiar voice spoke with me again, they asked how my writing was going. I wanted to laugh at the irony, but I didn’t laugh because I was really pissed off that they had affected me and my novel so much – to the point of rethinking and rewriting it thoroughly (yet again). Recently I regained clarity. I concluded that I was jarred by the familiarity I felt because I was seeing a part of myself – my past self – in this person. I didn’t like seeing it and I didn’t want to see it. I didn’t like the fact that I hadn’t been able to see this person clearly either. I was especially uncomfortable about being drawn to them without being able to label it as attraction (or another similarly clear and distinct feeling).

While I was sharing cake with my partner recently after a much-needed writing session (during which I finally returned to confront and transmute that mistake I’d made while using drugs), I told him suddenly: “I want nothing to do with my past. I’m just done.”

Carson says about Eros: “Desire changes the lover. […] The change gives him a glimpse of a self he never knew before.”

The writing is going well now, and I am really grateful to have met this person with a familiar voice because it’s led me to trust what I feel – enough to allow myself to change, and to be changed by someone else.