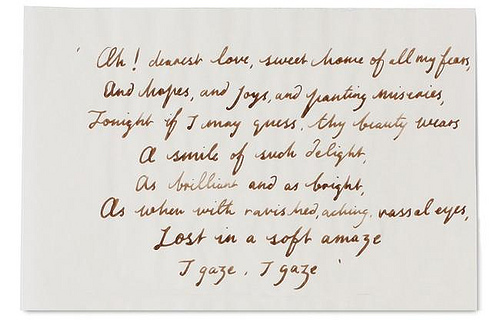 A couple of years ago I had a serious health scare. Without going into too much detail, I was admitted into the hospital in late spring and for a brief time no one was able to tell me for sure whether or not I would live through the summer. I had just finished putting together a chapbook of poems, which was to be published in the fall, and until my prospects for survival were more certain I seriously considered cancelling it—not because I wasn’t happy with the poems, but because they weren’t meant to be, you know, last poems. Few things are attended to with more gravity than the posthumous publications of the freshly deceased, and this seemed at odds with my notion of the chapbook as a sandbox, a place to play and experiment with low or no stakes.

In the two years since, as many of my friends have published their first books, I’ve often thought about the metaphor of a body of work, a corpus.

There is an ambitious presupposition built into the notion of a “first” book, and despite how hard we work on writing, publication and promotion, writers don’t often talk candidly about ambition. There are always more applicants than there are teaching positions and grants, but those writers perceived as being too ambitious risk being labelled “careerist” or “competitive” by the rest of us, especially when the rest of us are jealous, underemployed or half in the bag. Therefore the professional pressure from publicists and job coaches to constantly promote one’s accomplishments and project success is frustrated by an unspoken social imperative to affect humility.

As you might have guessed, I didn’t die two years ago. I haven’t been cured, so to speak, but I’m not presently sick; treatment is ongoing, and while I may ultimately live out a full life, I’ve also seen the data on outcomes for my condition, as a result of which any time I think about my “first” book I can’t help but consider the likelihood that it may also be my last. This is an unpleasant and necessary consideration for writers who for one reason or another can’t reliably plan their lives in twenty-year intervals, but it’s only one of many. While I’m still breathing, I don’t want death to govern my artistic impulse or professional ambitions; I’ll stop writing and publishing when I’m dead.

It’s a rare privilege to consciously amass a body of work, rarer still to get to bury its feet, to hide the juvenilia under new work, or buy up the remaining print run of the not-so-fictional campus novel you hastily published ten years ago. Two years ago I worried about what—if any—kind of literary corpus should stand in for my fleshly body in the event that the latter expired, but I’ve since realized that that approach is prohibitive and self-defeating. If you evaluate every piece of writing based on whether it’s good or meaningful enough for posterity, you end up like those people who read a self-help book about decluttering and discard whatever doesn’t bring them joy: you waste a lot of perfectly good stuff.