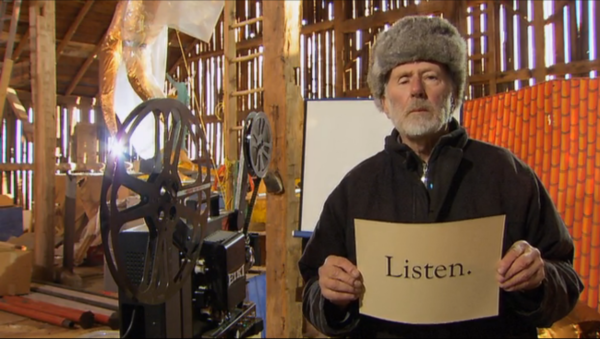 Would it be strange to say that listening continues to save me? I didn’t know that it did until I wrote Port of Being. I was unemployed at the time, which gave me the chance to wake up at 6:30 a.m. and walk the city regularly – all the way from my home in East Vancouver to the harbour (close to two hours at a leisurely pace). I collected sounds on those walks through field recordings and notebooks: bits of overheard conversation, inventories of noise and silence, machinic textures of the city.

I had also been stalked and diagnosed with PTSD. Listening was a way of learning to live again – “to bring myself into relation again” – and here I quote myself from the author’s note at the back of my book, because I did actually turn to it this November to remember what to do when my depression peaked.

And so, a couple of weeks ago, I went on a soundwalk. It’s a little more than a walk without your phone and your headphones. Soundwalking, according to composer Hildegard Westerkamp, is “any excursion whose main purpose is listening to the environment. It is exposing our ears to every sound around us no matter where we are.”

“Soundwalking” as a term first emerged in Vancouver in the 1970s as part of the World Soundscape Project, founded by R. Murray Schafer, a Vancouverite, composer, and author of many books on sound, including The Soundscape and A Sound Education: Exercises in Listening and Sound-Making, which I’ve been using to stave off pandemic depression.

The first exercise asks you to list all the sounds you can hear. My favourite is the second one, which asks you to categorize them: 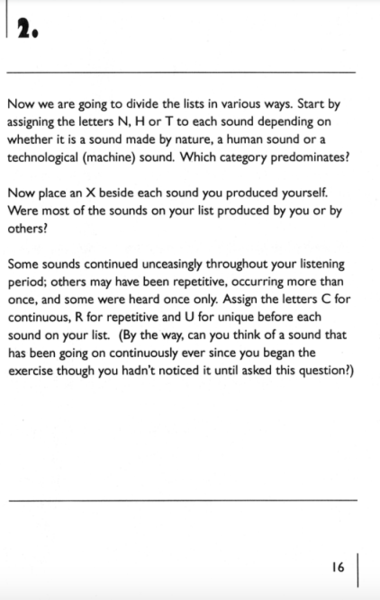 While categorizing sounds on my soundwalks, I’ve noticed that the ones labelled “C” (continuous) and “U” (unique) increase with every soundwalk. This means that I’m allowing myself to hear things I had not heard before.

In The Soundscape: Our Sonic Environment and the Tuning of the World, Schafer quotes Marshall McLuhan on the totality of terror and Schafer says that ”the ear’s only protection [from terror] is an elaborate psychological mechanism for filtering out undesirable sound in order to concentrate on what is desirable. The eye points outward; the ear draws inward.”

It may seem odd to think that soundwalking is a way of managing terror – in this case, I’m choosing what to listen to and what to allow – I’m refusing the noise of the pandemic, which makes my depression worse.