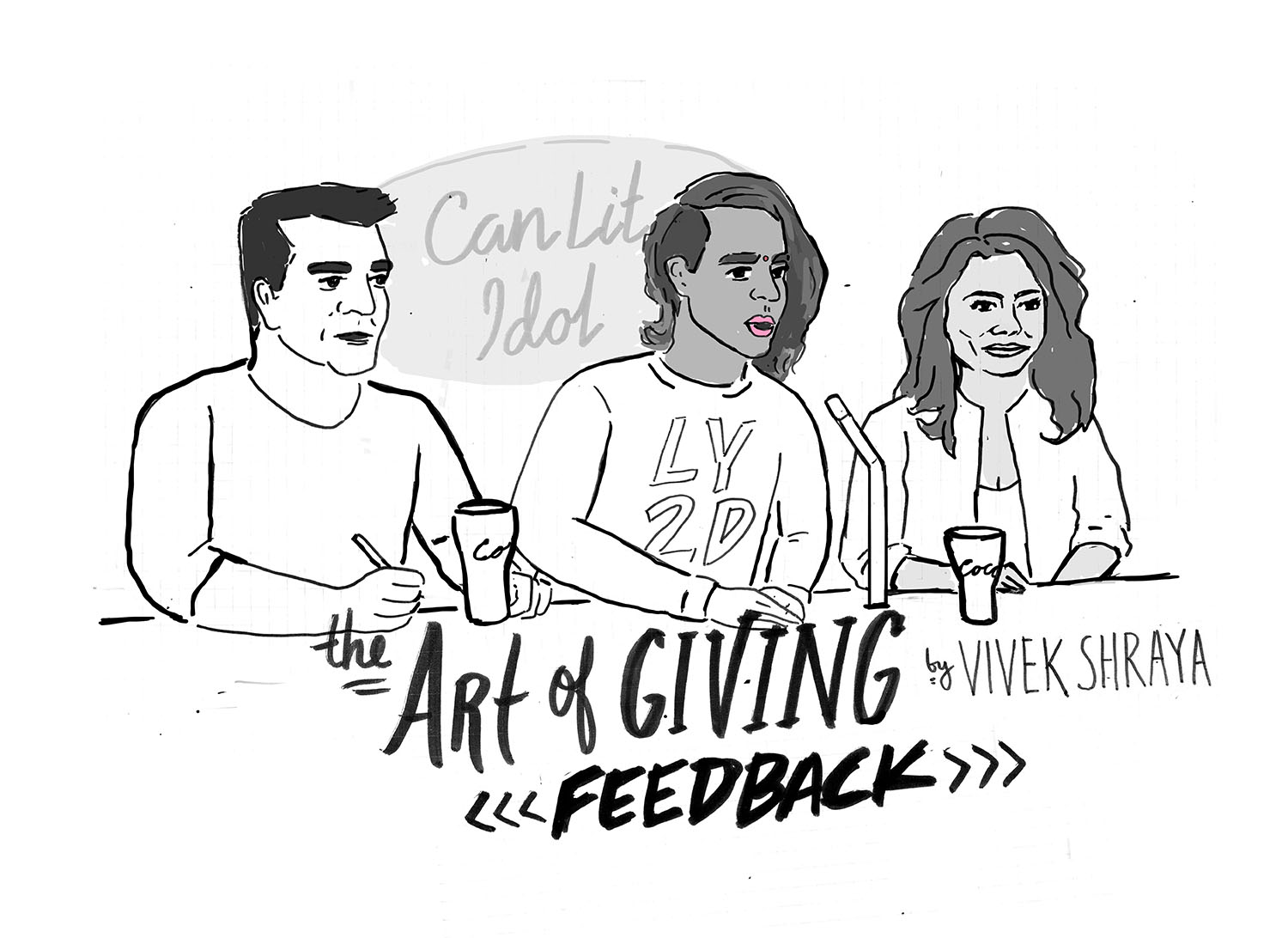 In 2009, after I had finished an early draft of my first book, God Loves Hair, I gave some of my closest friends a copy of the manuscript for their feedback. It was a vulnerable experience, especially given that I hadn’t really explored prose writing since grade school. Soon after, I had them over to dinner to discuss their thoughts on the book. I was relieved to hear that it wasn’t terrible! It was also illuminating to learn the places and words that elicited confusion: “Would a character this old still be in daycare? And shouldn’t it be called ‘child care’?”

I often think back to the incredibly useful feedback I received that night. I realized then that feedback was an essential part of the writing process and that I couldn’t write the best possible book without the perspective of others. For this reason, since God Loves Hair, I have kept increasing the number of readers I ask to give feedback. Even if I don’t always use every piece of feedback I receive, it is still always useful to see your writing from new angles.

Poet Maureen Hynes was one of the people at that dinner in 2009 and one of the original editors of God Loves Hair. Since then she has become someone I regularly approach for feedback. I wouldn’t be the writer I am today without her wisdom and mentorship. Trish Yeo is a professor at George Brown College who I worked closely with on the manuscript for She of the Mountains. She is someone I regularly consult with on my writing as her perspective is always extensive and nuanced, and therefore invaluable. Both Maureen and Trish have different approaches to giving feedback, which I appreciate, and I thought I would ask them to discuss about their processes.

What are your main considerations when giving feedback?

When a writer invites me to offer feedback on their work-in-progress, my first step is always to determine what specific kinds of feedback they are open to receiving. Do they want comments about content? Structure and organization? Style and word choice? Anything and everything? Or are they looking for a copy-editor—or even a proofreader? Establishing expectations and boundaries up front helps prevent frustration and disappointment later. I also ask the writer to outline the purpose or goal(s) of the piece and to describe the audience(s) they are addressing. Finally, I clarify timelines and deadlines.

I’m trying to move onto the territory the writer is occupying & exploring. Making that mental leap and immersing myself into what the writer wants to do with their project. Starting my responses from being within the work, seeing where this particular work of art wants to go. Often this takes a number of readings. I feel this is a basic kind of respect for the work and the writer.

Are there any specific techniques you use when giving feedback?

I have pretty consistently borrowed a technique from one of my poetry mentors, Don McKay. He marks spots in a manuscript with certain diacritics:

!     Applauses for the writing! Gasps of wonder!

↓    “Put pressure on this word or phrase or line.” By pressure, he meant, really, that the word/phrase/line I’d used was the first one that came to mind (and often the first one that comes to mind is a cliché, a short form of thinking). As writers we owe it to our readers (and publishers!) to work hard on originality, on coming up with new ways of seeing and saying things. This doesn’t mean being obscure, or overreaching—it means searching out exactly the right word or phrase or simile or metaphor so that the reader can see or feel or hear what you intend.

I give a lot feedback in the form of questions. Asking questions steers me away from making assumptions about what a writer is thinking or saying, or what options they have or have not considered during the writing process. Effective questions highlight possibilities, and the writers I work with come up with responses that are better than any I could have imagined. They are, after all, the creators, and they know their work best.

When I am suggesting specific revisions, I give examples that show what I mean (“show, don’t tell” applies to feedback as well) and offer several options for the writer to consider. If I am recommending a revision that I suspect the writer will resist, I explain my reasoning as clearly and concisely as possible, focusing on the writer’s goals and the audience’s needs. Perhaps most importantly, I try to remember to comment on aspects of the piece are particularly strong or striking—compelling ideas, powerful imagery or fresh phrasing. Knowing what works is just as valuable as knowing how a piece could be strengthened.

You have just read a terrible piece of writing that you have been asked to give feedback on—how do you approach this, aside from the "shit sandwich" approach?

First I would analyze my response to the piece: why do I think it is “terrible”? Is there something about the ideas, the style, or the tone that I find personally offensive, problematic, or annoying? If so, would the intended audience be likely to have a similar response? If they would, then I would need to tell the writer—gently but clearly—what I find troubling and how this might affect readers. Ideally, this would open up a productive conversation about the writer’s intentions that would shape the rest of the feedback process. On the other hand, if my response is purely personal, identifying my feelings would enable me to refocus on the job of offering useful, productive feedback.

If the issue is with the writing itself rather than the content, I would ask the writer what they like best about the piece and what they feel could be improved. Writers are generally well aware of the strengths and weaknesses of their own work, and tend to be more open to addressing challenges they have identified themselves. Then I would offer feedback that bolsters the aspects of the piece the writer loves and outlines concrete solutions for problems the writer wants to address.

First, my heart sinks and my mind goes blank and I toy with utter despair at saying anything useful.

But then as I think more deeply about the work, I see that there are often some basic problems that I can pinpoint. In the case of poetry, it’s often the case that people feel that just pouring out their emotions or experiences, whether celebratory or melancholic, onto the page makes a poem. Or the other end of the spectrum: some tend to think and write entirely in abstractions, so they are weaker in concrete images, specific incident or location. Either way, the writing feels very private, and it’s hard for the reader to know what the writer is telling us.

So I encourage the writer to go for a more holisticapproach, and I think this works for all genres. I think a poem or story or essay or personal narrative has to engage our minds and all our senses, not just our emotions. This means ensuring some sensory details—the tastes, smells, sounds, etc.—are worked into the story, that incident and events are presented through dialogue and convincing description, and some thought goes into why these details are present. I guess this is the old “Show, don’t (always) tell” chestnut of writerly advice.

What is the biggest challenge of giving feedback?

The biggest and most important challenge is earning and keeping the writer’s trust. Giving feedback on writers’ work is both a privilege and a responsibility. That said, it is always more difficult to receive feedback than to offer it, so I must show respect for the writer and the work in every comment. I must communicate effectively, especially when I am offering feedback a writer might find difficult to hear, and be receptive and humble when writers object to or reject my suggestions.  My best relationships with writers are conversational and collaborative—we work together, but we have clearly defined roles. It can take time and effort to build that kind of relationship, but it’s a worthwhile investment. There is nothing more satisfying than seeing a project grow from a bare-bones concept into a fully-realized work of art.

It’s frightening to give your work to someone for them to read and analyze and assess. It’s also kind of frightening to be giving the feedback. So I see two challenges: compassion and usefulness. How to keep in mind the fear people have when they hand over their work, and the hopes they have for it. And how to lead someone to reconsider their choices, which will make the work stronger. I do prefer kindness, but sometimes directness works better.

What is the most valuable feedback you have received on your writing or work?

This may not be the most profound feedback, but the most memorable comment I have ever received came from a professor I revered as an undergraduate. On my first essay, she wrote: “I would think that someone who writes as well as you do would have learned the difference between its and it’s by now.” This open-faced shit sandwich was mortifying but effective. I immediately learned the difference, and have never forgotten the comment or the rule.

Another poet mentor, Roo Borson, was editing a manuscript of mine before I sent it to a publisher. We were working our way through poem after poem, and she stopped at one and exclaimed, “Look at the distance you can travel when you write simply!” Hmm, I thought, watch out for writing in an overblown, “poetic” way. Just write simply. Such good advice.