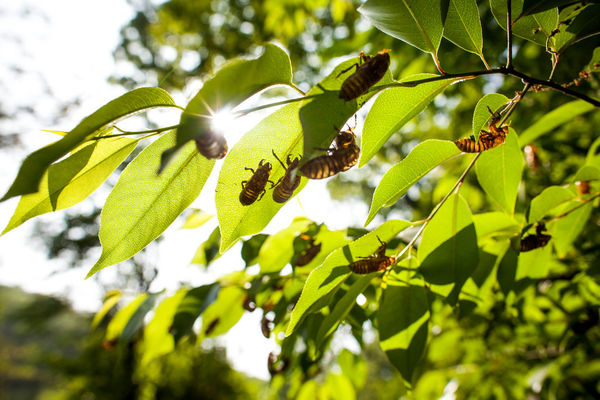 What cicadas can teach us about embracing the murk

This year, millions of cicadas emerged from the ground and took to the trees in deafening chorus across North America. During the hottest days of summer, their metallic drone echoed through branches, indiscriminately piercing through wild canopies, heat-soaked streets and suburban boulevards.

2021 was a “bumper season” for the strange, otherworldly insects. It happens in cycles, a natural phenomenon that graces ecosystems every 17 years or so. For me, the sound is a marker for summer, sonic nostalgia that transports me to hot, carefree days of childhood in semi-rural Southwestern Ontario.

Today, the cicada also offers a powerful metaphor that has strangely helped me navigate my languishing experience of writer living in the midst of a global pandemic.

Cicadas might be a weird place from which to pull inspiration, but hey, it’s been a weird time. Undeniably, the work-from-home, learn-from-home, waste-away-from-home reality has impacted all of us in significant and existential ways.

Personally, it has been over a year since I have written anything to completion. The uniformity of the day-to-day has done odd things to my creative brain, liquefying it, turning it to a soupy medium that muddies and obscures any ideas that may lie in waiting inside it. There have been some glimmers of hope – manuscripts started, characters established, worlds unfurled … but most have retreated back into obscurity. It’s been frustrating, to say the least.

So, back to the cicada. The insect spends 17 years of its life underground in the mud. Then, it emerges, a dazzling emerald with crystal wings and a call that reaches decibels rivaling leaf blowers and miter saws. It is a strong symbol for the importance of time spent gestating and processing before emerging to fill the space around it with a flourishing trill that announces yes, it is here, and it is alive.

Right now, like the pre-emergent cicada, I am, creatively speaking, in the muck. At times, the anxiety of this unproductivity is a dragging force, pulling me into spirals of self-doubt and persistent questioning of my ability to write. Perhaps the other times I’ve written things that made their way somewhere were only flukes, seasonal anomalies forged under optimal conditions unlikely to ever occur again.

Life in the muck can feel myopically inescapable. Perhaps it’s best to just burrow down further. Embrace the comforting lull of the deep. Scroll through Twitter. Get blissfully caught in a never-ending time warp of Reels.

I know that for some writers, the past eighteen (!) months have been a productive time. Excellent books are still being written, after all, and many authors are thriving creatively.

Still, I have the hopeful and not entirely unfounded suspicion that I’m not alone. I have evidence, too, I think. In my social media scrolling, I’ve been comforted – even buoyed – by the sentiments of fellow writers voicing the same experiences.

Months ago, while lying inverted on the couch, my rapidly-aging face lit up in LED blues, I came across an Instagram live of Neil Gaiman in conversation with Oliver Jeffers. Listening to these two powerhouses of children’s literature at an ungodly hour was the perfect remedy for my own inferiority/imposter syndrome, I rightly decided. And as I watched, Mr. Gaiman said something that struck me. He too, during the pandemic, had been struggling to create.

He had a theory as to why this was. To badly paraphrase, it was that so much of his processing power was allocated to bracing for and planning for the “what if” scenarios of the pandemic. This may have been the same part of the brain he used to imagine, to daydream, to mind-wander … to create. Perhaps the creative processing power was exhausted.

So maybe it was ok for me to activate sleep mode. After all, it’s important, not just as writers or artists, but as people enduring crisis, to allow ourselves permission to hibernate.

I’ve decided it’s ok to retreat into the comforting mud of my own subconscious. I am taking time to simply rest, absorb those creative nutrients, and wait for something to happen. (Ok, to be fair I am also working, parenting, freelancing and … I am writing, bit by bit.) I’m taking the pressure off.

An eco-conscious farmer understands the importance of the fallow period. It rebalances the nutrients in the soil and allows micro-organisms to re-colonize. The wildness of growth above ground offers a haven for birds and other wildlife. Like cicadas.

So if you too, like me, are a writer unable to produce right now, bogged down by the pull of the everyday, don’t fret. Embrace your time in the mud. Let the mind go fallow, if only for a time, to replenish the soil of your creative field. Someday, when the air around you is right and the sun has warmed through, perhaps your own song will emerge, one that cuts through the noise and announces your arrival for everyone in earshot. I’ll be listening for it.

We’ll call it your bumper year.

Jon-Erik Lappano is a person who stays up too late working on things, including writing books for children. His debut picture book, Tokyo Digs a Garden, illustrated by Kellen Hatanaka, won the Governor General's Literary Award and was a finalist for the TD Canadian Children's Literature Award. His second book, Maggie's Treasure, was inspired by Jon-Erik's young daughters and has received wide critical acclaim. Jon-Erik lives in Stratford, Ontario, with his family and a growing assortment of pets.