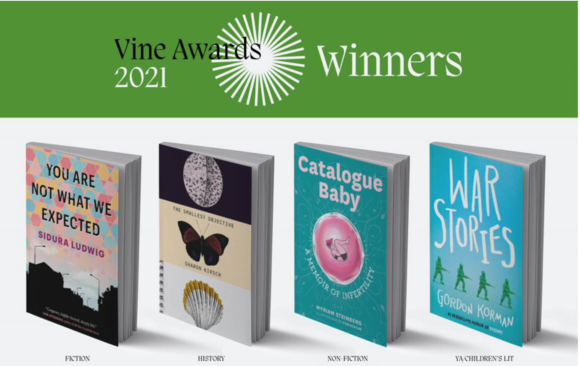 Last night during a virtual event, The Koffler Centre of the Arts announced the four winners of the 2021 Vine Awards for Canadian Jewish Literature.

The unique set of awards celebrates not only Jewish writers, but also non-Jewish writers who engage with Jewish themes in their work. A $10,000 awards is presented in each four categories: Fiction, History, Nonfiction, and Young Adult/Children's Literature. There is also a poetry award that is presented once every three years.

This year's jury, which was comprised of authors Zelda Abramson, Nathan Adler, and Naomi K. Lewis, read 42 books in total in order to choose the winners in each category.

The Vine Awards for Canadian Jewish Literature are supported by the Lillian and Norman Glowinsky Family Foundation to support Canadian Jewish literature. The Vine name is a tribute to Lillian's parents, Helen and Stan Vine, who were dedicated supporters of both the arts and the Jewish community during their lives.