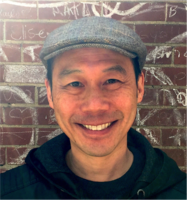 Playwright David Kingston Yeh's debut novel, A Boy at the Edge of the World (Guernica Editions), follows Daniel Garneau, 18 years old, as he moves to Toronto from small-town Ontario.

Young, gay, and optimistic, the teenage hockey player finds himself torn between two very different men, navigating city life, and tumbling down the bumpy paths of self-discovery, first love, and often hilarious misunderstandings. Sharp, witty, and heartfelt, A Boy at the Edge of the World is a smart blend of humour and insight, creating a character and a journey that feels both relatable and fresh.

We're excited to welcome David to Open Book today to take our Lucky Seven interview, where we ask writers about their newest books and their writing process.

David tells us about the influence of confessional social media on the book, the process of writing about gay sexuality and learning to reject internalized limitations (he includes a great inspirational quote), and writing as a morning person.

Tell us about your new book, and how it came to be.

A Boy at the Edge of the World is an episodic novel about a young gay man’s exploration of sex, intimacy, and love. It’s inspired in part by my own experiences moving to Toronto, and my work as an LGBTQ2S counsellor. While the book’s overall approach is light, the issues it touches upon are not. When pitching the manuscript to publishers, I’d compare it to HBO’s Sex and the City, if only to highlight its dramedic tone and candid treatment.

I introduce the protagonist Daniel Garneau when he’s eighteen, and we follow his misadventures in dating and relationships over the next five years. It was important for me not to be circumspect or coy in depicting gay sexuality. But I wanted to offer the same privileged realism (and validation) that straight sexuality enjoys in media and culture. As the same time, by keeping to a minimalist, documentary language, I hoped to actively engage readers in creating the story, one enlivened by their own personal, subjective meaning.

In structuring the book, I observed how so many people share their lives through Facebook and Instagram feeds. What if I were to translate this form of story-telling into narrative prose? So the book is recounted in the first person, and begins with Daniel’s statement: “I could remember that moment as easily as turning a page in a photo album.” By the time I was done, I’d written a confabulated fictional memoir of sorts ~ lol. Of course, the autobiographical works of of David Sedaris and Augusten Burroughs were also influences.

My question at the outset was: What does it mean to be a gay millennial in Canada? The book’s title refers to these three intersecting locations. Daniel Garneau’s generation is post-gay liberation, and post-HIV/AIDS crisis; during the course of the book’s events, Canada becomes the third country in the world to legalize same-sex marriage. How does any young person navigate this new zeitgeist? Thrown into a tumultuous, changing world, how do any of us find authentic connection and meaning? While Daniel is a white cisgender male, my hope nevertheless is that this book begins to reflect at least some of the diversity and fluidity of sexuality, relationships, and identities flowering through modernity’s cracks in the 21st century.

Did the book change significantly from when you first starting working on it to the final version? How long did the project take from start to finish?

When I started working on this book, I already had a strong felt-sense for its themes and Daniel’s voice, and wrote it steadily over eighteen months. Later in the process, my editor Julie Roorda at Guernica provided some excellent feedback, improving a number of scenes. But overall, the final version fits my original vision. (Although, halfway through the process I realized I couldn’t include everything I wanted to explore – about the issues at hand and about the characters themselves – in one book alone…)

What do you need in order to write — in terms of space, food, rituals, writing instruments?

I write best in the mornings, and when I know I won’t be interrupted. After seeing my husband off, I retire to my studio (filled with plants, driftwood, and light) with my MacBook and mug of tea. Because I’m a little bit obsessive about accuracy in details, Google and Wikipedia are indispensable instruments for me. I typically review my morning’s draft on my Kindle during the streetcar commute to work.

My passion has always actually been speculative fiction; this entails world-building, which often led to writer’s block. The switch to realism with A Boy at the Edge of the World was a marked (and surprisingly cathartic) departure for me. I found it surprisingly easy to document my real world as autoethnography. If there were any difficult points, they arose when writing explicit sex scenes ~ this wasn’t Twilight fanfiction, but really person stuff! lol That’s when I reminded myself these were moments of internalized homophobia, and to just breathe and let it go. Elizabeth Gilbert exhorts: “Be the weirdo who dares to enjoy.” I think that’s such a wonderful quote. I recommend her self-help book Big Magic to anyone invested in the creative process.

A great book is frighteningly truthful. A great book elevates and deepens our compassion for others, and compels us to be better human beings. By the time we turn its final page, the way we apprehend the world has been changed, profoundly and forever. I might suggest Yann Martel’s Life of Pi or Cormac McCarthy’s The Road. I believe magic realism and speculative fiction especially can offer some of the greatest, most profound truths. Margaret Atwood has stated: "You may not be able to alter reality, but you can alter your attitude towards it, and this, paradoxically, alters reality. Try it and see.” A great book alters reality.

Back in 2016, I published the first chapter of a modern fantasy novel which I’d toiled at for years and which remains unfinished; I’d love to return to that project. However, I’ve only just recently completed a follow-up to A Boy at the Edge of the World, a more dense and complex sequel. So for now, I’m taking a break from writing, and working on neglected relationships with family and friends (and laundry ~ lol).

Born and raised in Kingston, Ontario, David K. Yeh moved to Toronto in 1993. Since 2004, David has worked as a counsellor and educator with LGBTQ2S youth. Along with his husband and a family of raccoons, David resides in Toronto’s east-end neighbourhood of Leslieville, up the street from a circus academy. He has written four plays produced in Toronto, and his short fiction has appeared in numerous magazines. A Boy at the Edge of the World is his first novel.

A Boy at the Edge of the World

Meet Daniel Garneau, your average gay hockey player from small-town Ontario. After moving to Toronto to attend university, Daniel meets David, a bike mechanic whose Catholic Italian mother talks to her dead husbands. Their chemistry is immediate, but Daniel is still drawn to his ex-boyfriend Marcus, a performance artist whose grandfather was a book-burning Nazi. A Boy at the Edge of the World is a rollicking dramedy that explores the compulsive and (ultimately) universal human pursuit of intimacy, sex, and love.