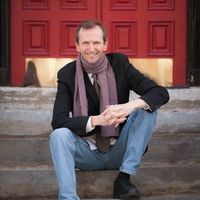 13 years ago, Adrian Michael Kelly published his Alberta Book Award-nominated first novel, Down Sterling Road, with Coach House Books. Both readers and author expected more would follow soon, but life had other plans. After years as an academic, Kelly has returned with an intense, thoughtful collection of stories that are more than worth the long wait: The Ambassador of What (ECW Press) examines the lives of men and boys as they work through childhood, poverty, divorce, and the complications of modern masculinity. Raw and tough, tender and honest, the stories find truth in run-down gas stations and small town restaurants.

We're excited to welcome Adrian to Open Book today to speak about how his long-awaited collection came together, as part of our Lucky Seven series.

He tells us about the time in between his books, discovering his collection at "the sooty end of a ten-year-tunnel", and the "sapping bastards" that writers work against.

The Ambassador of What is a child of almost total failure.

Thirteen years ago, I published a novel, Down Sterling Road, my debut work of fiction. I hoped to follow it up with another novel, a big, ambitious thing influenced by writers like Cormac McCarthy, Ted Hughes, and John Fowles. At the same time, I was writing occasional stories about my hardscrabble boyhood, and seeking the Holy Grail of tenure-track employment. My search was barren. Over four to five years of adjunct toil in four different provinces, I became blocked, and my marriage began its southward migration. Eventually, my life collapsed. Divorce, unemployment, poverty, despair: the lucky break I needed. Emotionally, creatively, professionally, I re-tooled, which meant letting go of the big, ambitious novel, and returning to short stories. Men and boys and maleness, marriage and divorce, money and not having it, the long haunt of childhood: having debuted with similar themes, I wasn’t always eager to revisit them, but whenever I did, the sentences sang, a rough and guttural music at times, but one I could finally live with. With time and effort, I had book’s worth, and Michael Holmes at ECW Press had a sympathetic ear. I am forever grateful to him. And I am grateful, too, for failure.

Contenders for central question include the nettling perennials: Who am I? Why am I? For what do I stand? Less fashionable, though no less important: What does it mean to be a man? What is manliness? Or maybe this: If family unmade me or left me unfinished, then with what, and how, can I make a me?

I never start with questions. I start with mood and rhythm. Rather, they start on me.

The Ambassador of What was never a project per se, not until I could see the light of a collection toward the sooty end of a ten-year-tunnel. I wrote a story at a time, a sentence at a time. Slow? You bet. But no one needs to write fast; they just need to write well.

I like routine, consistency. Same time, same place, day in, day out. With time to eat well and exercise (in my case, swim). Meditation and spiritual work are essential. Booze, minimal to none. Silence. Solitude. A volume of poetry always nearby. Sharpie, fine point. Hilroy notebook. Then a laptop. Let’s not forget massage and chiropractic. Writing is physical labour.

Discouragement attacks me daily. As does fear, and all the other sapping bastards. Since late-2013, I have made a series of short and effective spiritual exercises called The Tools (see the book of the same name by Phil Stutz and Barry Michels) part of my daily practice. They work.

Great writing makes a great book, and great writing to me means clarity, simplicity, and power. Blood Meridian is great. Emerson’s Essays are great. I once read in Ted Hughes’s Collected Poems and other books (including his prose) nearly every day for seven straight years, though that ardor has cooled some. The best short story writers recently are Mary Robison, Amy Hempel, Frederick Busch, though none of them are Great great. Don’t get me started on Great. Great is hard to stop.

Memoir. I seem to be able to write non-fiction more freely, and I need that for now, but fiction and its rhythms have a huge and heavy pull. Do I dare go back to it? Another ten-year slog? I am no longer young, and the clock is ticking on a life that—I don’t mind saying—has a hell of a story to it. Could be time to get it told, and plainly. Watch me try and end up dwelling on each and every sentence, each and every syllable.

Adrian Michael Kelly is the author of the novel Down Sterling Road. His short fiction has appeared three times in Best Canadian Stories and in the Journey Prize Anthology. He grew up with his father in Campbellford, ON, and currently lives in Kingston.

The Ambassador of What

Slogging through the miles of a city marathon, an 11-year-old boy encounters small miracles; about to marry one of her patients in a home for the elderly, a nurse asks her estranged son to come to the wedding and give her away; home from university, a young man has Christmas dinner with his hard-up dad in a bistro behind a rural gas bar. Men and boys and maleness, money and its lack, the long haunt of childhood, marriage and divorce — these lie at the heart of The Ambassador of What. Driven by an ear for how we talk, how we feel, how we fail, and how we love, these are tough and tender stories that take hold, and linger.