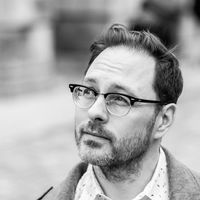 Midday at the Super-Kamiokande (Coach House), the newest collection by Matthew Tierney is named after a neutrino observatory in Japan, which gives readers a good bit of context for where the Trillium-winning poet is coming from in his fourth collection. Strange and playful, the poems combine the elements of the title - the quotidian of "midday" with the fantastic of the "Super-Kamiokande". Thoughtful, witty, and searching, Tierney's work intelligently interrogates the obscure and finds meaning in the abstract. It's an exciting collection from a consistently innovative poet and we're excited to welcome Matthew to Open Book today.

As part of our title-obsessed Entitled series, he explains his eye-catching title in his own words, gives us his personal Griffin Prize-style shortlist for titles, and shares his favourite, rather surreal, title from the new collection.

The Super-Kamiokande is a neutrino observatory in Japan. Neutrinos are near-massless particles that pass through most matter; they’re passing through you right now as you read this. Under certain conditions—say 1,000 metres underground, a pool with 50,000 tonnes of ultrapure water—one could catch sight of a neutrino colliding with another particle. It’s not YOUR chocolate coming together with MY peanut butter, but it’s pretty special. From it, we get a glimpse into origins of the big bang, the sun, supernovas. The poems in this book revolve around, touch upon, tease and outright raspberry the idea of evidence—empirical evidence, but also evidence of meaning, evidence of presence or evidence of absence. The full title, Midday at the Super-Kamiokande, adds with ‘midday’ an element of the quotidian: work, process, duration. Which are also good descriptors of how I came to it.

The title for a poem collection has to win the reader over. This happens twice. Once, when they see your book’s title for the first time, and again when they read the last poem in your book, and it resonates anew. The collection title is your most persistent lobbyist.

Titles of individual poems are more important but harder to either quantify or qualify. Long, short, pithy, plain—whatever. But it’s easy for a poem title to seem an afterthought, or merely utilitarian. I believe I can spot those ones, and no matter how good the poem it headlines, I mentally dock marks.

My favourite title in this collection is 'Who Said Owl the Owl Who Said Who.' First off, I love the oohs and ahs of the vowel sounds as they trip along. But it’s also a riddle of sorts, tipped off by the first line of the poem, which references Wittgenstein’s proposition, 'The riddle does not exist.' Hint: It does. Hint: It involves Winne-the-Pooh.

Here is my Griffin-style shortlist of recent collections whose titles I find compelling. The winner will be announced in June, in my head:

The Captain Asks for a Show of Hands, Nick Flynn

Trances of the Blast, Mary Ruefle [a truly inspired lift from Coleridge]

Joy Is So Exhausting, Susan Holbrook

Matthew Tierney is the author of three previous books of poetry. His most recent is Probably Inevitable, which won the 2013 Trillium Book Award for Poetry in English. His previous book, The Hayflick Limit, was shortlisted for a Trillium Book Award. He is a recipient of the K. M. Hunter Award, and has placed his poems in numerous journals and magazines across Canada. He lives in Toronto.

Midday at the Super-Kamiokande

These poems are HAL 9000 voiced by Kay Ryan, a Voight-Kampff test administered by Rae Armantrout.Midday at the Super-Kamiokande is part existentialist cry, part close encounters of the other kind. Think Kierkegaard in a spacesuit, Kubrik in a Left Bank café. Midday at the Super-Kamiokande draws on physics' Standard Model and Plato's Eternal Forms, Kant's transcendentalism and reality's brute facts, Augustinian grace and analytical logic. It aims to tear through abstraction with the concrete, either catastrophic - road accidents, nuclear explosions, floods, extinction, eviction, suicide - or quotidian, finding threads of love, empathy, and belief within the fray. It is by turns idealistic and cynical in the pursuit of meaning, both a resistance to rationalism and its champion. These poems delight in aphorism, paradox, puns, and wit, each stanza a closure that moves tangentially to the next, each poem more bricolage than narrative, more shuffle than playlist. These are poems with no middle. These are poems of beginnings, and of ends.