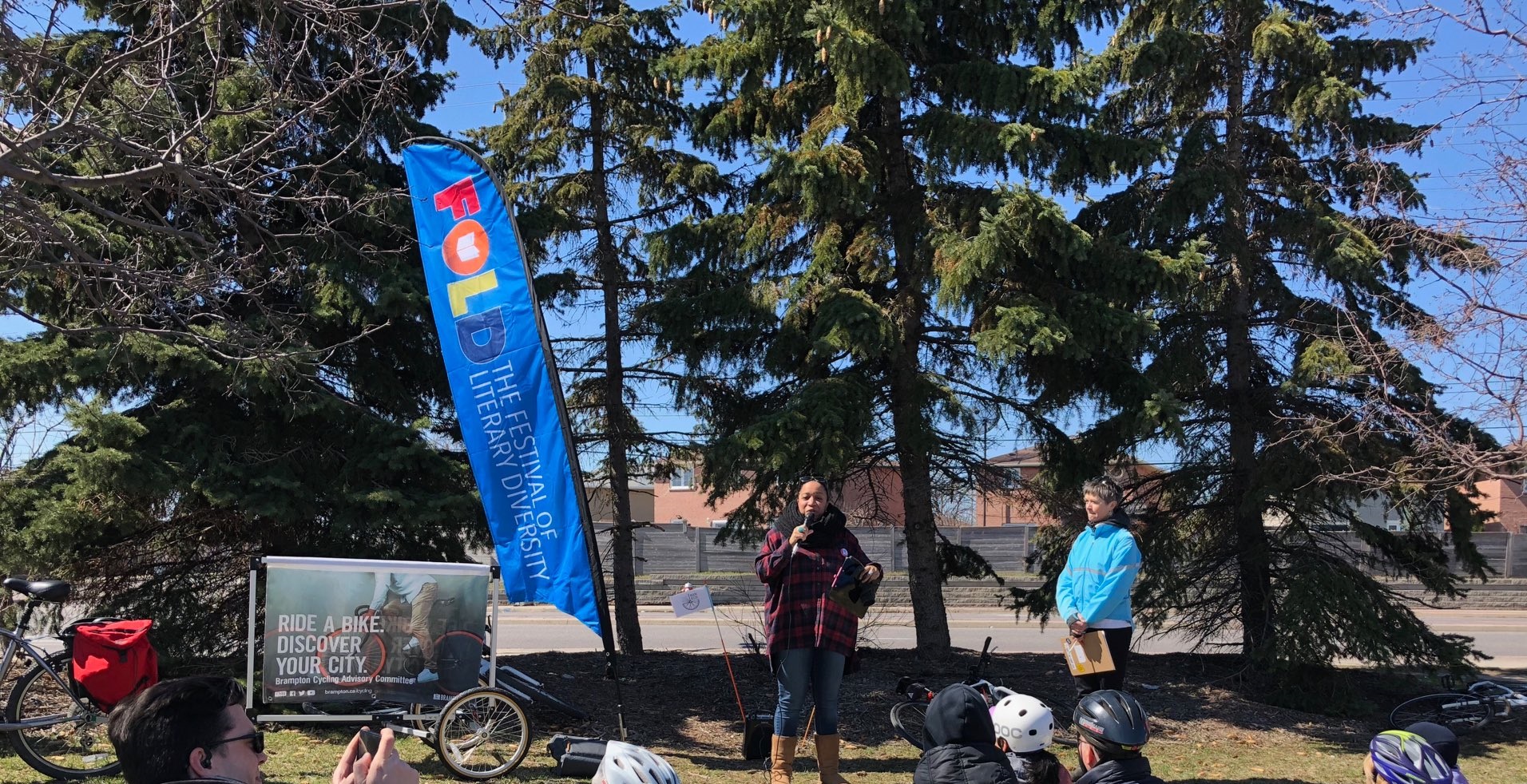 We're excited to welcome you to the first part of a new series at Open Book, with a focus on reading series' of all kinds, all of which form an artistic patchwork that connects many, many members of the literary community throughout Ontario. The work of the organizers and coordinators of these series, and the artists who participate, should be lauded far more than than they are. So, we've decided to start "ALL BOOKED UP," a continuing feature that highlights interesting, essential series and events far and wide.

This is also a great opportunity for readers to learn about readings and events that they might not have known of previously, and to note some favourites that they may want to attend, or support, and help them curate their schedule around these excellent happenings.

So, we begin our first entry with the Reading Line, covered by our own James Lindsay, a regular columnist at Open Book. Accompanied with photography from the event as it took place, thanks to Janet Joy Wilson. 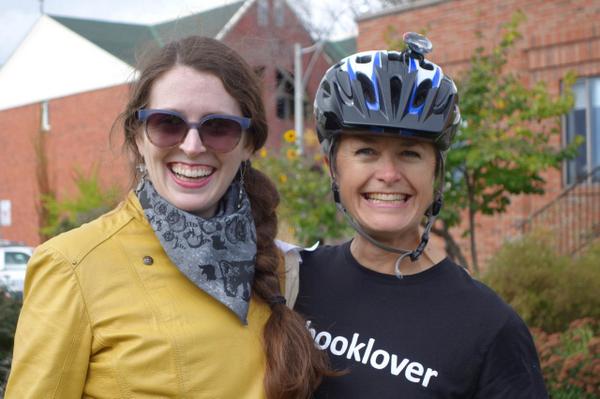 In an exciting new partnership, the Festival Of Literary Diversity (FOLD) has teamed up with The Reading Line, a non-profit organization combining group bikes rides that highlight accessible cycling and literacy, for a “Book Ride” along Brampton’s Etobicoke Creek featuring readings from local authors. We reached out to co-founder and outreach director Janet Joy Wilson to ask about the Reading Line’s history and their upcoming rides.

For starters, can you tell us a bit about the founding of the Reading Line and what the motivation was?

The idea was the brainchild of myself and Amanda Lewis, co-workers at Penguin Random House Canada in 2014 who discovered they were also both avid cyclists. Together we decided to “create something” based on our mutual love of cycling and books.

The Reading Line’s first bicycle and book ride in October 2014 came about because Amanda was involved with the Green Line initiative, which is dedicated to creating a public space/parkland in the hydro corridor north of Dupont St., and because I wanted to get the word out that Toronto book shop Book City had opened a new location in their old stomping grounds. That cool fall day gathered 75 interested people in a dialogue about linear parks with Park People and finished with the importance of community gardens with Co-editor of The Edible City, Christina Palassio.

Once you execute an unusual event everyone asks “what’s next?”

So we wrote a mission statement ... Making our city a better place, one street and one book at a time. 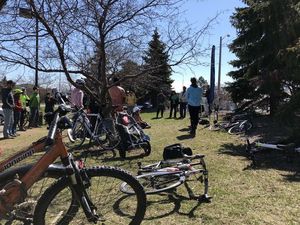 There are a finite number of hours in the day as we work full time while programming a free Book Ride including outreach to the community.

Our motivation is to share. Like a great book that you want to talk about, we want to introduce readers to new writers and provide a safe group ride while possibly cycling next to your new favorite author to continue the conversation.

The Book Ride advocates for infrastructure improvements while book lovers cycle through the streetscape. If someone who doesn’t usually ride a bicycle has a great time then that experience will inform their thoughts on the need for safe streets for all ages on bicycles. And if they are a driver they will then have the two-wheel perspective. 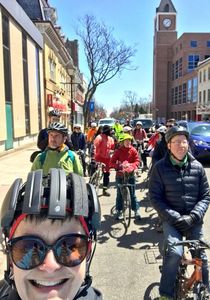 How do you tie in books to your rides? For example, your upcoming ride, this August, is in celebration of the 100th anniversary of the Bloor-Danfoth Viaduct. What kind of literary content can riders expect?

On October 18, 1918 the Bloor Viaduct opened and a photograph of a lone bicycle rider was captured (City of Toronto Archives).

My dream is to have Michael Ondaatje read on the Bloor Viaduct at our free Book Ride on Sunday August 26, 2018.

In 1987 he wrote "And the cyclist too on his flight claimed the bridge in that blurred movement, alone and illegal. Thunderous applause greeted him at the far end."

Our goal is to promote the history of the Viaduct’s construction and the role that immigrant communities played in building a key piece of architecture and infrastructure that is essential in bridging the “two divides” of Toronto: east and west. 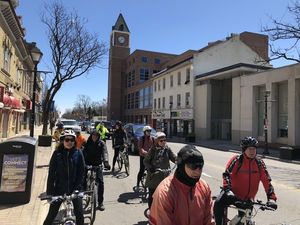 Our unique reading series provides the opportunity for participants to see the city and the Viaduct from a new perspective: from the seat of their bicycle, through authors’ words and in locations newly imagined as reading salons.

We will be sharing our program later in May but I’ll share with you that it will reflect Toronto with new and established writers living in Toronto using fiction, memoir and graphic novel as their platform to share stories.

One author will share her perspective of being a child of parents from Hong Kong; another has a harrowing escape from Ethiopia and trek across the desert; there’s a memoir of a woman’s journey from Brazil to Canada to marry a Greek man she barely knew interspersed with her journey through infertility, loss and miracles; and we’ll have an original graphic novel broadsheet depicting author/illustrators personal stories only available on the Book Ride!

We bring together a critical mass of people who enjoy riding a bicycle, we show politicians that Torontonians want to get out and ride but are held back by a lack of cycling infrastructure and connected, safe routes.

We introduce readers to writers within the landscape of Toronto’s streetscape. 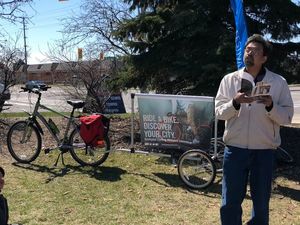 Are there any bicycle inspired or themed books that you love and would want to recommend?

Short answer is no. I read novels and memoirs that move me emotionally.  Although Dionne Brand’s novel What We All Long For has a paragraph that believe captures the feeling of cycling in the city.  Here’s the bicycle bits: “She hurtled through the upscale region of High Park, the old British-style house. … The handlebars of the bike were like her own bones, and like her bones she bent the brace toward the park itself. … She left the drama of the shocked driver and skewered traffic behind. If she could stop, she would have, but she was light and light moves.”

What I enjoy is when a character in a well-written novel gets on their bicycle without it being a political action. Do you remember learning to ride a bicycle when you were a kid? I do. It was a moment of wind in my hair and freedom. I have been on and off a bicycle throughout my life and every time I travel through space on a two wheels I feel like that little kid again. 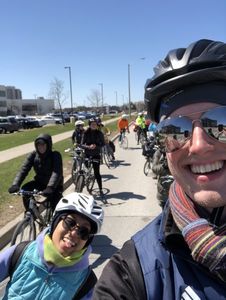