Aaron Schneider's debut story collection What We Think We Know (Gordon Hill Press) asks readers to consider the genre through the lens of the title. What do we know about the short story? Schneider plays fearlessly with the form, taking readers through fragments and shifting perspectives, even including tables and charts at points.

The innovation feels witty and wise, supported by the themes, and at times is just flat out delightful, with literary takes on scientific posters, footnotes, and student loan interest. Beneath the experimental glee is a strong spine of emotion, as a protagonist that blurs the line between character and author delves into a troubled family relationships and the concept of home.

We're excited to welcome Aaron to Open Book today to talk about What We Think We Know as part of our Keep it Short interview series for short story authors.

He tells us about a fatalistic moment in a basement office that led to his first publication, researching the storage of nuclear waste for his writing, and why part of his writing process involved a memorable battle with an unexpected type of software. 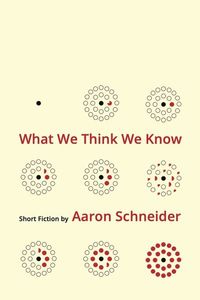 The collection includes most of the stories that I have written over the past six years. The first story in the book happens to be the first story that I wrote. This wasn’t planned—it simply worked out that way. At the time that I wrote that story, I had nothing published, and no sense that I ever would. I have a very clear memory of sitting in a windowless basement office at a university where I was teaching on contract using the office hour to which no students ever came to send it out to journals. Submitting it was an act of fatalism: I had no expectation that it would be accepted let alone that it would lead to this collection. I was able to send it out because I had decided in advance that it would be rejected, so there is something quite special, and also more than a bit surreal, about seeing it become the first story in this book. It is part of a triptych of three stories that opens the collection, and the third story was written specifically for the book to complete the triptych, so the first three stories bracket the period during which the collection was created and track my progression from more conventional towards more experimental forms of writing.

Deciding what was included in the collection was a process of elimination and transformation. I sent my publisher, Jeremy Luke Hill, everything that I had. We cut a couple of stories that didn’t fit the tone of the collection or that were thematically too close to other stories, and then I worked on bring the remaining stories in line with the aesthetic of the book. There were a number of pieces that ended up being quite substantially re-written, either because I wasn’t entirely satisfied with them, or because Jeremy wanted me to push them a little further. One of the things that I appreciate about working with Jeremy is his commitment to experimental writing. The process of re-writing was often a process of moving a story further and further away from the conventional short story form, into territory that, had I been submitting them to journals, would virtually guarantee their rejection, and it was Jeremy’s enthusiasm for experimental writing that gave me the room and the confidence to do this. I knew a piece was finished, that I had taken it as far as it needed to go, and that it was ready for the collection when I would send it to him, and he would send back a one-word email, “cool.” No salutation. No closing. All lower case. The stranger a story got, the more likely it was to get this terse, but affirming reply, and a number of the pieces in the collection owe their final form to Jeremy’s support for my experiments.

The title of the collection, What We Think We Know, comes from the title of the story “What We Think We Know About the Life and Career of Kathleen Scholler.” It was initially an intuitive choice. After trying and dismissing several dozen possible titles, this popped into my head, and it fit. I couldn’t say at the time why it fit, but it felt right. As the book has gone through the editing process, and I have had a chance to live with the title and see the way it sits against the finished stories, I have started to understand how it captures how many of them play with the instability of knowledge, how they push at and sometimes past the limits of certainty. The events in them come to the reader second and sometimes third hand. Lives are sketched out with facts and then filled in with conjecture. In at least one story, all that is definite are the questions the narrator asks about the protagonist. I’m quite happy with the way in which the title gets at this aspect of the book.

What I like most about the short story is that it doesn’t exist, or, if it does exist, it does so only as a set of somewhat arbitrary boundaries—a minimum and a maximum word count, although even those are flexible—within which there is an enormous amount of space for experimentation and exploration. Part of my aim when writing the stories in this book was to find new ways to make use of that space. The result includes a story that takes the form of a scientific poster, a story written as a series of questions, and a story told by a collective narrator made up of everyone who knew the protagonist in grad school.

This openness is both what I like most about the short story and what I find most challenging about it. Each story is a process of discovery, of finding and learning a new form, and that process can be frustrating, terrifying, and, when it works, thrilling. A number of the stories in the collection have gone through a series of fairly substantial changes before being finished. For example, the lone piece of autofiction in book, began life five years ago as longish, but fairly conventional short story. As I worked on it, it moved from fiction to autofiction, the narrative broke apart into a series of loosely connected fragments and it grew from a story into a novelette.

I did a fair a bit of research, but it took place over half a decade, so it didn’t feel like a lot. The research that I set out to do intentionally is less interesting than the number of times useful information fell into my lap. For example, a piece in the collection mentions the plan to bury spent nuclear fuel in the bedrock near the Bruce Nuclear Power Plant. One summer, I was teaching a writing course for graduate students, and I discovered that an engineering student in the class was working on testing the materials that are going to be used to make the containers for the fuel. It was pure chance that he happened to be in my section. I spent the six weeks of the course teaching him grammar and he spent them teaching me about storing nuclear waste. I have been lucky enough to benefit from coincidences like that more than few times.

This is probably a slightly strange thing for a short story writer to say, but the stories in this collection are a little bit strange as short stories go: the moment that I most remember during the writing process was struggling with Microsoft Excel. The third story in the collection uses a range of charts and graphs to track its protagonist’s life over the course of two decades. Generating the data for these figures, doing things like sorting out how interest compounds on student loans, and making decisions about how to visually represent the emotional permutations of her relationships was as painstaking as it was challenging, but taking all of that and getting Excel to produce what I wanted was one of the more frustrating things that I have ever done.

Aaron Schneider is a Founding Editor at The /t?mz/ Review and was a Founding Editor at The Rusty Toque. His stories have appeared/are forthcoming in The Danforth Review, Filling Station, The Puritan, Hamilton Arts and Letters, and Prolit-. His story "Cara?s Men (As Told to You in Confidence)" was nominated for the Journey Prize by The Danforth Review. He runs the Creative Writers Speakers Series at Western University. His first book, Grass-Fed, was published by Quattro books in the fall of 2018.

What We Think We Know

Aaron Schneider’s What We Think We Know is a debut collection of short fiction that tests, expands, and sometimes explodes the limits of the short story, setting conventional forms alongside fragmented narratives, playing with perspective, and incorporating the instruments of data analysis (figures, tables and charts) into literary fiction. Here you’ll find a satirical take on a scientific poster, a triptych of linked pieces that use footnotes, figures, and financial data to unfold the loves, dreams and disappointments of their shared protagonist, an autofiction novella that digs into the author’s fraught relationship with his father, and a lyrical novelette that explores the life of a family through an extended description of their home. At once experimental and deeply human, What We Think We Know is an accomplished exploration of the possibilities of fiction.