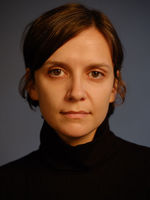 Once upon a time, not so long ago, Jane was more than a name. It was an organization, an underground, a password. It was the anonymous name for all the women involved in the underground abortion movement, particularly in the 1960s Chicago, before changing laws finally gave women control over their own bodies.

The story of these brave "Janes", the women who performed abortion services, became the inspiration for Aimee Wall's powerful debut novel, appropriately titled We, Jane (Book*hug). Following Marthe as she travels home from a rootless existence in Montreal to a small Newfoundland community where the Jane network continues to operate in the face of lacking resources, We, Jane is a story not only of the courageous fight for an essential human right, but of intergenerational connections between women, rural living, and the realities facing idealists.

As abortion rights slide dramatically backwards around the world – most notably in the United States – stories like Wall's become more and more urgent. We're proud to welcome her to Open Book today to discuss We, Jane as part of our Long Story series for novelists.

She tells us why there was no question of the setting of her story being anywhere other than her home province of Newfoundland, the character from the book who she misses to this day, and why it was complicated to research a cause where secrecy was paramount.

The opening of the novel remained almost unchanged from my very first drafts. Before I really figured out the rest of it, I had this idea of a shifting, multitudinous Jane, inspired by the real story of the Jane collective in Chicago in the late ‘60s, and I was thinking of trying to use point of view to show this sort of sliding in and out of belonging to a “we”—I was playing around with shifting back and forth between the first person singular and the first person plural and eventually abandoned that idea but the first pages writing toward that remain.

The setting was so integral to the story that it wasn’t really a case of choosing it. When I started thinking about a modern-day Jane, it just felt obvious to have them working in rural Newfoundland, where access to abortion can still be far from simple and private. And beyond that, I just kind of always knew I was going to write about Newfoundland—I’ve been living in Montreal for almost ten years and it plays a role in the novel as well, but a large part of my imagination still lives at home in Newfoundland.

I wrote the final chapters of the novel in one slightly feverish rush when I was finally finishing the first draft and, somewhat like the beginning, the ending remains pretty much unchanged from that first draft—it took me a long time to get there but once I did, I felt I had it, and I didn’t want to work and rework it and end up editing all the rhythm and the energy out of it.

It’s a strange thing, but yes. I had drafted the first section of the book and then gotten stuck and was writing and rewriting it and trying to find the next door to move through and then the figure of this older woman, Trish, just kind of appeared to me and she both grounded the whole story and also let me figure out how to move forward, and I became weirdly attached to this sturdy figure in my head. I kind of miss her now.

I did a lot of research in my own slightly haphazard way. I started by trying to learn what I could about the original Jane that operated in Chicago, and then about other people who were working for reproductive justice in these outside, underground ways back then, both in the U.S. and in Canada. I read a book about the abortion caravan that drove from Vancouver to Ottawa to disrupt the debate in the House of Commons and lay a coffin topped with coat hangers at the Prime Minister’s front door; a biography of Henry Morgentaler that tracked his whole career; academic articles about the state of reproductive justice in different parts of Canada in the years since the Supreme Court decision was struck down...

For obvious reasons, it’s kind of hard to find out a lot about people who were providing abortions illegally years ago, so I couldn’t really draw on documented accounts of anyone in Newfoundland who might have been doing this kind of work. So I tried to read around it, about midwifery and health care in rural Newfoundland, activism in St. John’s. I probably spent months reading and taking notes and eventually had to stop myself because I had started doing research to open things up for myself, figure out where the novel could go, but I felt that there was a danger, too, in researching too much, that I might start closing doors to myself by feeling beholden to the facts.

Aimee Wall is a writer and translator. Her essays, short fiction, and criticism have appeared in numerous publications, including Maisonneuve, Matrix Magazine, the Montreal Review of Books, and Lemon Hound. Wall’s translations include Vickie Gendreau’s novels Testament (2016), and Drama Queens (2019), and Sports and Pastimes by Jean-Philippe Baril Guérard (2017). Originally from Newfoundland, Wall lives in Montreal. We, Jane is her first novel.

A remarkable debut about intergenerational female relationships and resistance found in the unlikeliest of places, We, Jane explores the precarity of rural existence and the essential nature of abortion.

Searching for meaning in her Montreal life, Marthe begins an intense friendship with an older woman, also from Newfoundland, who tells her a story about purpose, about a duty to fulfill. It’s back home, and it goes by the name of Jane.

Marthe travels back to a small community on the island with the older woman to continue the work of an underground movement in 60s Chicago: abortion services performed by women, always referred to as Jane. She commits to learning how to continue this legacy and protect such essential knowledge. But the nobility of her task and the reality of small-town life compete, and personal fractures within their group begin to grow.

We, Jane probes the importance of care work by women for women, underscores the complexity of relationships in close circles, and beautifully captures the inevitable heartache of understanding home.