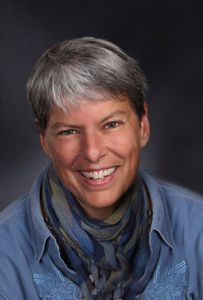 It's no surprise that in a novel called The Madrigal (Inanna Publications), music is front and centre. Frederick (who shares a surname with the title) and his mother are both singers - but they experience music very differently. Frederick sneaks out to busk for change in dark bars and clubs, while his mother sings alone in their house. Their relationship is mysterious, their home full of secrets. When we encounter Frederick again as an adult, now his mother's caretaker, the secrets have grown with him, and the past is catching up.

Author Dian Day has crafted a fascinating, uncanny, deep novel in The Madrigal, exploring solitude, memory, talent, family, and more. It asks questions about identity and loyalty and what happens when the gift that makes you who you are also happens to be your curse.

We're excited to welcome Dian to Open Book today to talk about The Madrigal as part of our Lucky Seven series. She tells us about encountering Frederick in a fixer upper she toured, the importance of snacking while writing (we agree!), and about travelling back 300 years for her next book.

Frederick, The Madrigal’s protagonist, was a bit of a surprise to me. He started to appear in corners of my mind even as I was finishing my previous novel, The Clock of Heaven. I could see his shadow as an adult, conducting a choir, delivering the mail, pushing his still-young mother in a wheelchair through windy city streets. Then one day I met the child Frederick in a desolate ‘handyman’s special’ being shown to me by a real estate agent. The renters stayed in the house as we viewed it, perhaps because of the enormous effort that would have been required to round up and herd all those energetic boys to an alternate location. The youngest boy, who showed me proudly around his home, was a piercing spark of light in those squalid rooms. I didn’t buy the house, but I did need to write about how that boy got out of that life. What I didn’t fully understand when I started is that all transformations have a cost, and some of the things we think we’ve left behind echo for the rest of our lives.

I never have any sense of casting about for a character; it is more like an unfolding or a coming-to-know someone who already exists. The dominant feeling I have in this process is one of curiosity: Who is this person? How will they reveal themselves? What stories do they want me (or need me) to tell? I live with them for many months before I start to write. Frederick got very insistent.

There are a number of central, related questions: re-evaluating our histories, forgiving ourselves, atoning for our past actions, finding courage, and going on anew. With Frederick’s help, I wanted to explore if and how we can move beyond past traumatic events, especially if we hold ourselves responsible for them. Frederick is forced out of his neatly-wrapped, over-packaged life through a series of seemingly random occurances. Writing the book was a matter of watching him closely as he finally, gradually, let himself remember and feel. I knew when I started writing where I hoped he would end up; I didn’t know how we would get there.

There was a point in the writing, fairly early on, when it looked like I was making a story about childhood sexual abuse. I deliberately made a turn away (or largely away) from that theme. It was not, for me or for Frederick, central―any number of things may have happened in his childhood to produce a similar result in the man―and I worried that its presence in the story would override other elements for many readers. Additionally, a few fairly major characters disappeared entirely (one, being sorely missed, was returned.) On a couple of occasions, I had to quite deliberately write myself out of a corner; unexpected things happened in Frederick’s story that I never would have anticipated.

I don’t seem to write a book all in one go. There are periods of intense writing followed by months or years of going off to a job every day, or renovating a house, or taking care of an ailing parent… The Madrigal took about a focused year and a half to write, spaced out over five or six years.

I need profound quiet; long stretches of unstructured time; my computer; a good, small, thin-lined notebook with a hand-drawn, thematically-appropriate cover (thanks to my oldest daughter), and one of my favourite pens; frequent very hot tea with a little milk and a plain biscuit; hardly any company; long solitary walks in the woods and along the beach with the dog; and good books to read, both fiction and non-fiction. I need not to feel hunger, so I do eat regularly―like clockwork, one might say―but when I am actively writing I hardly care at all what I eat.

I allow myself to feel discouraged (it’s often a discouraging business), but I remind myself that ‘this too shall pass’ and that even a few hundred words a day adds up to walking oneself up the hill and over the hump. Even when I’m quite sure I’m writing drivel, the light of a new day often makes the words seem a little brighter. When it’s really bad I take a break without berating myself too much. There are lots of other important things to do.

I crave character-driven stories grounded in credible worlds. A great novel pulls me into the lives of the main characters on the first page and carries me along relentlessly like a muddy, swirling tide. A great novel also uses brilliant language, and a keen and unexpected humour, to bring me up short, gasp out loud, and pause in awe, before proceeding. I’ve been reading a lot of historical fiction lately―part of my next novel, Tintamarre, takes place over three hundred years ago―and have just discovered the Aubrey-Maturin series written by Patrick O’Brian, set fifty years later than mine, and in a very different location. O’Brian’s characters are drawn so brilliantly that I don’t care that I don’t know what a carronade is, or what it means to “miss stays,” or remember which is the foretopgallantmast no matter how often I look at the picture. He can describe an entire and thoroughly unfamiliar scene of high seas action where I understand little of what’s going on besides the protagonists’ emotions; but still, I believe myself to be there and can’t put the books down. I also read a great deal of non-fiction. I’m reading Roxanne Dunbar-Ortiz’s An Indigenous Peoples' History of the United States and finding it just as compelling. It’s an exceptional and important book.

For the past year and a half, I’ve been trying to do two things more or less simultaneously (which, by the way, hasn’t been working all that well): finish my (half done) third novel, Tintamarre, and finish my (half done) cultural studies doctoral dissertation, Eating Alone. I’ve just had a spell of focusing on the novel, because I was lucky enough to be awarded a creation grant from Arts Nova Scotia. In the coming months, I’ll be concentrating on the thesis and its defence, and hope to get back to the book in the new year. I’m also planting my veggie garden!

Dian Day is the author of the award-winning novel The Clock of Heaven. She lives with her partner in rural Nova Scotia.

Meet Frederick Madrigal: the seventh son of a struggling woman on welfare who already had three sets of male twins spaced two years apart. A one-time child prodigy, Frederick was the subject of the benevolent index finger of God. While his older brothers ran wild, the sensitive and musically gifted Frederick began to sneak out of the house to sing for spare change in front of city bars and nightclubs, his repertoire learned from his mother’s secret midnight singing. Through the intervention of a number of well intentioned benefactors, he ends up in a church choir, and from there, at the age of twelve, is drafted into a choir school in Toronto. He's happy to go, and leaves his mother and brothers behind without a thought. But just after his eighteenth birthday, in public, Everything Crashes Down, and in another miraculous escape, he chooses against his musical destiny. In mid-life, Frederick is deliverer of Canada Post mail; teacher of Voice; keeper of secrets; caretaker of his demented mother; lousy with dates. Still, it appears that everything is more or less satisfactory and under control ... until God once again starts pointing— but this time He seems a little cranky. The Madrigal is a work of literary fiction that explores the experience of solitude, the meaning of extraordinary talent, and the role of memory throughout our lives. Rather than a coming of age story, it is a "coming to terms story," as Frederick must let go of the unfulfilled expectations of his childhood and find deliverance from the tragic end-of-childhood events he believes he carries responsibility for. In doing so, Frederick brings a unique twist to a timeless journey of self-forgiveness and relationships with other.